We’re afraid you’ll have to wait a little more for concrete proof of next-gen Nokia phone specs, as the D1C turns out to be a huge tablet.
Published 13 October 2016, 07:13 EDT

While it’s no longer a big secret the first Nokia-branded smartphones in around two years are definitely coming soon, that D1C prototype recently making the customary pre-release benchmarking rounds is probably not it.

Geekbench and AnTuTu already revealed plenty of things about what looked like a respectable mid-range Android handheld, but one feature neither performance-testing tool was able to uncover was screen size.

As it turns out, this Nokia D1C (name probably subject to change) sports a ginormous 13.8-inch display with decent 1,920 x 1,080 pixels resolution, aka Full HD, at least according to GFXBench-divulged data.

Pretty much everything else falls in line with what we knew about the giant, including Nougat software, octa-core Snapdragon 430 processing power, 3GB RAM, and an 8MP front-facing camera. The rear shooter however is listed as incorporating 15 (or rather 16) whole megapixels instead of just 13, whereas internal storage takes a bit of a dive, from 32 to 16GB (only 9 user-accessible). 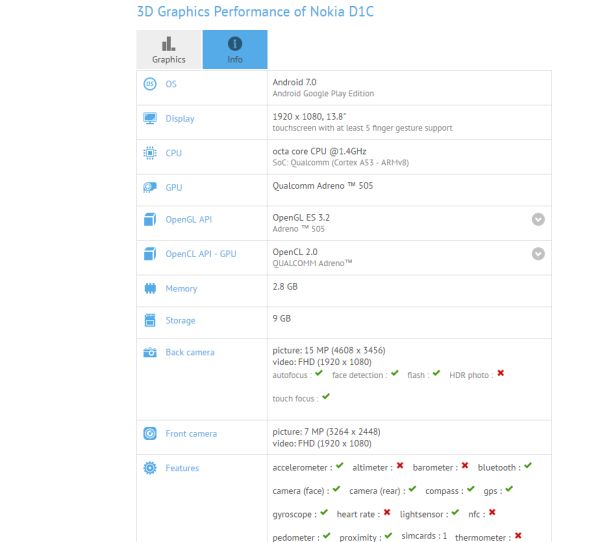 The unusually large footprint builds up hope the Nokia D1C might be more than a modest slate, perhaps following in the footsteps of the compact early 2015 N1 with a keyboard cover or some sort of docking station added in the mix. Oh, and (optional) cellular connectivity is a given.

It is tipped to pack a 4,200mAh battery with 30W fast charging support.