Check out what just might be the first pics to arrive of Nokia’s upcoming metal Windows Phone model.
Published 17 April 2013, 16:31 EDT

Nokia’s next round of Windows Phone models have been the subject of rumors for months now. The Lumia 928 looks nearly ready to launch, and while the xenon flash sounds great, it’s hard to get excited over a phone that’s essentially last year’s 920. Some of the other Nokia models we’ve been talking about could have some more compelling hooks: the EOS with its 41-megapixel PureView camera, and Catwalk, with a body crafted out of aluminum. So far, we’ve yet to get a look at either, but there’s a chance that may be changing today, upon the publication of a pair of photos that may show off Catwalk in the flesh.

Well – it’s a little odd, is what it is. While the trappings of Nokia design are present, some of what we see here is pretty unexpected. First off, this doesn’t look like it’s metal all over – the edge could very well be aluminum, and for that matter the internal framework, as well, but the back appears to be plastic.

Then there’s that port on top. It could be HDMI (which we’ve already heard rumored for the EOS), but if it’s micro USB, that’s a weird place for a Windows Phone handset to place it.

The camera bulge is unusual, too, looking more at home on an HTC model. We can also seen an LED flash, rather than another xenon like we might have hoped.

So, could this be real? It’s hard to say. It’s a little concerning that the capacitive buttons are just out of frame, when they should have been so easy to include; was there a reason that portion of the shot was cropped? For the time being, we’re really not sure what to bet on. 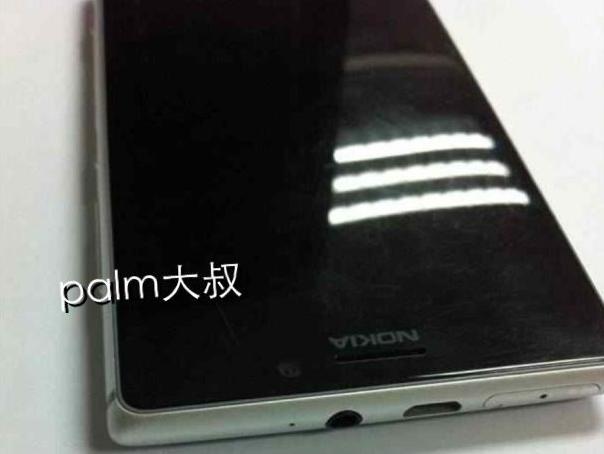