Tweaking Touchscreens: The New Hotness Apple, Nokia, and Sony are Bringing to Displays

We don’t yet have touchscreens that can provide artificial textures, but they’re not far off. In the meantime, read on to see what Apple, Nokia, and Sony are doing to improve today’s smartphone and tablet displays.

Touch screens are on the verge of getting ridiculous.

In the beginning, there was resistive technology – a sensor layer adhered to a smartphone display that detected pressure from a stylus or fingernail and reacted accordingly. Then, amid a few transitional technologies like the heat-sensing buttons on some of the dumbphones from LG’s more aspirational period, capacitive display technology burst onto the scene. LG actually beat Apple to the punch on that one with 2007’s Prada, but it was the original iPhone, launched the same year, that catapulted capacitive-touch technology into widespread popularity.

Since then, the world of smartphones and tablets has seen remarkably little development in touch-input technology. Sure, the underlying displays have matured significantly, with today’s panels offering pixel density so high it’s impossible to make out individual dots, and resolution as high as some desktop monitors and TVs. Companies like Apple and HTC have since thinned out the display component in some of their products by bonding -or “laminating”- the screen directly to the glass layer, and products like Samsung’s Galaxy Note lineup have started incorporating pressure-sensitive digitizers for stylus input. But putting those exceptions aside, touch-screen technology has otherwise remained largely unchanged since 2007 from the end-user’s point of view.

That could all change in the coming years as companies like Senseg and Immersion seek to reshape the boundaries of what a touchscreen can do. According to a Guardian piece from last spring, Senseg’s technology uses a high-voltage, zero-current electric field to manipulate the Coulomb effect, simulating tactile response on touch screens.  This application creates a kind of variable artificial friction, giving users the sensation of texture on what’s actually just a smooth glass panel. 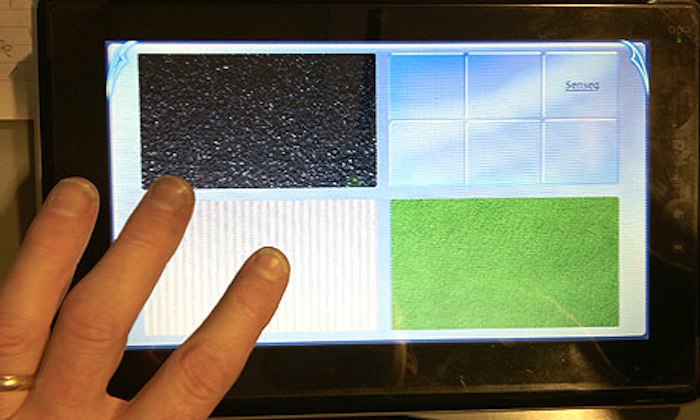 Immersion’s technology is more traditional in its haptic-feedback underpinnings, relying on the familiar piezo motor to vibrate parts of a device at specific frequencies. But, notes AllThingsD in an article from last March, it has the advantage of not requiring special software to accommodate it, and it’s already shipping in some consumer products. Don’t count Senseg out, though; the company may lag behind its more traditional competitor, but as of springtime it “expected to be” in a product released by the holidays, and CTO Ville Makinen said in an interview with Trusted Reviews that the company was “talking to a ‘tablet maker in Cupertino’.”

As exciting as all that (now somewhat dated) speculation is, it’s vaporware until we see an official product announcement. And as jazzed as I always am to discuss cool scientific concepts like the Coulomb Effect and how applying enough voltage can anchor a finger to a glass display, this isn’t a speculative piece. This is about the here and now, and the soon-to-come. Fortunately, while the developments coming down the pike in the next few months aren’t as earth-shattering as the possibilities outlined above, they’re still pretty cool. I contrasted Apple and Nokia in a piece I wrote yesterday about choosing a Lumia 920 over an iPhone 5, and living in a country where Sony’s mobile presence is sparse, I don’t usually talk much about that company. But today, that’s different: there’s actually something to talk about.

We were there at IFA for the unveiling of Sony’s new Xperia lineup, but not much was said about the Xperia V. In addition, as we discussed in our IFA wrap-up article and our Pocketnow Weekly episode covering the show, the Sony reps weren’t getting all the facts straight amidst the chaos – and we weren’t fact-checking well amid all our jet lag. We might’ve paid a bit more attention to the water-resistant phone, though, if we’d known it featured sensor-on-lens support in its display. 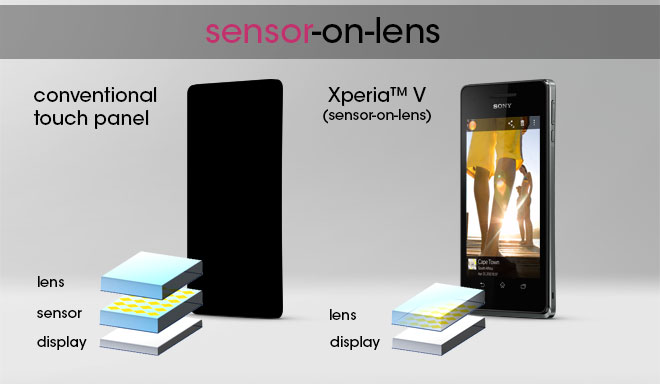 Sensor-on-lens isn’t necessarily a groundbreaking development; as mentioned above, we’ve seen laminated display technology before. Sony’s implementation offers about a 5% improvement in illumination, but the real story lies in the reduction of weight and thickness, as well as glare amelioration and the user-experience bonus feeling of “really touching the screen.” We should have some hands-on time with the technology soon, at which point we may draw up a few comparison pieces. If you’re nice.

Sensor-on-lens is a technology similar to, but not the same as, the new display hardware Apple is using for its new iPhone 5. Called “in-cell display,” the improved technology is sourced from LG and might play a part in the 44% improvement in color saturation Apple boasted at the iPhone 5’s launch event. 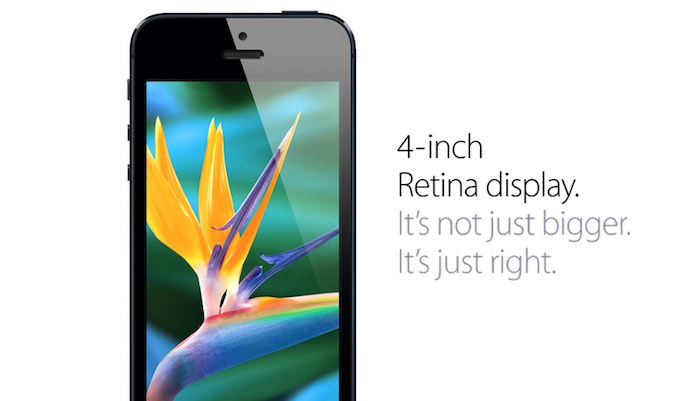 Once again here, most of the story is in weight and thickness savings, which allowed Apple to shave some grams and millimeters off the newest iPhone hardware. But that’s not all in-cell technology has provided for: the new sensor layout also allows for enhanced input accuracy, probably the source of Phil Schiller’s announcement-day claim that the new iPhone 5 now boasts “the most accurate display in the industry.” That subjective assertion might well be true, too; again, only hands-on testing will provide the answer.

Call me a fanboy, but the most interesting display-improvement promises I’ve seen lately have come from everyone’s favorite Finnish underdog, Nokia. 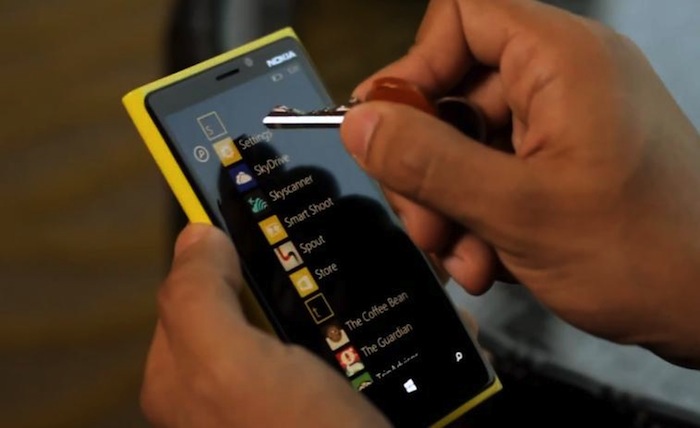 Last week’s Lumia 920 announcement didn’t just unveil the most important product of the year for Nokia -and possibly Windows Phone 8. It gave us a device with a lot of standout features, including a display featuring PureMotion HD+ for a “higher-than-high-def” resolution experience, a very high refresh rate, and an even-more-advanced version of Nokia’s ClearBlack technology. All that sits under a panel Nokia calls “Super Sensitive Touch,” powered by Synaptics’ ClearPad Series 3 enhanced touch support.

The brass tacks behind the buzz: a touchscreen that provides “ten finger fulltime tracking” as well as enhanced sensitivity. So enhanced that users will be able to manipulate the display while wearing gloves, with fingernails, or even with metal objects. For more details, hop over to our news section to see our own Stephen Schenck answer the question, “What’s Up With The Lumia 920’s Awesome Touchscreen Performance?”

So while we may not be on the cusp of touchscreens that feel like sand or which replicate physical keys (yet), the immediate future is still bright. Smartphone and tablet displays boast more nits, pixels, and touch sensors than ever before; each day we’re closer to being able to realize the dream of saying to our devices, “computer, enable tactile interface,” and feeling the warm wonder of artificial texture rise up under our fingertips.

Future-touchscreen speculation source: AllThingsD and The Guardian via Cracked.com