The Nokia 9 PureView is finally official. It comes with 5 cameras which capture the scene simultaneously to create the best results.

After plenty of leaks and anticipation, HMD Global finally announced the Nokia 9 PureView. It is the first smartphone in the world to ship with five main/rear cameras. The phone is built using 6000-series aluminum and Gorilla Glass 5, and it looks as premium as possible. It will go for an average retail price of $699, and it will ship with Android 9 Pie out of the box.

In terms of non-camera-related specs, the Nokia 9 PureView runs on the Qualcomm Snapdragon 845 chip. It might not be the current flagship application processor, but it sure is a fast chip, especially when paired with 6GB of RAM. HMD is using a 5.99-inch P-OLED Nokia PureDisplay with QHD+ resolution, and has equipped the phone with 128GB of non-expandable storage. 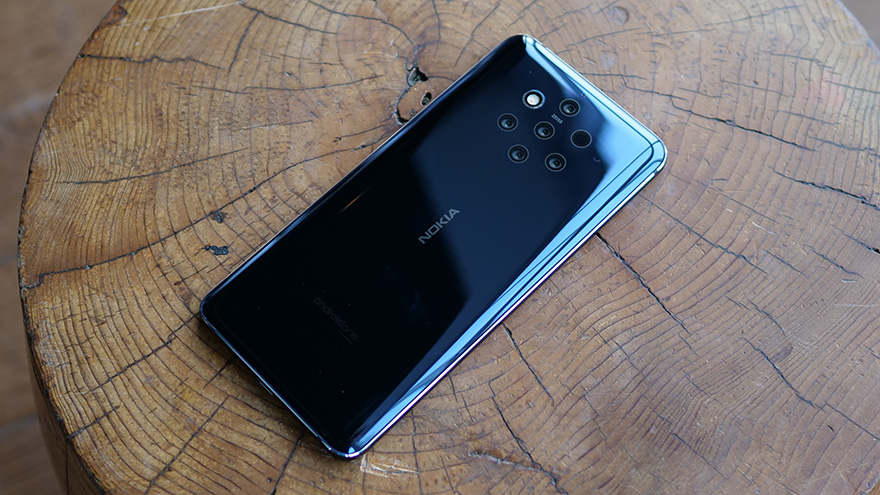 The Nokia 9 PureView is powered by a 3,320mAh battery, supports wireless charging and fast charging, it is IP67 rated for water and dust reistance, and offers Cat 16 Gigabit LTE network compatibility. Multimedia features also include the (by now) famous AOP (Accoustic Overload Point) microphones, the cameras (which we detail below), while security and biometrics are handled by an in-display fingerprint scanner.

The front-facing camera, which resides on the top bezel (no notch, no punch-hole, no cutouts), is a 20MP unit, but the back is where the magic happens. This is where the penta-lens camera arrangement is found, with five cameras employing ZEISS optics. There is no visible PureView branding on the phone, but the official name of the device includes it.

Every shot taken by the Nokia 9 PureView uses all five cameras to capture at least 60MP of imaging data. To process and fuse the images Nokia 9 PureView has maximised the heterogenous computing architecture of the Qualcomm® Snapdragon™ mobile platform assigning tasks across ISP, DSP, GPU and CPU. 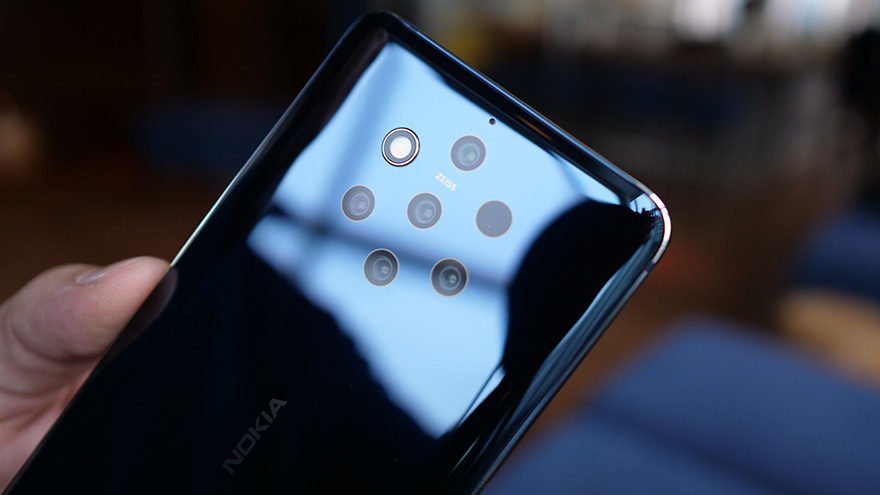 The five cameras are basically two of a kind combined with three of a kind, as follows:

This multi-camera approach is possible thanks to a chip (Lux Capacitor) made by Light, combined with the Snapdragon 845’s capabilities. The company recently made an announcement concerning multi-camera smartphones.

Every image captured on the Nokia 9 PureView is HDR, with up to 12.4 stops of dynamic range and a full scene 12MP depth map. This means each 12MP JPG image benefits from outstanding detail in areas of both bright sunlight and shade.

The main advantages of this approach is, according to HMD, dynamic range. With each mono sensor being able to carry 2.9 times more light, emplying three of these allows capturing almost 10 times more light than on a single sensor. Pictures are snapped at different exposures on each camera. The other advantage mentioned is depth of field. The (up to) 1,200 layers of depth data captured allows for accurate bokeh effects. We’ll dive deep into the camera performance once we start our review process.

There’s EIS (electronic image stabilization) on a single camera, for video purposes, and it can shoot 4K video at 30fps.

BARCELONA, 24th February – HMD Global, the home of Nokia phones, today announces the Nokia 9 PureView, featuring the world’s first five camera array with ZEISS Optics to put next generation computational imaging technology into the hands of photography enthusiasts. Every picture taken with the Nokia 9 PureView is HDR, all five cameras work together simultaneously to capture your image and Nokia 9 PureView fuses it together into one 12MP photo with outstanding dynamic range and unparalleled depth of field.

The Nokia 9 PureView features the world’s first five camera array system with ZEISS Optics. It has two colour sensors for accurate vibrant colour images and three monochromatic sensors which give sharpness and detail. All five sensors work together to collect up to 10-times the amount of light than a single sensor[i]of the same type.

Every shot taken by the Nokia 9 PureView uses all five cameras to capture at least 60MP of imaging data. To process and fuse the images Nokia 9 PureView has maximised the heterogenous computing architecture of the Qualcomm® Snapdragon™ mobile platform assigning tasks across ISP, DSP, GPU and CPU. Featuring a dedicated imaging co-processor that individually adjusts exposure and white balance on each camera across the scene, the Nokia 9 PureView gives you a glimpse into the future of smartphone photography.

“Nokia smartphones have always pioneered imaging innovation. True to that legacy, we are taking a significant leap forward in introducing the most advanced computational imaging system on a smartphone – the Nokia 9 PureView. Designed for photography enthusiasts, the Nokia 9 PureView is the only smartphone to capture images simultaneously from all five lenses to give you an image capture so rich that post processing possibilities are endless. On top, we bring power editing suites like Adobe Photoshop Lightroom and Google Photos depth editor right to your fingertip – now explore every detail with your Nokia 9 PureView.”

Every image captured on the Nokia 9 PureView is HDR, with up to 12.4 stops of dynamic range and a full scene 12MP depth map. This means each 12MP JPG image benefits from outstanding detail in areas of both bright sunlight and shade.

The unparalleled high-fidelity 12MP depth map created with each JPG enables beautiful Bokeh and provides the opportunity to explore your inner artist using Google Photo’s built in depth editor. Now you can re-focus, adjust blur and saturation across the scene, even after you have captured the shot.

Designed with the needs of photography enthusiasts at its heart, Nokia 9 PureView also features the ability to capture images in uncompressed RAW “DNG” format and edit them directly on the phone yourself thanks to our partnership with Adobe Lightroom. It has been said that 50% of the art of photography is in post-production and with Nokia 9 PureView you have every opportunity to shine.

Nokia 9 PureView features an update to our popular Pro Camera UI – delivering even more control over your photography. Now capture exciting time lapse photography with support for exposure times up to 10 seconds. In addition, the new Pro Camera UI on Nokia 9 PureView includes the ability to adjust the Exposure Value in increments of just 1/3rdof a stop, letting you adjust exposure compensation with more control than ever before.

Flagship experiences in a flawless finish

To top off the flagship-level quality and attention to detail, the Nokia 9 PureView has a flawless finish that radiates the thoughtful design you expect of every Nokia smartphone. All five cameras are seamlessly integrated into the 8mm slim phone ensuring there is no camera bump. Be assured that the Nokia 9 PureView will get through the knocks and mishaps of real-life with a 6000 series aluminium chassis with our signature dual diamond cuts and the Corning® Gorilla® Glass 5 on the front and back.

Pure, secure, and up-to-date, AndroidTM9 Pie reinforced with Android One

The Nokia 9 PureView launches with Android 9 Pie out of the box. It joins the comprehensive line-up of Nokia smartphones in the Android One family, which means it delivers the latest Android innovations and software experiences. Nokia smartphones with Android One offer great storage and battery life right out of the box and come with three years of monthly security patches and two major OS updates.

Android 9 Pie includes AI-powered features to make your device smarter, faster and adapt to your behaviour as you use it, so your smartphone experience gets better with time. The Adaptive Battery feature limits battery usage from apps you don’t use often, and App Actions predicts what you’re about to do so you can get to your next action quickly. These features further streamline your device’s functionality and your overall Android experience.

The Nokia 9 PureView will receive three years of monthly security patches and two major OS updates, as guaranteed in the Android One program. In addition, Google Play Protect scans over 50 billion apps per day to keep your phone safe from malware, making the Nokia 9 PureView among the most secure phones on the market. It also comes with easy access to helpful innovative services including the Google Assistant, which helps you get things done throughout the day, as well as Google Photos with free unlimited high-quality photo storage.

The Nokia 9 PureView is available in Midnight Blue and will retail for an average price of $699.[/toggle][/toggles]