Detailed list of Nokia 9 features surfaces online, but is it too good to be true?

We’ve been waiting and waiting and waiting for HMD Global to unveil a “true” Nokia-branded Android flagship, but although the 8 Sirocco is certainly a thing of beauty, its use of a Snapdragon 835 processor doesn’t quite put it on the same level with the new wave of SD845 powerhouses.

Sooner or later, the Nokia 9 has to break cover, and when it does, a freshly leaked list of detailed features and specifications anticipates a major “camera revolution.” It obviously makes sense for a Nokia handset to challenge the imaging greatness of the triple lens Huawei P20 Pro, bringing the classic PureView family’s 41MP shooter back from the dead.

This time around, we’re apparently looking at a main 41MP rear-facing sensor with OIS, Xenon and LED flash, as well as similar f/1.5 – f/2.4 dual aperture technology as Samsung’s Galaxy S9+. That total beast of a primary camera could be combined with a 20MP telephoto lens also touting OIS, and finally, a 9.7MP monochrome sensor. 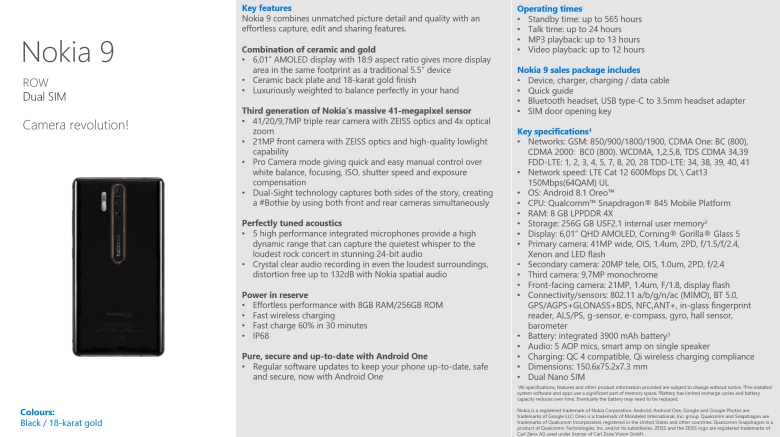 The whole thing should use state-of-the-art ZEISS optics and be able to produce 4x optical zoom, with a dreamy 21MP front camera also ZEISS-powered, endowed with f/1.8 aperture, as well as “display flash.”

Speaking of the display, the Nokia 9 is tipped to borrow its OLED technology from the 8 Sirocco, and the 18:9 aspect ratio from the 7 Plus, while upgrading resolution to QHD. A ceramic back plate and “18-karat gold finish” could make for a uniquely premium design, with a Snapdragon 845 SoC, a whopping 8GB RAM and 256GB internal storage in charge of “effortless performance.”

The almost utopian spec sheet is completed by fast wireless charging capabilities, IP68 water and dust resistance, Android One support (with 8.1 Oreo pre-installed), a massive 3900 mAh battery, “in-glass” fingerprint recognition, and 5 “high performance integrated microphones.” It’s all a little too good to be true, if you ask us, so you may want to consider the possibility of some overly enthusiastic fan trying to play a (particularly cruel) prank on the tech media.