Who can rain on Samsung’s pre-MWC 2018 parade? As Huawei is widely expected to wait until April for the official announcement of the P20 trio (not P11), and LG still seems more likely to bring an upgraded V30 to Barcelona instead of an all-new G7, that pretty much leaves Sony as the only high-profile exhibitor with a flagship phone in the pipeline.

There’s also HMD Global, which has recently started teasing the launch of “awesome” new Nokia devices at this year’s Mobile World Congress. The Finnish company even had the audacity to schedule its event on the same day as the Galaxy S9 “Unpacking”, although it remains unclear if HMD truly wants to go after tomorrow’s high-priced hero smartphones.

In addition to a long overdue Nokia 9 high-ender, an ultra-low-cost Nokia 1, mid-end 4 and upper mid-range 7 Plus might see daylight soon as well. The unreleased Nokia 7 Plus is mentioned by name in a new Geekbench record, revealing possibly the handset’s most significant upgrade. 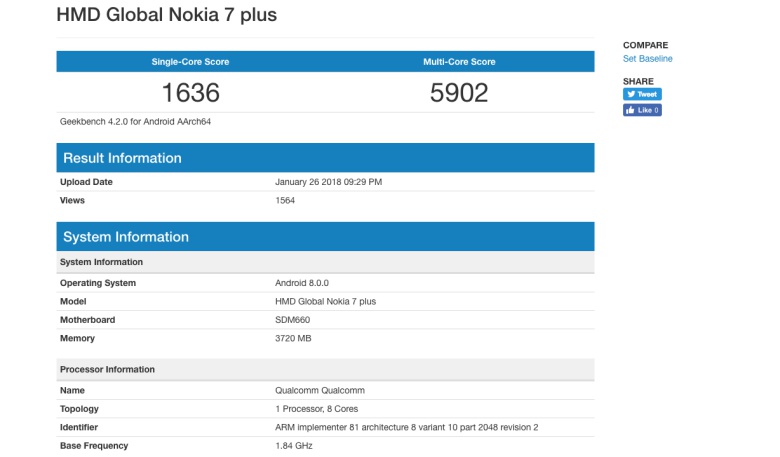 While the original 7 packs a Snapdragon 630 processor paired with either 4 or 6GB RAM, the 7 Plus apparently carries a Snapdragon 660 SoC, both chips capping off at 2.2GHz in clock speeds. They’re both octa-core arrangements also featuring lower-power 1.8GHz CPU nuclei, but the 660 substantially improves central and graphics processing performance.

Unsurprisingly running Android 8.0 Oreo already, the just-benchmarked Nokia 7 Plus prototype also packs 4GB RAM, although a 6 gig option is definitely possible. And so is US availability for a change.

Apple is now rolling out iOS 15.1 and iPadOS 15.1 to compatible devices, and it comes with the much-awaited SharePlay feature.

We keep getting amazing deals on great Android devices, starting with the Google Pixel 4, a couple of OnePlus devices and more

A new leak reveals the upcoming Galaxy Tab S8’s design and tells us some of the specifications that we can expect to see on the new flagship tablets.
YouTube 1.8M
Facebook 570K
Twitter 197K
Instagram 133K
RSS