You probably haven’t heard of NOA smartphones before, but you should have. This Croatian company sells affordable, premium-looking, feature-packed, mid-range handsets in Croatia and several other eastern European countries. Today we look at the NOA N10.
Published 04 March 2018, 11:42 ESTUpdated 02 April 2021, 14:11 EDT

The NOA N10 was unveiled just a day before the ASUS ZenFone 5/5z, making it (technically) the first Android phone to be unveiled with a trapezoidal iPhone X-like notch in the display. Unfortunately, while ASUS let show attendees handle the ZenFone 5, NOA kept the N10 behind glass. I convinced them to remove the glass cover for photos, but consider this more of a NOA N10 eyes-on.

Obviously, the screen’s the darling of the show here. It’s a 6.18-inch AUO 1080p panel, likely IPS, with an 18:9 aspect ratio and rounded corners. Interestingly, the ZenFone 5/5z and NOA N10 have more than the notch in common. The display on both handsets doesn’t actually cover the entire screen, leaving a vestigial bezel “chin” at the bottom. It’s rather puzzling and somewhat disappointing, honestly. 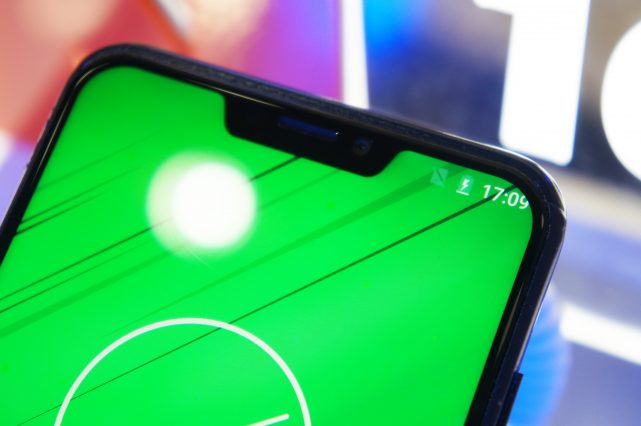 Design-wise, the N10 is basically an aluminum and glass sandwich, but it cranks things up a notch (haha) with a ceramic back panel. Fancy. It’s powered by a Mediatek Helio P23 (MT 6763) 2.3GHz octa-core processor and equipped with 4GB of RAM and 64GB of build-in storage, expandable via microSD. This is a dual-SIM, dual-standby 4G LTE phone running Android 8.0, with a 3600mAh battery under the hood, and DTS audio to keep things rocking.

On the camera front, the N10 packs three 16MP shooters, including two rear Sony IMX 499 sensors that enable portrait mode plus an oversampling feature that captures images up to 80MP. The 16MP selfie camera supports face unlock to complement the back-mounted fingerprint sensor. There’s no sign of a headphone jack, but the handset comes with a USB Type-C connector.

The N10 is shaping up to be a pretty cool mid-range phone that will be even more interesting when it launches for about €300 (US $369) later this year. It’s definitely a handset worth keeping an eye on if you live in one of NOA’s eastern European markets, so stay tuned.

Check out the latest deals available at Amazon, Samsung, and B&H, where you will find the Samsung Galaxy Z Flip 3 and more on sale

2022 MacBook Air could drop 'Air' branding and come with white bezels and a notch at the top.