HTC Seems To Be Ditching The HD7 From Their Windows Phone 7.8 Plans

There was a time when all of us at Pocketnow craved for the HD7, and as it turns out, now it seems that not even HTC wants to have a piece of it. Recently one of the proud few that still own a device asked HTC on Twitter if there are any specific dates as to when Windows Phone 7.8 will reach his device, and even though we were expecting the usual “it’s coming soon”, the response wasn’t that nice.

HTC responded that there are sadly no plans for the company to deliver Windows Phone 7.8, and the obvious “we’ll get back to you if something changes”. It’s hard to tell if this will be the end of the device, but it’s just frustrating to see how a device that has no problems in being upgraded will just be ignored. We wish it was easy to leave Microsoft out of this as well, but then you question the whole promise of Windows Phone as a “no excuses to upgrade” OS.

We’ll keep all of you 9 owners of the HD7 up to date if anything happens. Word of advice though, the Lumia 920 is worth every penny if you want to remain in the ecosystem. 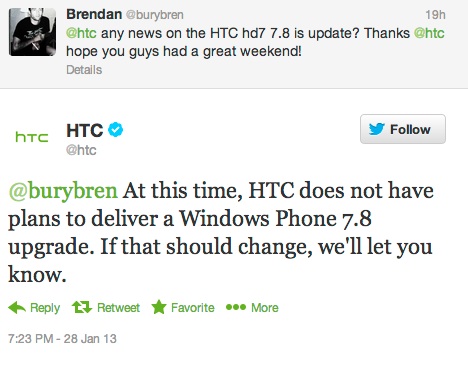