Is this an LTE-enabled Nexus 7 at the FCC?

Just yesterday, we were talking about the possibility of Google releasing a follow-up to last summer’s Nexus 7 in the near future. We’ve heard a little about possible specs, and just got some news about potential price points. Today, we get some of the strongest evidence yet for new hardware, upon the paperwork for a new ASUS tablet hitting the FCC.

OK, but ASUS makes plenty of tablets, right? Granted, but check out the info box below, where this model K009 is clearly marked as a Nexus model.

The hardware run-down that follows sure seems to match a lot of the rumors we’ve heard about a new Nexus 7. Those include the addition of a rear camera, initially lacking, and the upgraded SoC – that APQ8064 chip is a Snapdragon S4 Pro, like in the Nexus 4.

Battery capacity seems to hint at this being a seven-inch device, or at least generally in that range – it’s no 10-incher, at least. And you see that Qualcomm chip listed as the WWLAN module? The “L” on the end there indicates that it’s an LTE-capable radio.

If this is the new Nexus 7, it doesn’t sound too bad. We might have liked to see a slightly more modern SoC, but the option for LTE could be a nice touch. Now we just have to confirm rumors about the full HD screen.

Update: This K009 popped-up at the Bluetooth SIG as well, and those docs offer some additional insight. For one, they confirm a seven-inch screen, but they also mention the tablet running a Snapdragon 600 – more like the SoC we were hoping for. This could just be a typo in the FCC docs, as the 600 is the 8064T, versus just an 8064. 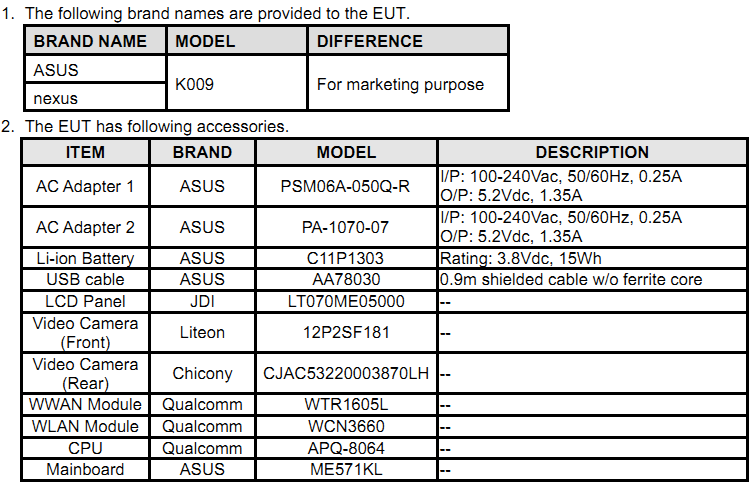 We are getting a new Samsung phone with a removable battery, as the Samsung Galaxy A01 Core has received Bluetooth certification