Read our full review of the Google Nexus 4 by LG where we cover performance, battery life, photo quality, and more
Published 27 November 2012, 12:48 EST

We were more excited to get our hands on the Nexus 4 than we’d been with any other previous Nexus device. We were looking forward to seeing how fast Android could be with the new Qualcomm S4 Pro quad-core CPU tied to a stock experience of Android; we were happy to hear that the gorgeous screen from the Optimus G would be used; and we were shocked by the price tag. It appeared as if Google had outdone not only itself, but every other Android manufacturer that makes competing devices. Were our high expectations met? Read on for our full review!

The Nexus 4’s spec sheet is nearly identical to the Optimus G’s, and that’s not a bad thing. It’s powered by the benchmark-busting Qualcomm Snapdragon S4 Pro quad-core SoC, clocking-in at 1.5GHz with 2GB of RAM. For storage options you get 8 or 16GB flash with no expandable storage options. For cellular data, there’s pentaband UMTS (850, 900, 1700, 1900, 2100 MHz) with HSPA+ support, ans hidden support of LTE band 4 for Canada (and T-Mobile’s LTE in the future) if you flip-on LTE through the service menu. The LCD display is 4.7″ and has a 1280×768 resolution, providing a pixel density of 320PPI. Powering the device is a non-removeable 2100mAh battery which can be charged wirelessly with a Qi-capable charging mat. 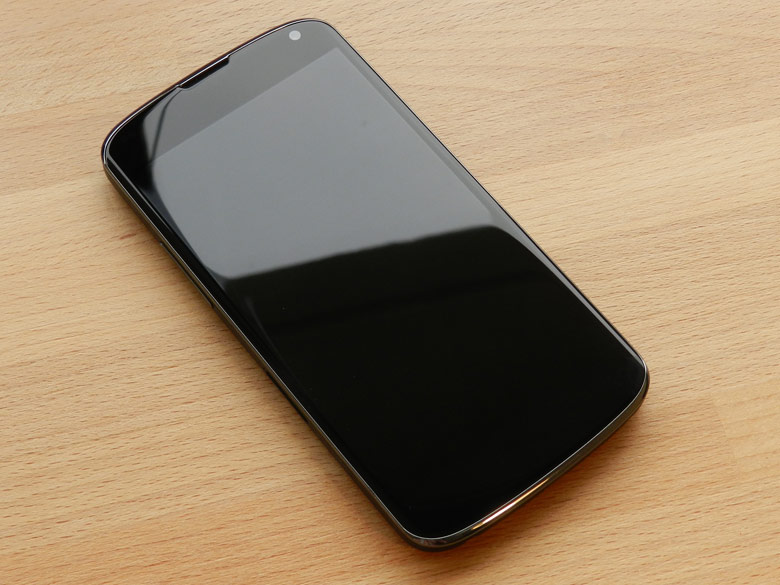 The Nexus 4 looks a lot like the Galaxy Nexus from the front thanks to buttonless design. 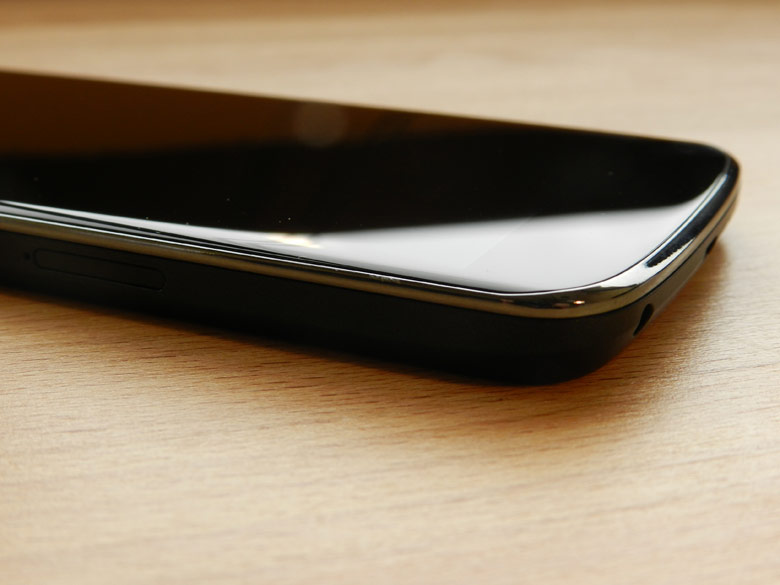 The front of the device is covered by an extremely smooth and reflective piece of Gorilla Glass 2. It’s also tapered around the edges. 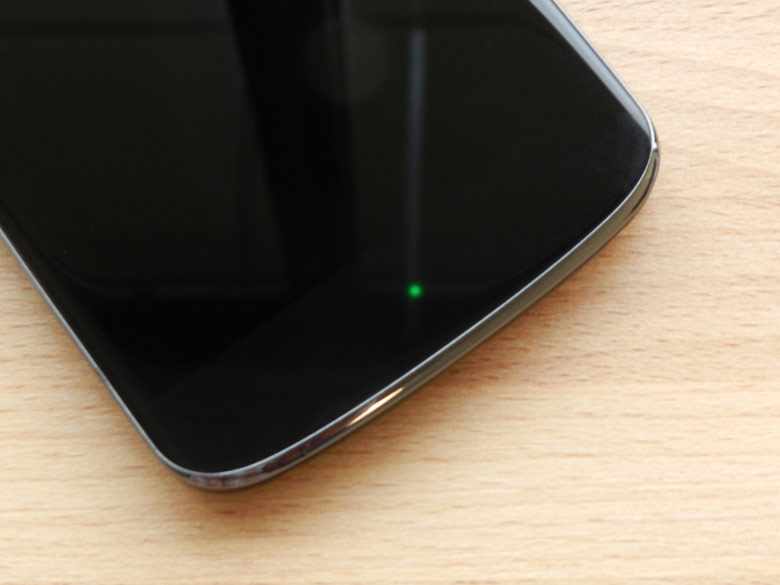 There’s a tiny notification light beneath the screen, which you can customize with a variety of colors with a third party app like LightFlow. 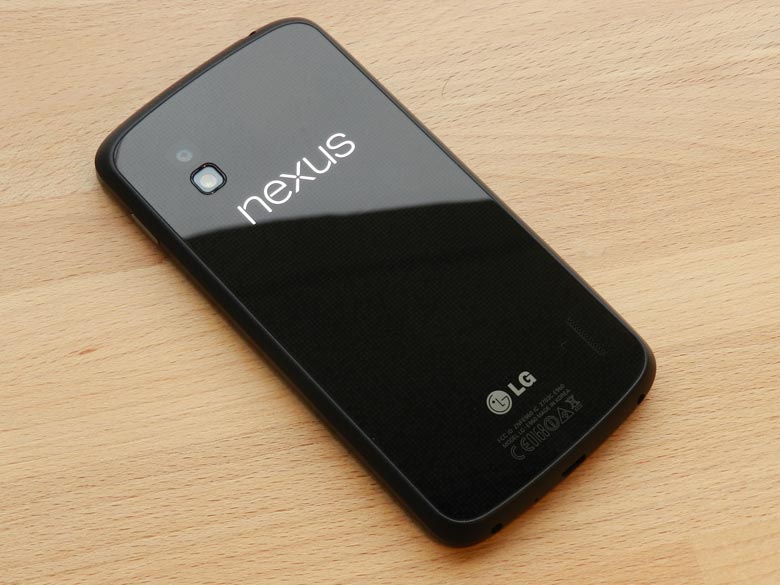 The back of the Nexus 4 is covered with a second piece of glass. While this is a nice-looking design element, it makes the device rather fragile if you drop it. Plus, this back piece of glass is as slippery as the one on the front, so it easily slides out of pockets and off of tables. Seriously. 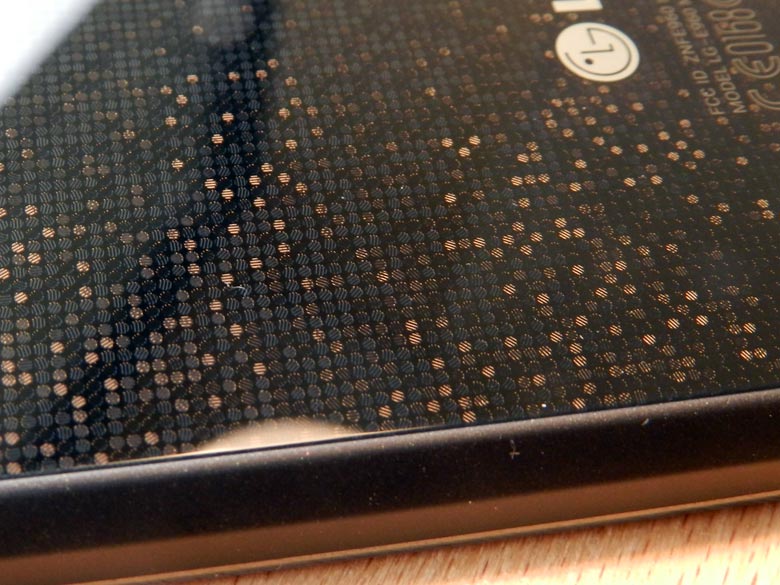 The pattern on the back is pretty psychedelic. It’s compromised of thousands of metallic circles, place under the glass, that are positioned differently from one another. This creates a fantastic shimmering effect when you tilt it in the light. 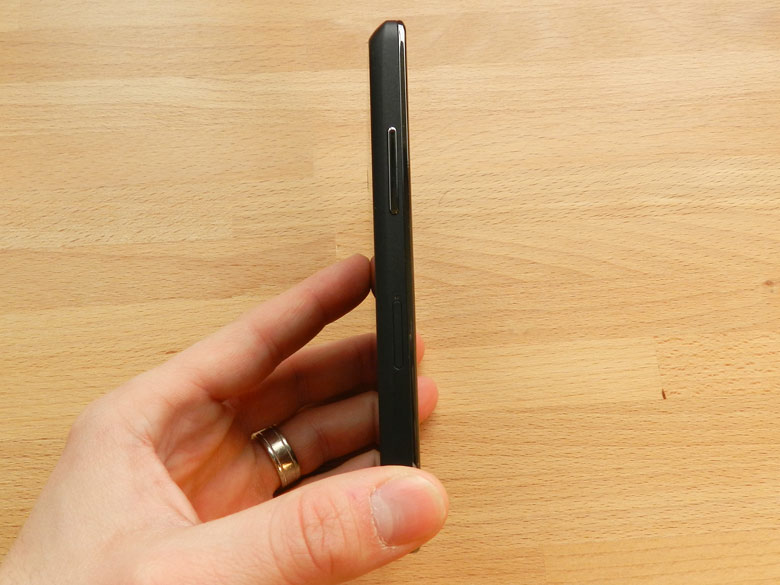 Between the two pieces of glass there is a piece of soft-touch plastic that runs around the 9.1mm edge of the Nexus 4. While this makes the device feel somewhat secure in hand, it also makes the device feel cheap because of the contrast with the glass. Here on the left side we have a volume rocker. 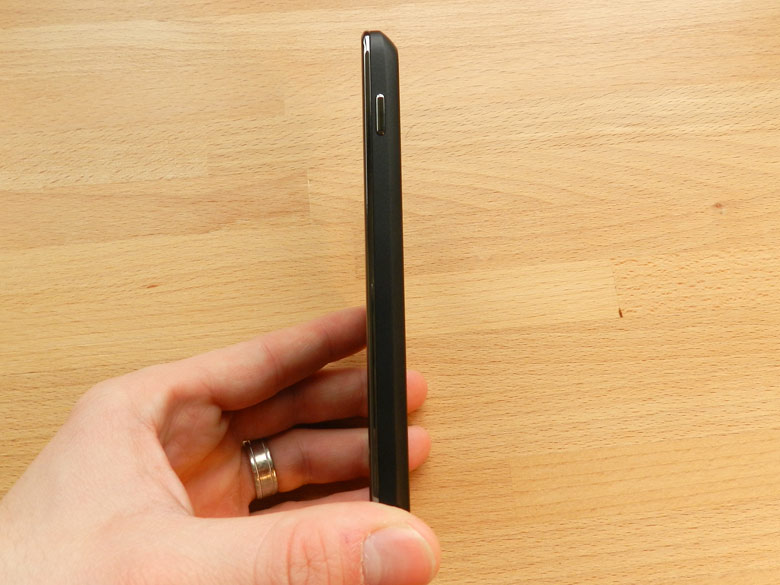 On the right side is the power button. 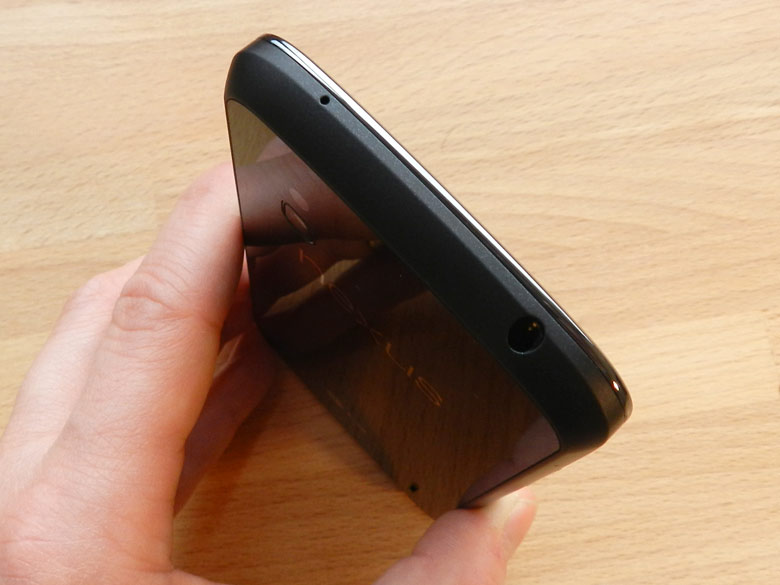 On the top there’s a 3.5mm headphone jack and a secondary microphone for noise cancellation. 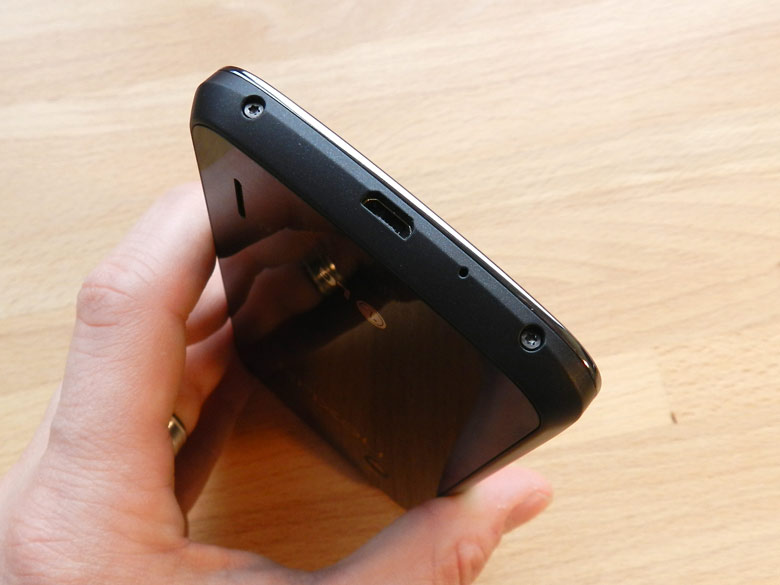 On the bottom we have two screws and a microUSB port. 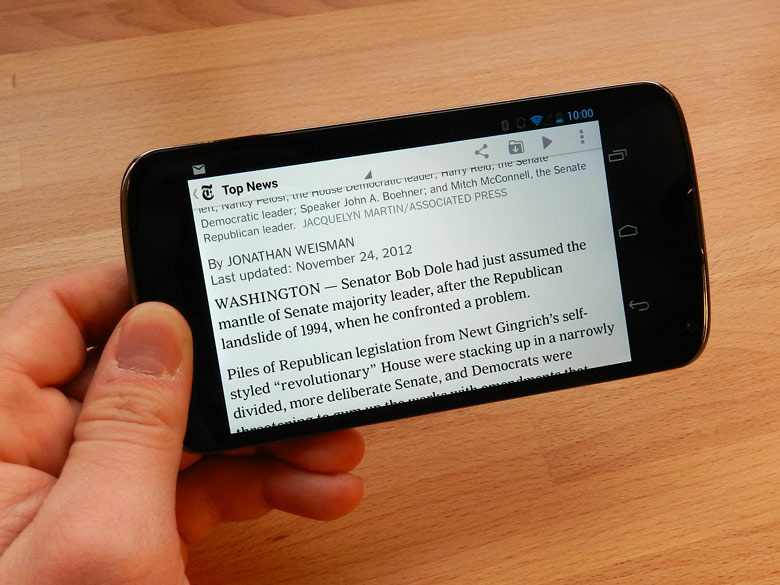 The Nexus 4 has a pretty wide bezel below the screen that makes it possible to hold the device in this interesting way. 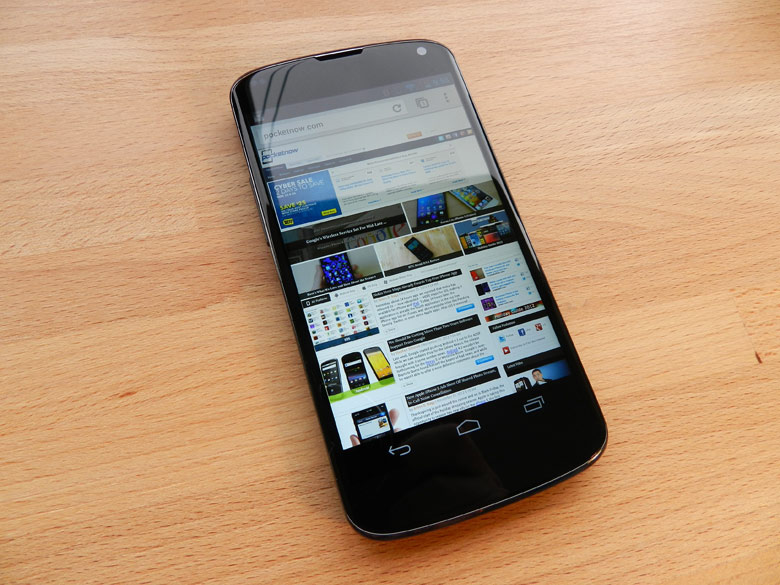 The 1280×768 4.7″ display is high resolution enough to allow text to be readable even from zoomed-out views. Nice. 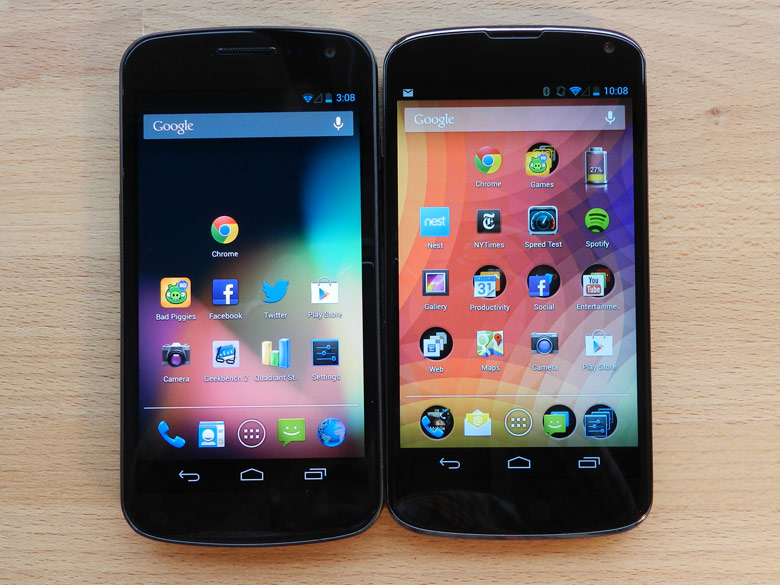 While the Galaxy Nexus and Nexus 4 look similar from the front, they’re actually very different. Check out our video comparison below. 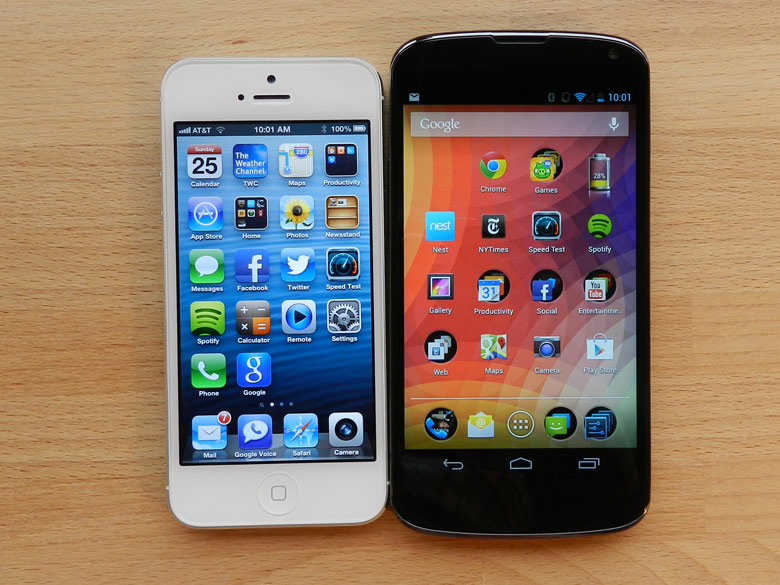 The iPhone 5 and Nexus 4 are both technically flagship devices for iOS and Android, respectively. How do they compare? 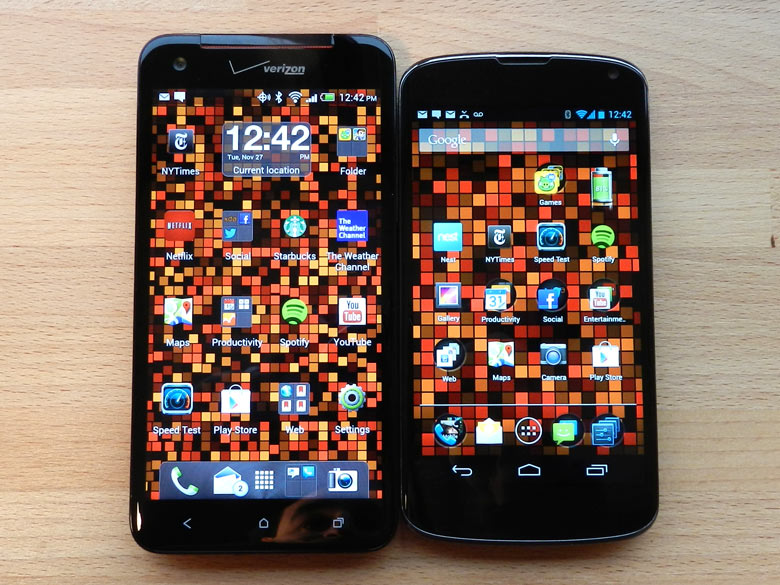 The Droid DNA is the first phone with a 1080p display. How does it compare to the Nexus 4? 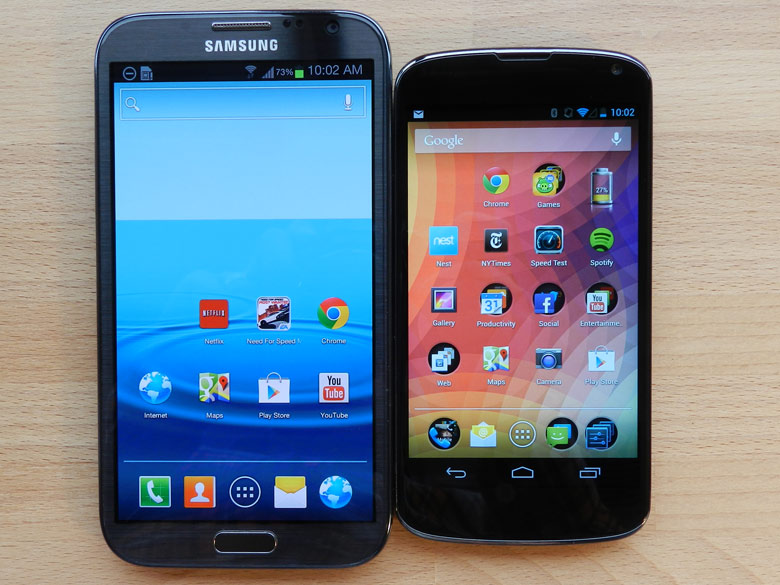 The Galaxy Note II dwarfs the Nexus 4 because of its massive 5.5″ display. 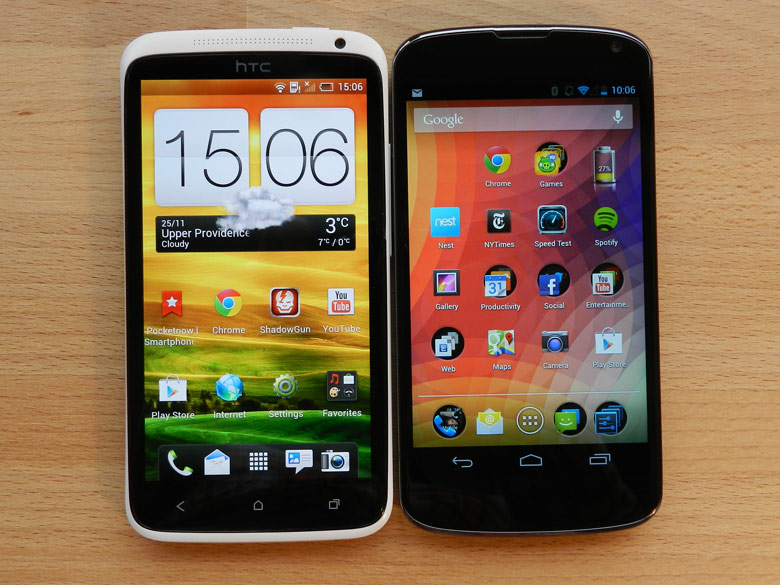 The display on the One X is still one of the best, but the Nexus 4’s screen comes close in terms of color saturation, contrast, and clarity. 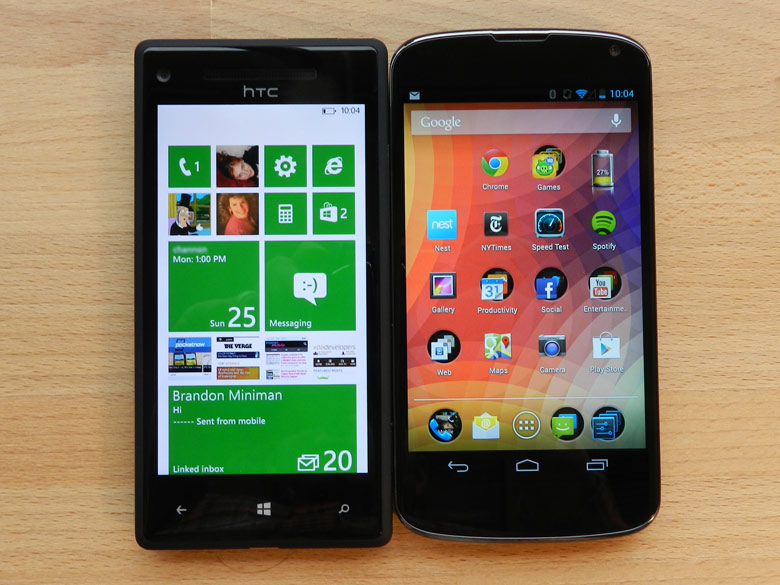 And for good measure, here’s the Windows Phone 8x by HTC next to the Nexus 4. 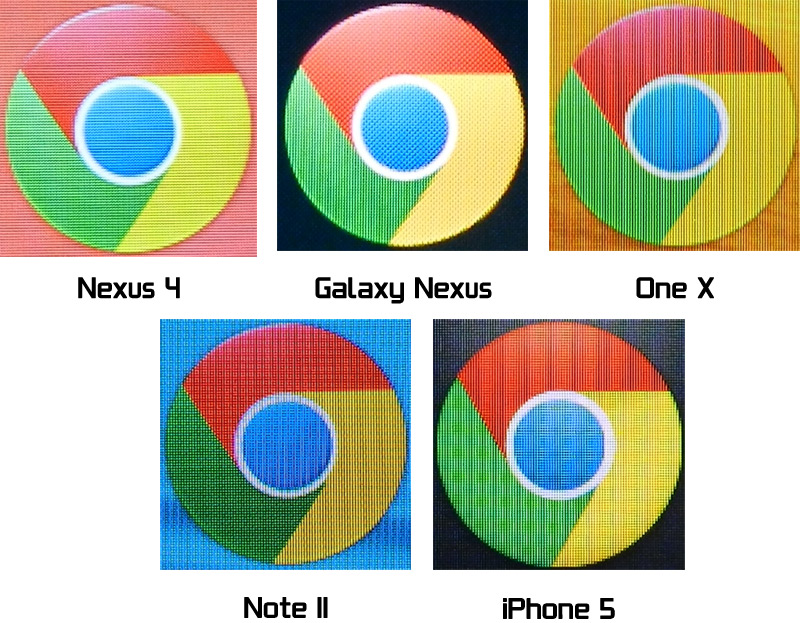 For the pixel-obsessed, here’s a look at how the Nexus 4’s display compares with some other devices you might know. As you can see, the Nexus 4’s sample looks much smoother than the Pentile display of the Galaxy Nexus.

Google “fixed” Android in version 4.1 Jelly Bean with Project Butter by making the entire interface run with a smoother refresh rate. Running Jelly Bean on nearly any Android phone will dramatically improve its perceived speed and fluidity. So with Android 4.2, Google just added a handful of features, building upon the good work they did in Android 4.1. Here’s a survey of the most interesting features of Android 4.2: 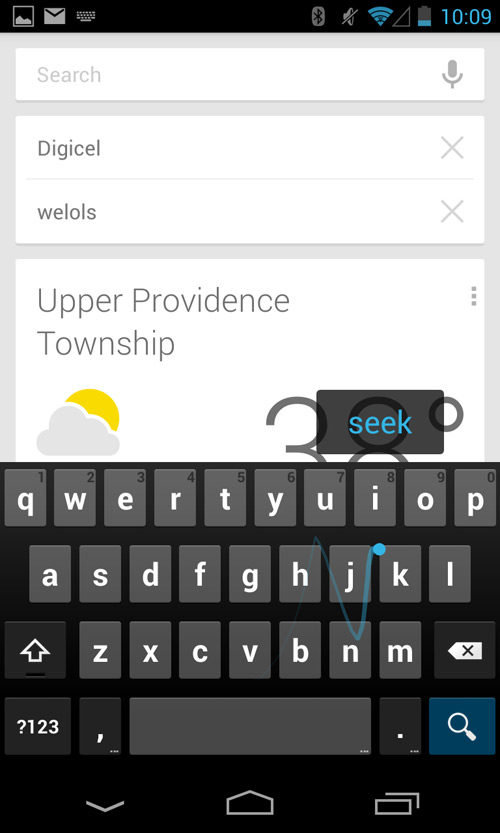 Gesture-typing: Ever use Swype? Gesture typing is just like Swype, just perhaps a bit better. Gesture type is enabled by default and works just like Swype: you trace over letters to make words, and unlike Swype, you see the word hover above the keyboard in real time to help you determine if Android is properly guessing your intended input. Overall, gesture type is a huge win and helps big with one-handed usability. 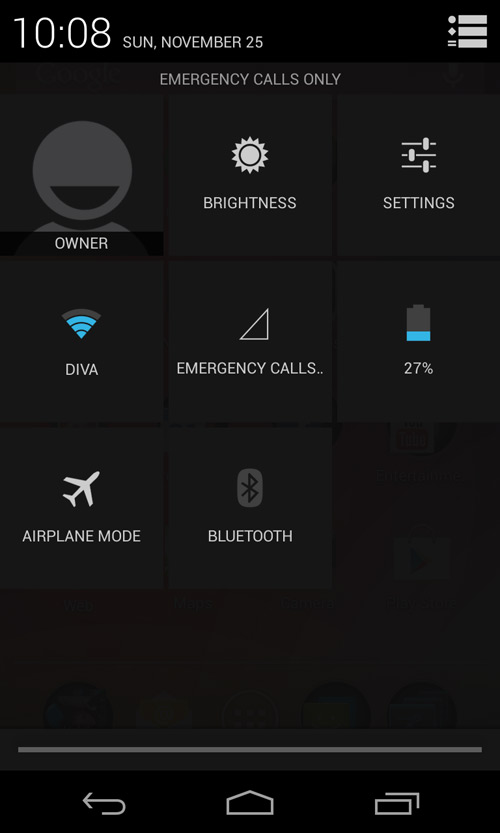 Notification tray changes: Android 4.1 introduced an improved notification system that lets you take action on apps (think: reply to SMS) without having to leave your notification shade. To expand a notification, Android 4.1 required a two-finger gesture. In Android 4.2, that has been replaced by a one-finger gesture. Also, there’s now a quick-setting portion of the notification shade, something that we’ve seen in third party software for years. Note that the quick-settings aren’t quick-toggles (like you get on Samsung devices so that with one tap, WiFi turns on or off), but rather they dump you into a specific part of the settings.

PhotoSphere: This stitches together about a dozen photos to make a “sphere”, which is more interesting than panorama mode, which only lets you do a horizontal shot. If you view the resulting sphere on a non-Android 4.2 device, you’ll get an ugly mosaic of photos. But view it on an Android 4.2 device and you’ll get a sphere button that will put you into a mode that lets you look at a scene in every direction  If this sounds a lot like Microsoft Photosynth, it is. In fact Photosynth might be more interesting because it’s multi-platform.

Other stuff: Android 4.2 has some other neat tricks like widgets on the lockscreen (which isn’t new for Android, as WidgetLocker users will tell you), Daydream, which is like an interactive screensaver for your Android, and in the case of tablets, multiple-user support.

The camera on the Galaxy Nexus was notoriously weak. It was a 5MP shooter that didn’t perform well in low light conditions, or, really, any conditions at all. Is the Nexus 4 better?

Video recorded in 1080p on the Nexus 4 looked pretty good in terms of clarity. However, color saturation was pretty weak. 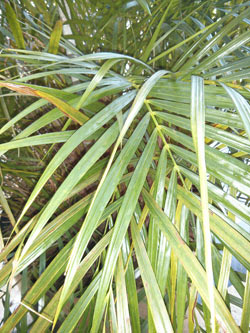 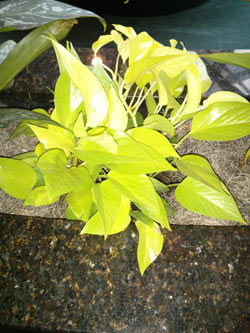 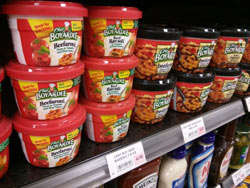 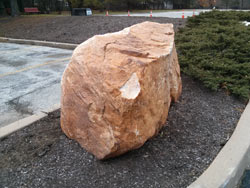 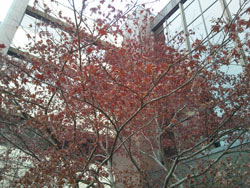 From left to right above we have two indoor shots with flash, and indoor shot with no flash, and two outdoor shots. Click on any of the shots for the original. In non-ideal lightning conditions, the Nexus 4 had trouble with color saturation.

Here is a panorama shot taken in medium light conditions. The exposure was uneven, though.

In day-to-day performance, the Nexus 4 is one of the fastest Android phones ever, but not by much. Apps launch a half second to a full second faster than other high-end Android phones like the Galaxy S III. Where the Nexus 4 doesn’t perform very well is in the web browser, where the default Chrome browser is just not as fast as the default Android browser.

Here’s a look at how the Nexus 4 did in the benchmarks. In parentheses is the Galaxy Nexus for reference:

We were impressed with the battery life on the Nexus 4, which is a refreshing change from the Galaxy Nexus. With heavy use, you should make it through a long day. With moderate use, you’ll get into the second day before needing a charge. It’s likely that the lack of LTE really helps the Nexus 4 here.

We tested the Nexus 4 on AT&T and T-Mobile in the Philadelphia area over HSPA+. Our speeds were pretty typical, with average down speeds of 4-5Mbps and 2Mbps up, with bursts of up to 10Mbps down and 4Mbps up. Yes, the Nexus 4 can do LTE on band 4, which only applies if you live somewhere where that kind of service is offered, like in Canada.

The Nexus 4 can be purchased through the Google Play store in your choice of 8 or 16GB configurations for either $299 or $349. In both cases, the device is unlocked and will work with a variety of GSM carriers around the world, including AT&T (where you’ll get HSPA+) and T-Mobile (again, where you’ll get HSPA+, and, if you’re lucky, maybe LTE over band 4 someday, assuming Google doesn’t close the hack that lets you access LTE, and T-Mobile actually starts offering the service).

We were expecting the Nexus 4 to be the best Android phone we’ve ever tested, as we’ve come to expect with every new Nexus phone since the Nexus One. While it indeed is a fantastic device with excellent battery life, great day-to-day performance, and a wonderful screen, a big handful of niggling issues keeps us from declaring the Nexus 4 to be the best Android phone out there. We’re having trouble getting past the sometimes-laggy performance in Chrome, the frustrating low screen sensitivity, the lack of LTE, and the questionable build quality.

With confidence we can say that if you get the Nexus 4, you’ll be happy, especially if you’re a power user that wants something fast that will have great support from the development communities. But if you’re willing to consider other options, we still really like the Samsung Galaxy S III, the iPhone 5, and the Nokia Lumia 920, all of which have fewer compromises. 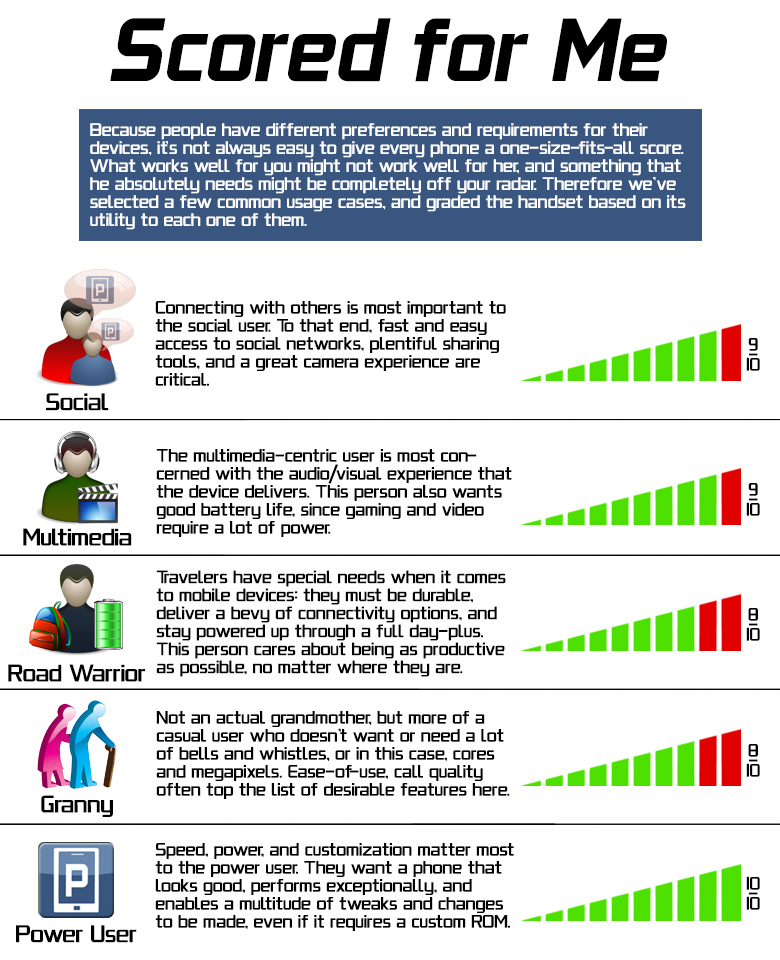 I can't stress this enough, but you should really get a Galaxy S21 Plus screen…

Samsung is planning to offer its foldable display panels to other companies.

Up until now, browsing Stories from your desktop hasn't been ideal.