Read our full review of the Nexus 10, the latest tablet from Google.

Others began making Android-powered tablets before Google got into the game. When they finally did, Google partnered with Motorola to bring us the Xoom — a 10-inch tablet running Android 3.x Honeycomb. Google has learned a lot since the days of Honeycomb and the Android operating system has matured significantly. Google has also begun working directly with manufacturers to spec and build a true “Google” product. Google launched the Nexus 7 to challenge the price-point held by ebooks and lower-end tablets, and showed us a tablet of sufficient quality could be had at an affordable price. Now they aim to do the same with the Nexus 10. How does it stack up against other tablets? Read our full review to find out!

The screen on the Nexus 10 is what sets it apart from its competition. At 10.055-inches and with a WQXGA resolution of 2560 x 1600 pixels, the screen on Google’s latest flagship tablet has a pixel density of 300 ppi, is powered by an ARM Mali-T604 GPU, and features a true RGB Real Stripe PLS display to render colors that are crisp and accurate – all protected behind a sheet of Gorilla Glass 2.

Want to pipe what’s on your screen out to a big screen TV? No problem; not only does Android 4.2 support Remote Display, but the Nexus 10 also comes equipped with a micro-HDMI port for direct connections to your big screen.

Flanking the display are two enormous, front-firing speaker grilles that are as tall as the screen. The speakers, however, sit only at the top of each grille; the bottoms are simply aesthetic. In our tests, both music and movies sounded amazing and there was no need for cupping our hand around the back in attempt to increase the volume by directing the sound forward, like we’ve had to do with other tablets. Front-firing speakers are definitely the way to go.

Although the Nexus 10 comes with 2GB RAM, the CPU has been something of concern. The processor is a Samsung Exynos 5 ARM Cortex-A15 running at 1.7GHz, but it’s only dual core — unlike the quad-core CPUs found in the Nexus 7 and higher-end Android-powered smartphones. Benchmarks tell one story, but actual use tells another. We’ll talk more about those later in the review.

With such a large display and high clock speed on the processor you’d think you’d have to keep the tablet somewhat close to the charger. That’s simply not the case!

Currently there are no versions of the Nexus 10 that support wireless data plans from carriers, so you’ll have to make due with the Wi-Fi 802.11 a/b/g/n (MIMO+HT40) that’s built-in. Bluetooth is also included, but only up to the 3.0 specification. That’s more than many devices (which seem to stop at version 2.1), but we were hoping support that Bluetooth 4.0 would be included. As with most modern Androids, the Nexus 10 includes NFC and Android Beam to quickly and easily share content over Wi-Fi and/or Bluetooth.

The Nexus 10 is unusually shaped. It’s not the “rounded rectangle” that Apple apparently has a strangle-hold on. Instead, both ends are subtly rounded, with large radii at the corners. Some have said the Nexus 10 looks somehow “other worldly” with its “elongated saucer” shape. Whether this was intended to be a distinguishing factor or a lawsuit-avoidance technique doesn’t really matter. At first sight you’ll either love or hate the shell of the Nexus 10. Whichever way you lean, after a few days of using it, it will both look and feel natural in your hand.

Although it’s a 10-inch tablet, the Nexus 10 is very thin. That doesn’t mean it’s flimsy — in our experience the tablet felt study and very well constructed.

A trademark feature of many Nexus devices are the golden pogo-pins, in this case for a dock that hasn’t been announced — yet.

The back of the Nexus 10 is extremely “grippy” which feels absolutely wonderful. You won’t have any problem holding on to your tablet or worrying about it sliding off the desk.

The power button is right where you’d expect it to be, as are the volume buttons. Interestingly, the right volume button is “louder” whereas the left button is “quieter”. That makes sense and corresponds to the on-screen volume indicator when you’re holding the tablet in landscape, but when you hold the Nexus 10 in portrait orientation the buttons are upside down.

The new lineup of Nexi all got the “new flavor of Jelly Bean” treatment. We covered what’s new in Android 4.2 in an earlier article, so we’ll just talk about the highlights here.

The camera app got a makeover and is a lot faster, so it’s less likely that you’ll miss those precious moments. You’ also get the new Photo Sphere feature which lets you take 360-degree, immersive panoramic photos, but you’ll look ridiculous taking them using a 10-inch tablet. The keyboard was improved to include “gesture swiping”, but it’s not as convenient or as useful on a large-screened tablet as it is on a small-screened smartphone. We wish Google would include a split keyboard layout similar to what Apple does, but perhaps they’re saving that for an upcoming version of Android.

With the new multi-user support in Android 4.2 your entire family will be able to use your Nexus 10 without messing up each other’s save-games and settings. Finally, what our tablets should have had all along! If only there was a microSD card slot so you wouldn’t run out of space so quickly with all those user settings and apps taking up space.

The main camera on the Nexus 10 features a 5 megapixel sensor with single LED flash, and is capable of full 1080p HD recording at 30 fps. The front-facing camera is 1.9 megapixels, which should be just fine for video chat or awkward self-portraits.

We don’t often talk about the camera on a tablet, and we still can’t fathom why anyone would want to take pictures using a tablet. Just in case that’s the only camera you have with you, how does the shooter on the Nexus 10 fare?

View Photo Sphere on Google+
The 5-megapixel shooter on the Nexus 10 takes decent pictures and 1080p HD video at 30 frames per second, though they’re not stellar.

The closest competitors to the Nexus 10 are the Motorola Xoom and Nexus 7, though there are several other 10-inch tablets that could be used as a baseline.

Powering the Nexus 10 is a 1.7 GHz dual-core Exynos 5 processor, compared to a 1.2GHz quad-core Tegra 3 inside the Nexus 7. These two tablets are proof that more cores don’t always equate to faster performance — though we are comparing Androids to oranges due to the different speeds and processor architectures. (We couldn’t say “Apples” here, could we?)

How does the Nexus 10 perform in the benchmarks? We ran through the usual line-up, and compared it to the Nexus 7 (in parenthesis), both running stock versions of Android 4.2.

Looking at the benchmarks you might be tempted to pass on the Nexus 10. If you did, you’d regret it. In some tests the Nexus 10 beats out the Nexus 7, in others it lags behind by a significant margin. In practice, the Nexus 10 runs circles around the Nexus 7 — both in daily activities and in high-end gaming. This underscores what many Pocketnow readers have been saying about benchmarks for years.

To sum it up: the Nexus 10 is very fast, despite what some benchmarks may say.

Tucked inside the Nexus 10 is a 9000 mAh lithium polymer battery that is supposed to provide 20.8 days of standby time. In our tests it lasted over 4 days with moderate to heavy use. Gaming and movie watching will drain the battery faster, but recharge times are remarkably quick, so you won’t have to go without your tablet for very long when it’s tethered to the charger.

You can buy a Nexus 10 for US$399 for the 16GB model or US$499 for the 32GB version from the Play Store. Both versions feature Wi-Fi connectivity. There are no “carrier” versions at the moment.

The Nexus 10 is in every respect a Nexus device with the pure Android experience as Google intended it. Despite having only two CPU cores the Nexus 10 is snappy, didn’t hesitate to do anything during our entire review, and feels all-around buttery-smooth. With its large, high resolution display and powerful front-firing speakers, the Nexus 10 is a media powerhouse and worthy of the Nexus name.

If you think you’ll be using your Nexus 10 for gaming, watching videos, or listening to your music collection, you will probably want to fork over the extra money to get more on-board storage — you can’t add anything more since Google doesn’t seem to like microSD card slots anymore. Sure, we like Google’s idea of everything in the cloud just fine, but with today’s metered data connections and the fact that wireless coverage (especially Wi-Fi) isn’t everywhere, we’d like to have some of our stuff with us, and 16GB just isn’t enough — especially if you take advantage of Android 4.2’s multiple-user feature.

All in all, the Nexus 10 is a well-built tablet that performs very well in everyday use. It’s a Nexus, so you can rest assured that you’ll get timely updates to new versions of the Android OS (at least for a few years). If you’re in the market for a 10-inch tablet, this is the one for you! 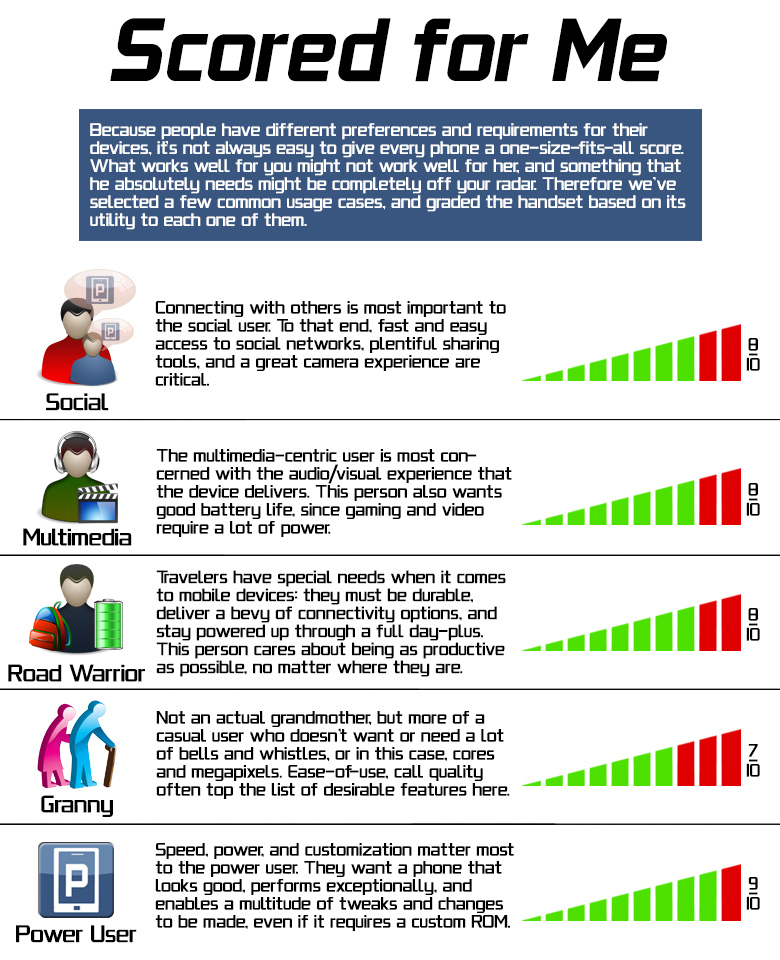