Find out how Nextbit’s Robin aims to shake up the smartphone industry.
Published 01 September 2015, 10:00 EDT

On the company’s website, we learn that “Nextbit is a small band of rebels who want to free people from the limits of today’s mobile technology.” It’s a new company formed to try to attack the smartphone market from a different angle since the market seems kind of boring these days. Everyone just keeps releasing phones and user experiences that copy each other even if what everyone else is doing makes no sense at all. All smartphones out there are currently just a rectangular touch screen with a grid of app icons that launch something when you tap them. Sometimes the screen size changes, sometimes you get a leather battery cover, sometimes it’s a different color. We’re a far cry from the huge diversity of smartphone form factors that we enjoyed only seven years ago.

Anyway, Tom Moss, Mike Chan, and Scott Croyle set out to do something different with Nextbit.  Tom Moss was head of business development for Android at Google until 2010 when he found a new company that focused on device management for Android. Mike Chan also worked at 3LM with Tom, after leaving his job as software engineer for Android from version 1.0-3.0. Scott Croyle is Nextbit’s Chief Product Officer and he has a strong history in smartphones as well. Previously he was a principal at One + Co; a design firm acquired by HTC in 2008 and subsequently he was SVP of design and user experience at HTC up through the HTC One M8. He helped design some of the coolest looking smartphones such as the Touch Diamond, HTC Incredible, Evo, etc.

Today Nextbit is announcing Robin.  Robin is a custom flavor of Android that has a special connection to Nextbit’s cloud service. If your internal storage gets around 90 percent full, it will offload certain apps and photos that you haven’t accessed for a long time automatically to free up space. Its cloud storage is system-wide recognized as the file system, too. So all apps that can access files on the device can also access the cloud storage. You can open Gmail and use the attach button to select a photo that isn’t even on your phone and it will let you attach that image to an email (after it downloads the image from Nextbit’s cloud service). 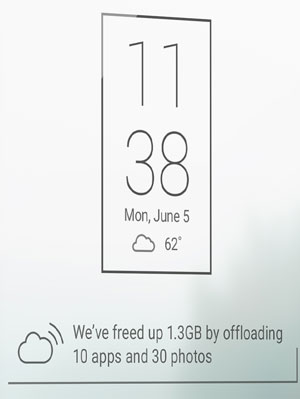 Robin is designed to back up your whole device to the Nextbit cloud whenever the phone is charging and connected to a WiFi network. That way it can delete apps or photos without losing anything.  For example, if your phone is practically full and you want to record a video or take some more photos, instead of getting a storage space warning, Robin will automatically free up space while you’re recording that new video.  When this happens, you’ll probably notice some of your app icons have changed to a greyed-out color.  That means the app is no longer installed locally on the device. It was removed because you need more local space and you don’t use it very often.  However, if you want to load it up again along, all you have to do is tap it.  Robin will go out to the Nextbit cloud and restore that app to its previously functional state (including your saved log-in info and user data.) 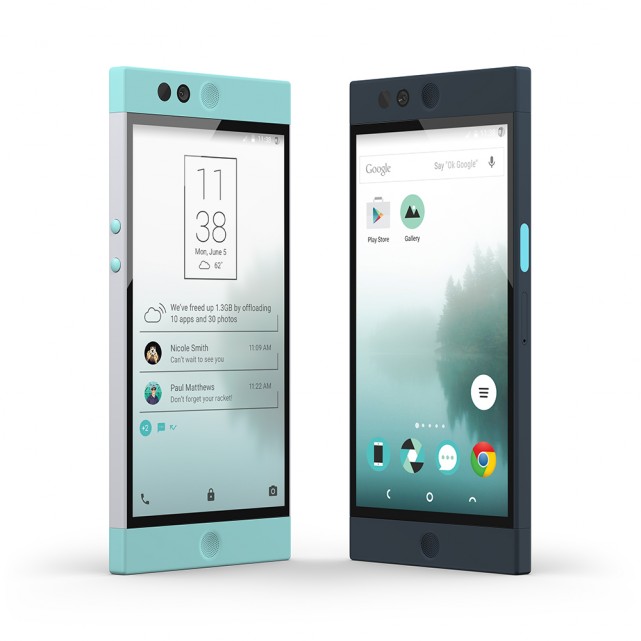 Now what about Robin’s phone hardware?  The Robin phones will initially be available in two colors: midnight and mint.  Of course “midnight” is just black, but the mint color is pretty refreshing.  The design feels like a more rectangular version of the HTC One.  The corners are very pointy!  Everything has very sharp right angles which are not at all ergonomically comfortable to hold. The flat edges do make for a good place to grip the phone though and the completely flat backing means it will be very stable on a table.  I’m not sure how well those pointy corners will hold up in the drop tests though. While the shape is all about rectangles, the accents are all about circles.  The camera housings, the flash, the speaker holes, and the volume buttons are all circle shaped.

It will have USB-C 3.0, dual front-facing speakers with dual amplifiers, Snapdragon 808 processor, 5.2″ 1080p IPS screen, a 13 megapixel phase detection autofocus camera with dual-tone LED flash and the power button on the right edge will have a fingerprint scanner built into it for easy and secure unlocking. Unfortunately there is no wireless charging and you can’t swap out the 2680 mAh battery for a fresh one. Nor is there any microSD card slot since the phone is designed to be infinitely expandable via cloud storage, but it includes 32GB of local storage and 100GB of cloud storage. Of course, it has Bluetooth, WiFi, NFC, and LTE. As for which LTE bands, it’s got class 4 bands 1/2/3/4/5/7/8/12/17/20/28.

Nextbit wants to embrace the customization capabilities that Android was once so well-known for so the Nextbit Robin will come with an unlocked bootloader so that you can load whatever ROM you want to and the Nextbit website will host Robin ROMs that you can use to restore the phone back to its original state. What’s more is that installing custom ROMs will not void your warranty. Hopefully you’ll want to keep the Robin OS though and Nextbit has designed it to be easy to update with Google’s latest version of Android as those updates are released.

Sept 1 will be the start of its Kickstarter campaign where you can preorder a phone for the special early-bird price of $299 (for the first 1000 people) which will come with 100GB of cloud storage. After that, any Kickstarter purchases will be $349. Regular price in Q1 2016 will be about $399 and the company’s still working out the details of how much cloud storage that will include (probably 70GB), but the full release is expected to be in January of 2016.

By the way, Nextbit is very interested in generating a two-way dialogue with its customers and the smartphone community in general, so be sure to head over to its Kickstarter campaign, Twitter or Facebook and tell them what you think.