Apple has just announced the New MacBook Air, a faster, smarter, sexier, and lighter version of its notebook. Check out all the details.

The day many have been waiting for has arrived. Apple’s second fall event is on its way. There were plenty of rumors and reports building up to this moment, as we knew to expect the new iPads and the new MacBooks.

Tim Cook kicked off the Mac segment of the event by sharing some numbers. Macs are apparently the number one in customer satisfaction, and that’s from the 100 million active install base.

So here’s the New MacBook Air, a completely redesigned, reengineered, and carefully refined upgrade over the predecessor. And, since the MacBook Air is “the most beloved notebook ever”, according to Tim Cook, it deserved Apple’s whole attention. 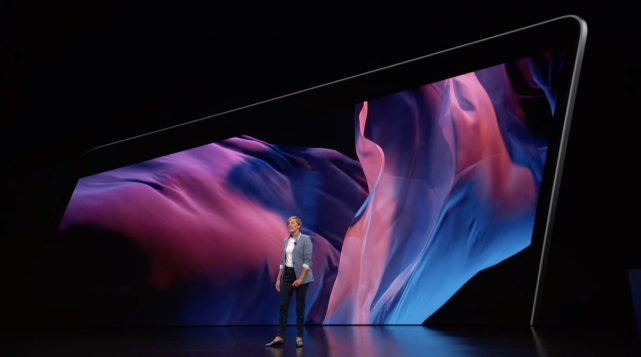 The New MacBook Air, by popular demand, gets a Retina Display that’s 13.3-inch in diagonal, and has a resolution of 4 million pixels, with 48% more color. Not only that, but Apple has redesigned the area around the display. Not only are the bezels now black (like on iMacs and MacBook Pros), but they are also 50 percent smaller. Even so, the FaceTime camera remains on the front, at the top of the screen.

In addition to the Retina Display, the New MacBook Air also gets Touch ID. The sensor is embedded in the keyboard and comes paired with Apple’s T2 security chip. This chip not only handles your fingerprints, but it is also an SSD controller with real-time encryption, an IO controller, and an always-on processor for Hey Siri!

The keyboard is the all new, redesigned, 3rd generation keyboard with Butterfly mechanism. It is backlit with individual LEDs behind every key, for even backlight. The trackpad is now the new Force Touch trackpad that’s 20% larger, and offers haptic feedback. 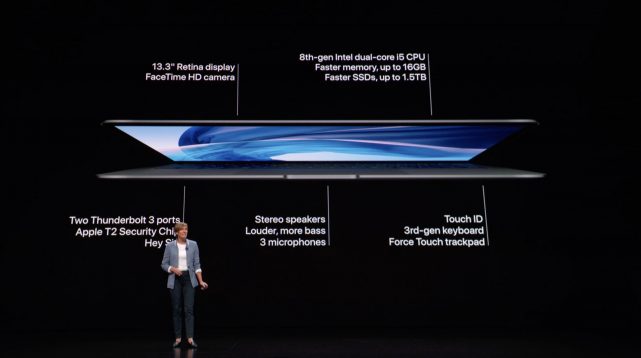 For those enjoying multimedia, the New MacBook Air packs speakers that are 25 percent louder and offer two times more base and oomph. The notebook also features a three-mic array for FaceTime calls and voice recognition.

Two Thunderbolt 3 ports will take care of all your connectivity I/O needs — be it expansion ports, external GPUs to replace the Intel integrated solution or what have you — and the battery continues to deliver an all-day battery life, according to Apple, with 12 hours of wireless web browsing and 13 hours of iTunes movie playback.

An 8th-generation dual-core Intel Core i5 processor is at the core of the New MacBook Air. It now supports up to 16GB of RAM that’s also the faster kind clocking at 2133MHz. Storage-wise, it supports up to 1.5TB SSD that is 60 percent faster than the predecessor.

Despite all of these changes, the New MacBook Air takes up 17% less space than the predecessor. It’s 15.6mm thin, which is 10% thinner than the model before, and weighs 2.75 pounds. It is made from 100% recycled tin and 35% recycled plastic, in addition to a custom Apple-designed alloy that employs 100% recycled aluminum. 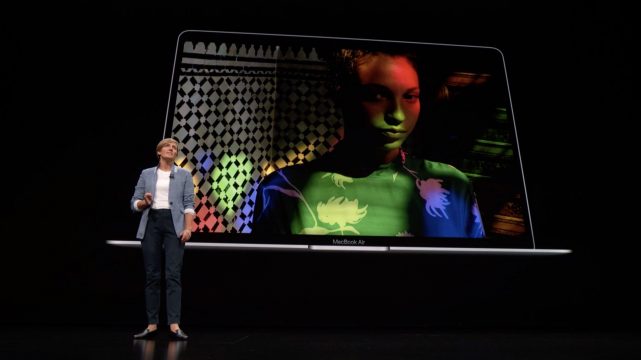 The base configuration of the New MacBook Air features the 1.6GHz Core i5 processor, paired with 8GB of RAM, and 128GB of storage. This base configuration starts at $1,199, which makes this model the cheapest, until you start adding more to the configuration. The top-end model, with 16GB of RAM and 1.5TB of storage, will cost $2,599. It can be ordered today, October 30, and will be available next week, November 7.

The previous MacBook Air model is still available at $999.