Apple’s got a new MacBook to share at today’s event, making even the MacBook Air look thick and heavy.
Published 09 March 2015, 13:38 EDT

Today at Apple’s event we’re already moving past streaming media and onto mobile hardware. While we’re not quite to the highly anticipated Apple Watch news just yet, Apple’s got some exciting developments for its laptop lineup, announcing the next generation MacBook.

The incredibly thin MacBook measures just 13.1mm thick, thinner than even the 11-inch MacBook Air, while sporting its own 2304 x 1440 12-inch display. It weighs a scant two pounds, making it Apple’s lightest notebook computer ever.

A new keyboard makes the keycaps larger while delivering a new, thinner switch mechanism, for a 40 percent reduction in thickness. Each key also gets an individual backlight. 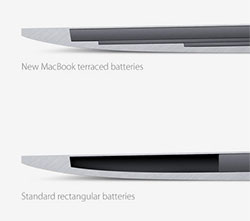 A new cooling system frees the laptop from a noisy fan: Apple’s first-such MacBook. Besides ditching the fan, Apple saves space with a new logic board that greatly reduces its footprint compared to previous generations. All that free space gives Apple more room for batteries, and it’s taking full advantage of that space with an optimized terrace-stacked design.

For connectivity, Apple’s embracing USB-C, allowing it to deliver power, provide video-out, and interface with accessories all through one standard connector interface.

Color options will include gold, silver, and gray. Pricing starts at $1300, with sales beginning April 10.