The new Mac mini has received the biggest upgrade ever

Great changes and upgrades have come with the presentation of the new Mac mini that’s already available for purchase for a really nice price.

Apple has really been working to make important upgrades on many of its hardcore computing line-up for this event. One of the biggest improvements comes to one of its smallest products with the new Mac mini.

It’s become just as beastly as a MacBook Pro with eight-generation Intel processors in four-core as well as six-core variants to give 60% faster graphics processing, which makes it 5 times faster than previous models. It starts with 8GB of RAM and can go all the way up to 64GB with smaller and more efficient SO-DIMMs. Flash storage is solidly solid-state and runs all the way up to 2TB storage. Even with a massive cooling unit, it’s quieter than previous generations.

The mini has plenty of connections it can make including an Ethernet port for up to 10Gbps connections, four Thunderbolt 3 ports, HDMI 2.0, a pair of full USB 3.0 ports and a 3.5mm headphone jack. It’s designed for mobile creative users who need a traveling workstation as well as server managers who daisy chain their units to the maximum. 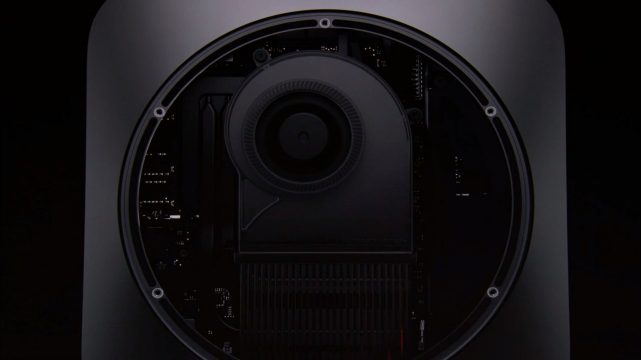 The base configuration features an Intel Core i3 with 8GB of RAM and 128GB of storage, running at $799. The minimum six-core buy will cost $1,099. If you want a new Mac mini, they’re available to order from today, and it will be delivered from next week on November 7th.