Android 4.4.2: Here’s what it brings to different Nexus devices

Android 4.4 KitKat was introduced when Google released the Nexus 5. Earlier this month we heard of an “incremental update” that was supposed to fix a few things specific to the Nexus 5 called Android 4.4.1. Now, even before the 4.4.1 OTA update reached any of my devices, Android 4.4.2 is being pushed to users. What’s with all the updates? What is new in Android 4.4.2 that wasn’t in 4.4.1 or 4.4?

One skill I bring to the Pocketnow team is my experience as a software developer. As such I’m intimately aware of the product lifecycle — and the fact that bugs are everywhere. Bug-fixes aren’t the only reasons for deploying updates and patches.

Software modifications can fall into several categories — and may even span categories. When something doesn’t function as the developer expected, it’s usually called a “bug”. “Bugs” are one obvious category that requires a change to the software. Bugs can range from simple inconveniences to critical failures — and everything in-between.

The next type are “enhancements”. These are things that didn’t make the initial cut, but were important enough to get attention going forward.  “Enhancements” typically build upon existing features. Similar to this are “improvements” which could be code that makes something easier or simpler to use, or it could be an optimization to the underlying code itself.

The last we’ll talk about here are “feature additions”. In this context a “feature addition” is the inclusion of some new functionality that was not present in the previous iteration of the software.

Now that we’ve got all that defined, we can talk about what Android 4.4.1 and 4.4.2 bring to our devices that wasn’t included in Android 4.4. Just remember that a change can belong in more than one of the categories mentioned above.

Fix for clearing the voicemail indicatorSoftware changes can be lumped into general Android updates, as well as device-specific updates. These are some of the more notable updates that every device running Android will get with the 4.4.2 update: 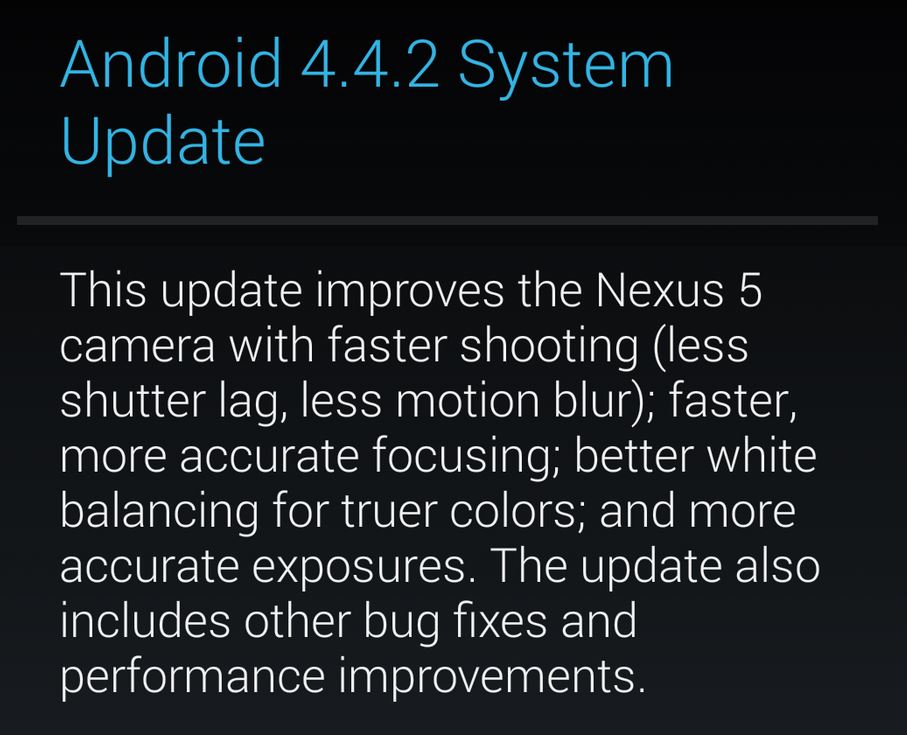 As far as we can tell, these are the same camera updates that the Android 4.4.1 update included, which go on to mention the ability to pinch-to-zoom while in HDR+ mode.

The updates for these devices are much more generic than the update for the Nexus 5. These updates say something like the following: “This software update will upgrade your Nexus … to 4.4.2 which improves performance and stability and fixes bugs.”

It’s likely there are some device-specific updates, but none that we were able to readily identify.

The update for the Nexus 5 is around 55MB in size, whereas updates for others in the Nexus family are around 40MB. That 15MB difference likely represents the camera changes specific to the Nexus 5.

Have you gotten the 4.4.2 update on your Android-powered device? Have you noticed any of the “improvements” that we mentioned above? How is your “new” Nexus 5 camera? Head down to the comments and tell us about your experience!

Are you more interested in custom ROMs than stock ROMS and want to see CyanogenMod 11 running on the Nexus 5? What about the differences between Jelly Bean and KitKat? Are Nexus devices really that much more desirable than flagships from other OEMs? Regardless of what you’re looking for, if it has to do with smartphones or tablets, Pocketnow has got you covered!

But I so dearly wish that the leaked render is the real deal!

You can watch the ASUS ROG Phone 3 launch here.

It will also roll out to the users in Indonesia, Pakistan, Bangladesh, Myanmar, and more countries.