HTC’s new Desires finally live up to the name

For most of us, the HTC Desire lineup hasn’t been all that desirable. Now, fresh out of MWC, two new HTC desire models are finally living up to their name.
Published 26 February 2014, 07:25 EST

HTC makes great devices, you’ll get no argument on that from me. Where opinions begin to vary is whether or not the HTC Desire series really lives up to their name: are they really all that desirable?

If you’d have asked me that just a week ago, I wouldn’t have hesitated: no, they’re not desirable. That said, I do respect the role that the HTC Desire family has played over the years. They’ve all been fairly decent devices for the average smartphone user. What’s more, they’ve generally been pretty affordable. Even still, they’re nothing that I would have recommended for any of my friends or family.

de·sire
dəˈzī(ə)r
noun
1. a strong feeling of wanting to have something or wishing for something to happen.

Now, however, we’ve had an opportunity to see a few new Desires from HTC, and to be frank, I’m shocked at how far they’ve come.

Let’s start off with the Desire 816. At first glance, you might easily mistake the Desire with the HTC One. The shape is roughly the same with similar radii on the corners, it has two front-firing speakers that deliver the BoomSound that the One has become famous for, and it sports the HTC logo. Upon closer inspection you’ll start to notice some differences. 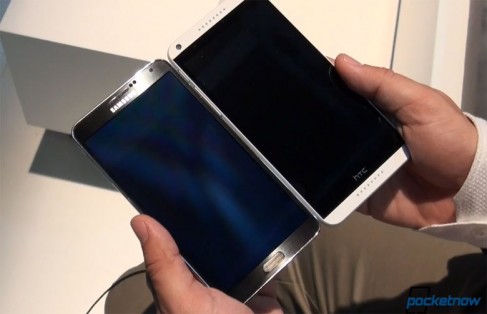 First off, the Desire is made of polycarbonate rather than the cool aluminum that the One family flaunts. Sure, its a difference, but it’s not a deal breaker. Next, the buttons are no longer capacitive at the bottom of the screen, they’re on-screen, just like Google’s Nexus devices. Some may balk at this, but it’s a cost-saving measure, and one I don’t disagree with. I, for one, like Android’s on-screen buttons. (We expect this year’s All New One to have on-screen buttons as well.)

Next we’ve got the guts. The display measures 5.5-inches at 720p. No, it’s not 1080P, but the Nexus 4 was 720P and I liked the resolution just fine. Powering the Desire 816 is a Snapdragon 400 running at 1.6GHz, which is very respectable. It’s not the high-end Snapdragon 800, but the 400 is still “snappy”. Backing up the CPU is 1.5GB of RAM and 8GB internal storage. Both are sufficient, but it also includes an sdcard slot capable of accepting a 128GB microSD card. The camera on the back is rated at 13-megapixels, and it even supports LTE.

No, it’s not a flagship. It’s not supposed to be. Instead, it’s a mid-range phone that’s got very respectable specifications packed into a very nice looking chassis.

The Desire 610 is essentially a smaller version of the 816.  It’s got a 4.7-inch qHD screen and the processor and RAM have been stepped down to 1.2GHz and 1GB respectively. It still has 8GB storage, can also accept a microSD card, and still manages to support LTE. The camera also gets bumped down to 8 megapixels, but that’s still not bad.

I’m not going put my Nexus 5 up for sale just so I can pick up one of the two new Desires from HTC. I’m a power user and these aren’t for me. My family, however, is a different story.

I have a wife and two teenaged children who carry smartphones with them. I can’t justify getting them all a Nexus 5. Up until now I would have passed on outfitting them with an HTC Desire. Now, however, I can see getting the kids the Desire 610 and equipping my wife with a Desire 816. Not only that, I want to get them these new phones when it comes time to replace what they’re currently carrying. That’s something impressive — especially coming from me.

What do you think of the new Desire lineup from HTC? How do they compare the the phone you’re carrying now? Would you consider upgrading to one of these? Have you previously owned an HTC Desire? If so, which one? How do the new models stack up against the one you had? Head down to the comments and let us know!