Is the new Google Glass hardware nearly ready to arrive? Some fresh FCC docs sure have us wondering as much.
Published 02 July 2015, 16:27 EDT

Google Glass managed to get plenty of people excited, and for good reason. Far more than smartwatches, the tech seemed practically right out of science fiction, yet here Google was not just developing it, but giving the public a chance to experience it for themselves. While the original Glass momentum may have seriously slowed down (publicly, at least) since its heyday, work on the project has continued, and we’ve heard that a new generation of Glass hardware is on the agenda for sometime later this year. Today we have what might be our first run-in with some real evidence of that device, as the FCC publishes the paperwork for some mysterious new Google hardware.

The documentation identifies this device as Google’s model GG1, and provides evidence for the presence of several radios, including Bluetooth LE and 802.11a/b/g/n/ac WiFi over the 2.4GHz and 5GHz bands. While the device type itself isn’t clearly established, there are a few clues which -when read in the right light- might point to this being the new Glass.

For one, there’s that model number, and it’s not hard to see how the GG could stand for Google Glass. Then there’s the FCC label itself, presented here not as a physical item, but an electronic “e-label” that’s displayed on-screen. The idea of an e-label makes a lot of sense for a product as compact as a new Glass would be, and the accompanying paperwork’s description of accessing the screen by scrolling left and right through a settings menu is easy enough to envision in terms of Glass’s UI. The embedded screenshot (below) happens to be a 640 x 360 image – exactly the same as the last Glass’s resolution.

That said, this could easily be something else altogether, but we may very well be looking at the start of the next generation of Google Glass. 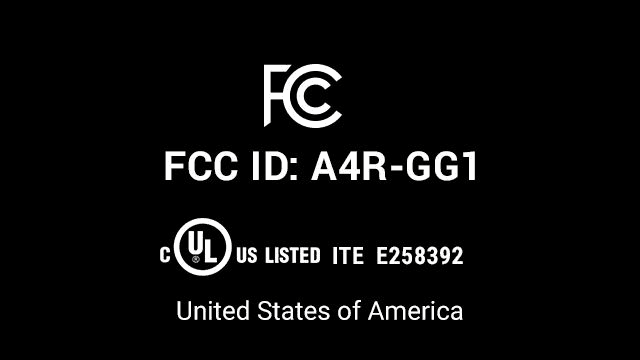