The Moto Z3 Play was just announced. Read on to see our quick initial hands-on and first impressions, as well as our hands-on gallery, specs, and more.
Published 06 June 2018, 09:30 EDT

The Moto Z series has been Motorola’s flagship Android smartphone series for a few years now and the “Play” model has always been the more-budget-friendly version in the Z series. Today Motorola is announcing the new Moto Z3 Play which is obviously the third generation of this phone. The original Moto Z Play was a little thicker than the other Z series devices, and it had a lower-quality screen, but much better battery life while still having full compatibility with all of the Moto Mod expansion packs available. Motorola has not yet announced any other third generation Z series devices, but we expect a few more-expensive Moto Z3’s to be launched later in the year. In the meantime, we’ll take a look at the Moto Z3 Play. 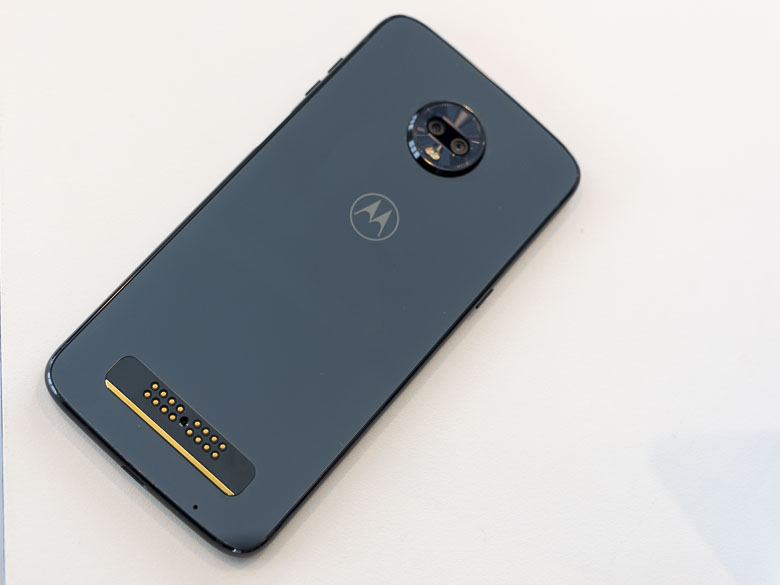 Of course the Moto Z3 Play is the same shape as the other Moto Z Family devices, especially on the back so that it maintains compatibility with all of the existing Moto Mod expansion packs. The old projector, Hasselblad True Zoom camera, stereo speakers, extended batteries, wireless charging covers, etc. all still work on the Moto Z3 Play. 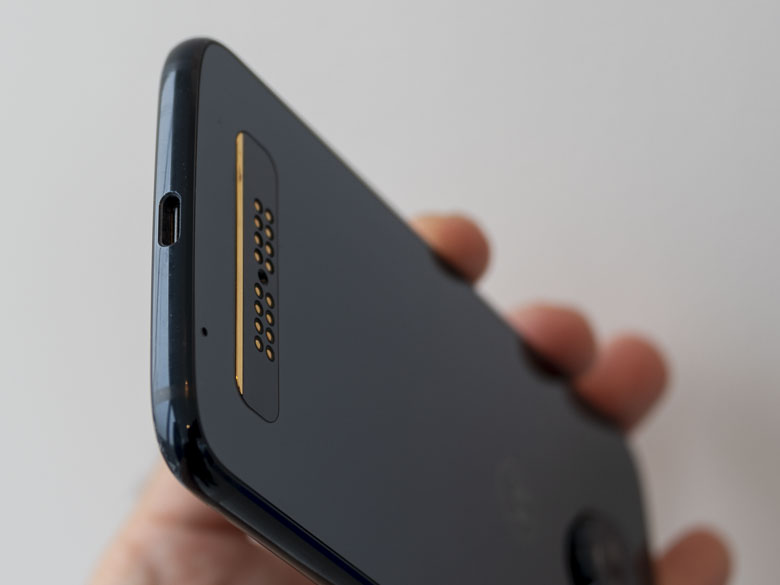 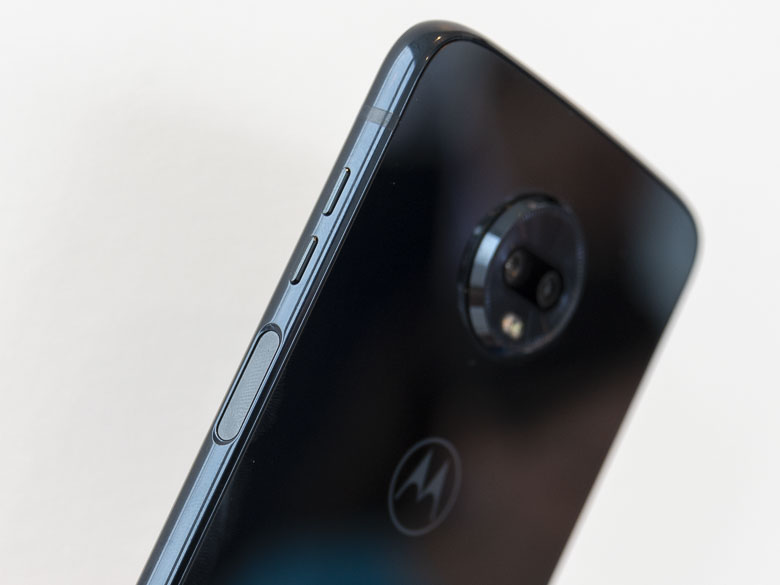 The fingerprint scanner has been moved from the front to the side edge in order to make more room for a larger screen on the front. This makes a much more ergonomic hand position for unlocking the device. If you hold it in your right hand, you can use your thumb to unlock it or if you hold it in your left hand, you can use your index finger. It’s a really great position for the scanner, and much nicer than the back or front options that other phones use. The fingerprint scanner only does wake/sleep/authenticate functions though, there are no pre-programmed or user-programmable gestures for it. 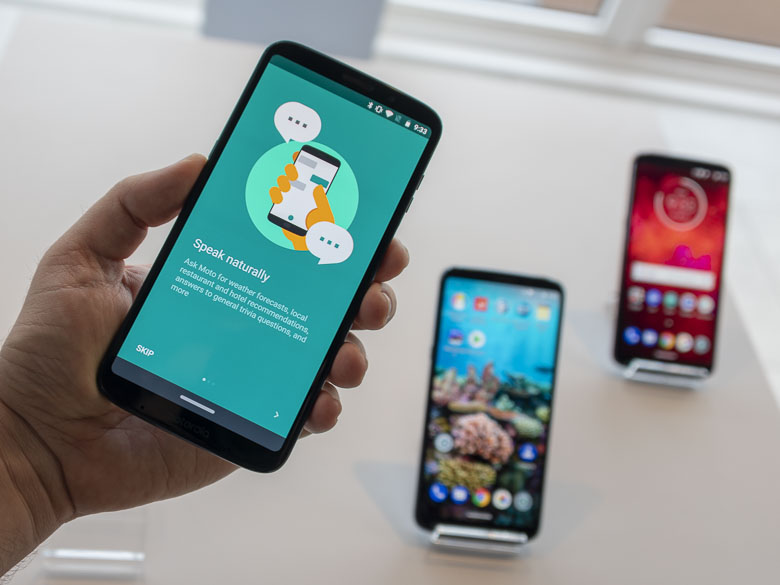 The Moto Z3 Play comes with Android 8.1 which will support 2 version updates in the future. It’s mostly a pure Android experience, but there are still some Motorola customizations. The awesome glance screen that shows minimal information without fully powering on the screen is still there, as are a slew of secret gestures for controlling certain things.  There’s also a new “OneNav” command bar option at the bottom. By default you’ll get the usual triangle, circle, square Android nav bar buttons, but if you want, you can change that to a thin simple line. Tapping the line goes to the home screen, swiping it left goes back, and swiping it right goes to the recent app task view.

There’s also a new Motorola speech interface that really isn’t finished, but it’s there if you want to try it. The intention is that this Motorola speech UI will be able to understand and carry out multiple commands in one sentence.  For example, “Call the nearest pizza place” should search for the nearest pizza place, get its phone number, and call it all at once. The current GUI is clearly not done very well though as there is no indication of how to activate listening mode, no obvious plain-English indication of when it is listening, and “what can I say” suggestions look like touch buttons. So there are still some design problems with that. 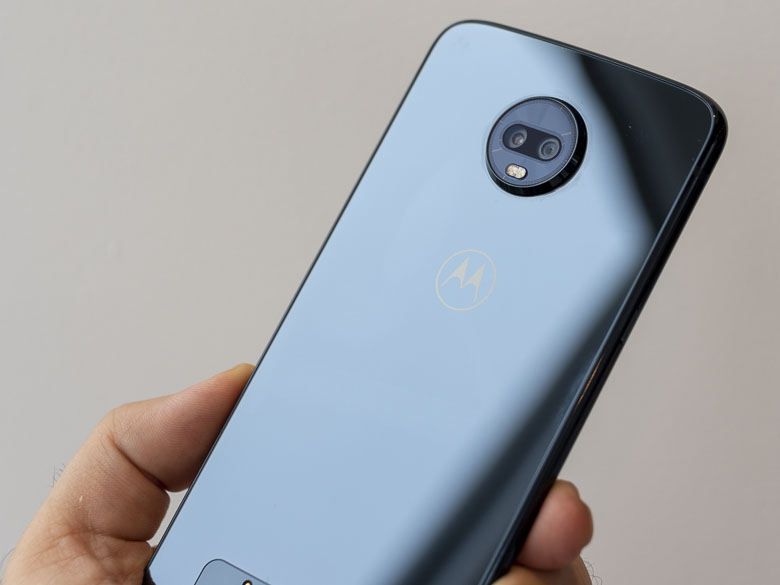 While older Moto Z Play models had only one camera on the back, the Z3 Play upgrades that to one 12 Mp sensor with a secondary 5Mp depth sensor. Of course this is to enable the fake-background-blur filter fad that everyone else is doing and nobody is doing well enough for it to look good.

Above is a 100% crop of a sample photo from the Moto Z3 Play’s camera and its fake background blur filter. Just as with all of the other cameras that do this, it looks really bad when you zoom in. The edges are very poorly selected and it just looks like a Photoshop fail done by someone who doesn’t know how to use the software correctly.

The camera does not support RAW output, but it does include some other neat features like a built in Google Lens, and cinemagraphs.

The built-in cinemagraph mode works almost exactly like the Nokia cinemagraph modes we saw many years ago. Basically it shoots a short video, then automatically selects an area to keep animated in a loop while other parts of the image remain still.  You can use your finger to paint over areas in order to hide or show other sections as animations or still sections. Then you can save the cinemagraph as an animated GIF.

A not-too-subtle naming aside, iTest is a medium for Samsung to let iPhone users get a taste of Android with the Galaxy flavor.

Redmi teased the launch of a gaming smartphone a while ago. It has now confirmed that the company will launch its own gaming phone at the end of this month.
YouTube 1.8M
Facebook 570K
Twitter 197K
Instagram 133K
RSS