A new Motorola Shamu image is making the rounds, a comparison shot next to the LG G3. Is this really an upcoming Motorola Nexus? Let’s have a look.

It’s that time of the year again. Nexus season is upon us, and in full force too – after reports that the Nexus program would be coming to an end in favor of Android Silver, and then reports confusing us further by calling the other reports false, we’re finally seeing somewhat-concrete evidence affirming the existence of a new Nexus. We saw a rather large leak from 9to5Google last night detailing Shamu allegedly, and now we have a follow-up report at hand: a Motorola Shamu image, in which the alleged Nexus is positioned next to the LG G3.

Pictured is a massive Moto X-looking phone, which is exactly what the render from last night (embedded below) had us expecting. It’s a bit larger than the LG G3, which allows for the rumors of a 5.9-inch screen size to be true, but we don’t know much apart from that.

The standard “grain of salt” notice applies with this image as well – the source is kind of icky, as this image was posted in the comments section of two Android-focused news sites, and our own Stephen Schenck notes various oddities such as the difference in the angle at which light is hitting the two camera sensors.

With that all aside, this has a pretty good chance of being the real deal, and we’re excited to (hopefully) see more leaks in the coming days and weeks. 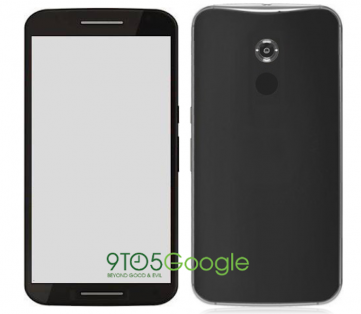