The international RAZR HD is apparently well into carrier testing, but will it launch with a less-capable camera than we’ve heard?

Motorola’s Atrix HD may be the company’s newest high-end Android, but there’s been another waiting in the wings for some time now, bringing HD graphics to the company’s RAZR series. The Droid RAZR HD should be coming soon to Verizon, as we’ve already had the chance to see some pics of the handset all decked-out with its Verizon badging and even saw the model turn up in some new Cellebrite software. We’re still waiting for word on just when it will launch, but Verizon subscribers won’t be the only ones who get a shot at this phone, as Motorola should also be releasing an international version of the Android as the RAZR HD.

The model in these pics appears to be in testing for Vodafone’s network. As such, we’re not sure if everything we see here will make it to the final product, like the unusual pattern on its rear cover; certainly, we don’t expect to see those holes for external antenna input, in any case.

While we’ve previously been talking about the chance for the RAZR HD to get a 13-megapixel camera, the source behind these pics says the phone has an 8-megapixel sensor, instead. It’s unclear just how accurate that report might be, though, as info on the handset appears to be getting to us fourth-hand. 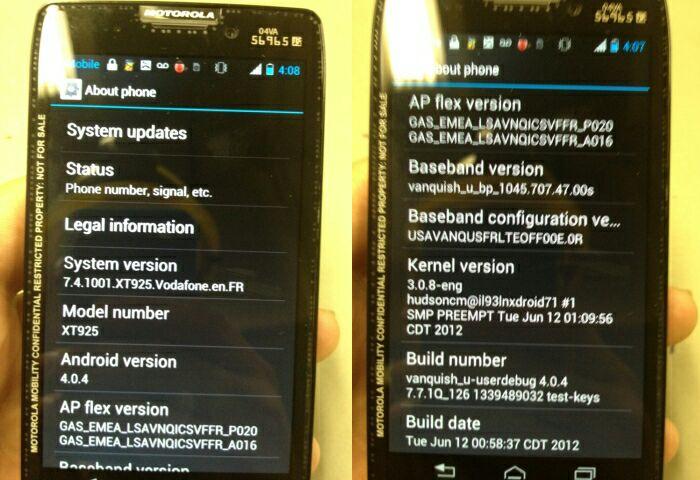