Motorola Moto E (2015) review rebuttal: a flagship in its own right

It’s really easy to dismiss a non-flagship smartphone as unusable. Why? Simply because of the fact that it’s mid-range or low-end. Historically, these words have been used to describe smartphones which barely function, unable to muster anything more than the littlest of usability. That’s probably what went through the heads of most as Motorola announced the second-gen Moto E, adding in 4G LTE and bringing the smartphone to $150. In the world we live in, in which flagship smartphones regularly retail for prices north of $600 in the United States, that’s a pretty low number. It must indicate poor performance, just as the mid-range smartphones of yore, right? Wrong. And here’s why.

The case for a low-end smartphone 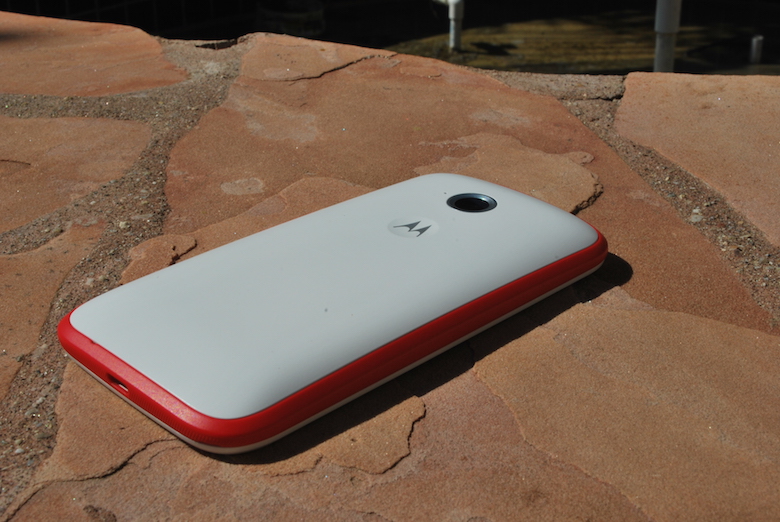 It’s important to note that the Moto E isn’t (unlike a vast majority of the phones that go through the review treatment at Pocketnow) a high-powered superphone. When I received our Moto E review unit, I decided to (thanks to a little tip from Michael Fisher) evaluate the device from a different standpoint than I would a flagship. Rather than take this phone on from the angle of a shopper with the cash to pick up any phone, I looked at it from an angle I’m uniquely suited to do so from, as a student. I asked myself, as someone strapped for cash, would I want to be buying this phone? The answer I arrived at was a yes, and for a few reasons.

It’s (almost) as responsive as a phone gets 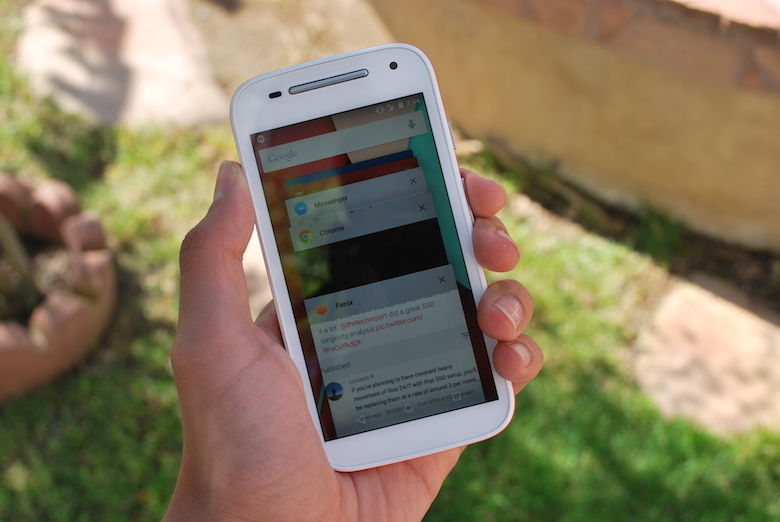 One thing I was pleasantly surprised by when evaluating the second-gen Moto E (the model I had was a 4G LTE-inclusive white model, by the way) was the performance. While it’s wrong to purchase this phone yearning for the performance a high-end processor can provide, the SoC in this unit (a Qualcomm Snapdragon 410) provides commendable performance.

Going through day to day tasks – for me, that means carrying on conversations in Hangouts and Messenger, checking and responding to emails, catching up on reddit, and scrolling through my Twitter feed in Fenix for the most part – is a breeze, with stutters being the exception rather than the rule. If you’re a gamer of any sort, looking elsewhere would be in your best interests; dealing with the limited graphics capabilities of the Adreno 306 GPU isn’t the greatest idea, though casual gaming should be fine. And as long as you’re careful to not have too many apps open at once, that 1GB RAM limitation won’t be much of an issue to work around, either.

The bottom line with performance is not “you get what you pay for” – it’s that and more. The Moto E delivers, and it delivers well, at that. 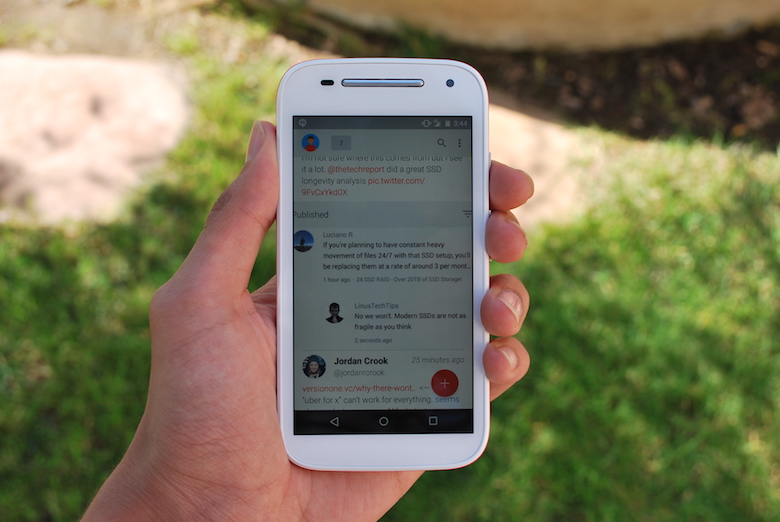 Social media on the Moto E is, well … a bit of a dilemma. What totally blindsided me when I began using the phone was that certain features make this thing almost a perfect phone for updating friends about all things you. First of all, the obvious one: network speed. One thing that’s been sorely lacking from low-end smartphones in the past has been LTE support. While there’s an obvious reason for this – a vast majority of the markets these phones are targeting don’t have LTE infrastructure nationwide, and a buyer of one of these products wouldn’t want to pony up for an LTE data plan anyway – the inclusion of the speedier network spec is very much welcomed.

Using the Moto E across southern California, the device regularly pulled network speeds above 50 Mbps, both for uploads and downloads, when tested on T-Mobile USA. While this may simply have to do with T-Mobile’s coverage in these areas being solid, comparisons with other phones also on T-Mobile show that it’s more likely the Moto E’s radios are simply very good performers. This is a tool that is amazing to have, especially in the age of live-streaming all that we do.

Another pleasant surprise with the Moto E, this one less expected from the get-go, was the battery performance. The lithium ion 2,390 mAh pack may not look too hefty in comparison to other phones, but the combination of Motorola battery prowess and the fact that this energy pushes a relatively-low-res 960×540 display make it so that you can get stellar performance from it. Using the phone as my daily driver, even, I was able to get two days of usage out of it. That’s even more than I got out of the DROID Turbo, and that phone is advertised for its battery performance. It’s safe to say that this battery will last you, no matter your usage.

At this point you’re likely wondering, if I’m able to rave about the network speed and battery performance, where the fault in this phone’s social abilities lies. Unfortunately, it’s the camera. Perhaps it’s not right to complain about a camera on a low-end device, but it’s the one thing that keeps this phone from being a social media powerhouse. I didn’t even realize how often I shared images with friends until I took the Moto E for a spin and realized that I couldn’t focus on words when sending a picture of a menu, or capture an action shot without it blurring the image, or shoot footage of anything at all during nighttime. I found myself switching to the phone in my other pocket, even, just for a quick snap. It’s one big issue (or not, depending on how you use the device) that’ll make using this phone an adaptation process to simply share less imagery. 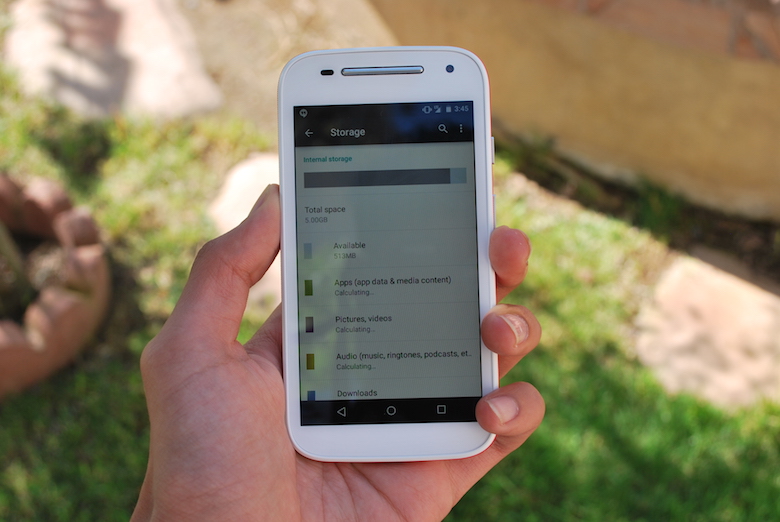 When you’re examining a phone that isn’t packed with the buzzwords and gimmicky features a flagship is certain to have, you begin noticing the little things a lot more. And let me tell you this: the Moto E has a lot of those. It all starts right when you get the phone. On first boot, heading through the setup process, you’ll be greeted by Motorola Migrate – a tool that makes the setup process transferring data from your old phone near-seamless.

Once you begin using the phone, another thing becomes obvious: this phone is all about Lollipop and Google. It runs nearly-stock Android, with Lollipop right out of the box, and it features very few add-ins atop the vanilla OS. The tie-in with Google services is unmatchable, and given certain limitations (see the next paragraph), you may be forced to live with them. The good thing is, this integration makes for a very fluid Android experience – I enjoyed it nearly as much as I would a Nexus device.

Motorola, in the act of releasing a $150 Android smartphone, had to make some hardware compromises, one of them being the storage size. The Moto E unit I had came with just 8GB of storage out of the box, with a large sum of that eaten up by the operating system and built-in applications. I could only feasibly install about three applications – thankfully, that was enough to get through daily life for me, but if this is your only phone you may run into issues. Motorola has, however, thrown in a microSD card slot, so if you’re interested in purchasing a Moto E, it may be smarter to add the cost of a microSD card that can fit all the data you need to the cost of the device itself. The hidden costs do add up.

Continuing on about hardware compromises, another thing you’ll notice is the display. Looking at it head-on, all you’ll notice is that the display is pixelated (which is to be expected, thanks to the low pixels-per-inch count), and perhaps not even that. But turn it even slightly off-axis, and you’re met with a very noticeable yellowing. This isn’t an issue only visible at extreme angles, either: buyers of this phone will have to accept that viewing the display from any angle but head-on is not going to be the greatest experience.

Don’t let that turn you off, though: the hardware isn’t all compromises. There are even a few small things that I found to be great about the Moto E’s outside. Specifically, the fact that you can swap out Grip Shells or Bands on the fly to change your phone’s color and match your mood. I personally came to love the combination of orange-red and white on my unit. And beyond the customizability, the construction itself is quite solid. The phone has significant heft in the hand, enough to remind you that it’s definitely there, but not quite enough to be too heavy to deal with. Having water resistance isn’t bad, either.

A real contender for the price 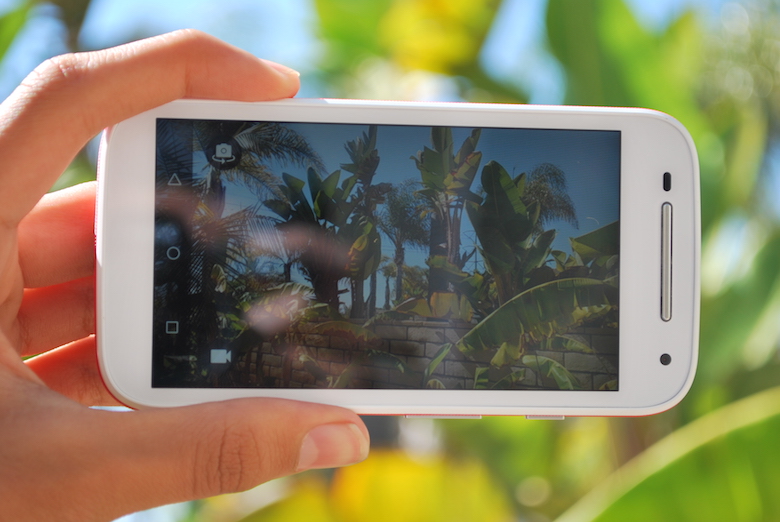 So, with all this said and done, is the Moto E worth your money? The answer entirely depends on who you are. If you can afford a flagship smartphone, this isn’t the phone for you – perhaps it’d function better as a backup to your already-trusty device thanks to its low price point. But if you’re someone who needs a smartphone (though not the associated price), this is a well-balanced option at a reasonable cost.

From Motorola’s perspective, this phone is a home run, and rightly so. The landscape for low-end smartphones with this type of feature set isn’t very much saturated, and the company has few competitors for such a compelling option. If you purchase this phone, there’s one thing that’s for sure: you can’t go wrong with the Moto E.