Motorola Moto E review: you get what you pay for

This review’s subtitle is an axiom known to parents, financial advisors, and other dispensers of wisdom far and wide – but it’s important to note that it’s not necessarily a condemnation. The newest product out of Motorola Mobility has an awful lot going for it precisely because of its bargain-basement price tag. With the Moto E, Motorola aims to provide an easier upgrade path to the 70% of global mobile users still stuck on feature phones, to convert smartphone ownership from a privilege to a right.

But to coin another adage, “you don’t get something for nothing.” While Motorola managed to obscure most of the cost-cutting that made last year’s Moto G possible, the Moto E’s sub-$130 price point brings another set of pressures entirely. The question is, did this “affordable smartphone” sacrifice too much of its “smartphone” nature on the way to becoming “affordable”? 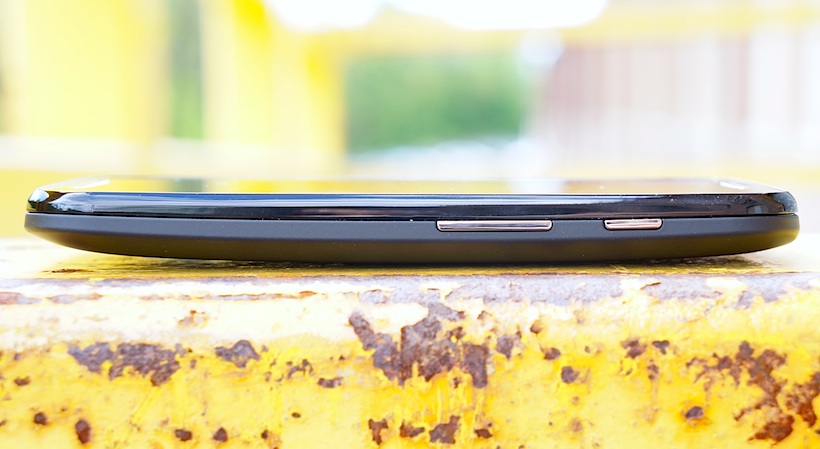 One glance at the Moto E’s spec sheet reveals that the phone’s “guts” were ground zero for Motorola’s cost-cutting efforts. This is the first device we’ve reviewed to carry the dual-core Snapdragon 200, the bottom end of Qualcomm’s latest line of systems-on-a-chip. This particular processor runs at 1.2GHz, its Adreno 302 GPU pushing graphics to the qHD display making up the Moto E’s front side.

At 4.3 inches, that screen is fairly large for its class and quite colorful, its vibrance partially compensating for its low pixel density (256ppi). It’s mainly the panel’s mediocre viewing angles that give it away as a lower-cost component.

The concessions to cost-cutting continue down in the nethers: there’s no LTE here, no NFC, and a paltry 4GB of built-in storage. The camera is a decidedly unspectacular fixed-focus 5MP module with no front-facing counterpart, the battery a smallish 1980 mAh pack. And you can forget about luxuries like an IR port or dual-band WiFi: WLAN support is limited to 802.11 b/g/n on the 2.4GHz band.

This rather unimpressive bundle of features serves as the filling for a thick (12.3mm), medium-mass (143g) casing coated in soft-touch paint and resembling something between a compressed Moto G and a puffed-up HP Veer. In all, it’s a somewhat homely package whose lone concessions to style are the asymmetric chrome strips hiding the earpiece and speakerphone up forward. Back aft sits a replaceable back cover, with different colors available for $14.99 a pop at Motorola’s website. Hey, at least the distinctive dimple made it. 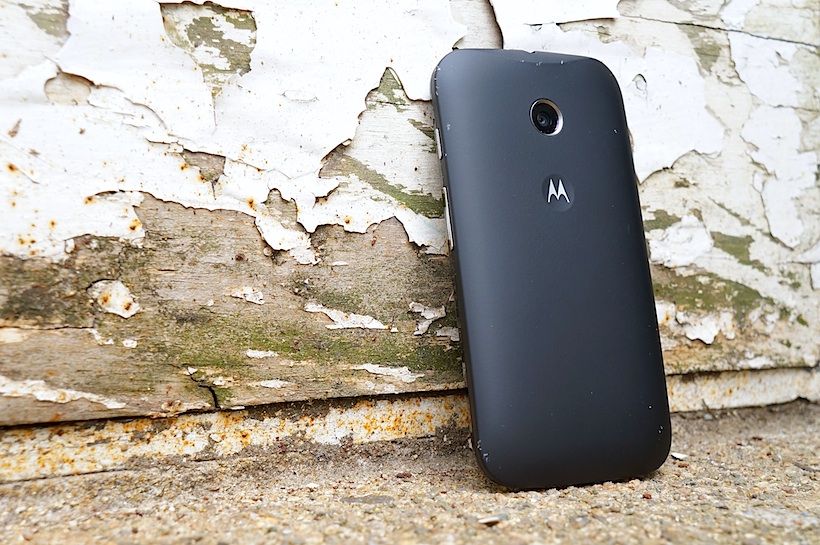 Of course, Motorola’s not after fashionistas here. With the Moto E, the company promises a smartphone “made to last,” and to that end the device is somewhat ruggedized. Gorilla Glass 3 protects the display from scratches and impacts, while the interior boards have been treated with Motorola’s water-resistant nanocoating. The soft-touch paint job is pretty easy to scuff up, as we discovered with a few 6-inch drops onto concrete (sound familiar?), but the E still feels like a phone you can take almost anywhere. It’s pocketable but sturdy, low-profile but rugged: the kind of smartphone you want with you when things might get a little dicey. It’s the MOTOFONE of the smartphone world.

And the specs aren’t all bad. A MicroSD slot goes a little way toward making up for the onboard storage shortage, supporting cards up to 32GB in size. A hefty gig of RAM backs up the processor. Dual-SIM capability and a digital TV tuner are available in some markets, along with an FM radio. And topping it all off, the latest public version of Android is here – with guaranteed timely updates from Motorola. 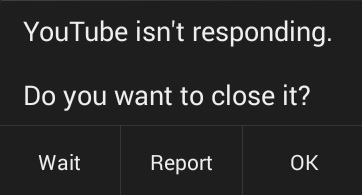 The Moto E’s version of KitKat closely resembles the build seen on the Moto G and Moto X: almost-stock 4.4.2, with just a handful of Motorola-specific titles that help much more than they hurt. Familiar apps include a stripped-down version of Motorola Assist, which mutes alerts when you’re busy or sleeping, and Motorola Migrate, which helps you move content from a previous phone to the Moto E. The stock launcher is plain-Jane Android – something we always love to see.

But it’s held back by something we never love to see: lag. For all its supposed optimization for low-spec devices, it seems even KitKat has met its match with the Snapdragon 200. The story of using the Moto E is the story of waiting: even at medium typing speed, keystrokes lag well behind, sometimes tripping up the autocorrect and resulting in wonky sentences. Switching between apps using the multitasking ribbon almost always takes a few extra beats. And we haven’t seen so many force-close app crashes since the first days of Ice Cream Sandwich. This isn’t a phone you can trust to manage itself; open apps need to be aggressively policed, and you should plan to restart it on a regular basis just to keep it happy. 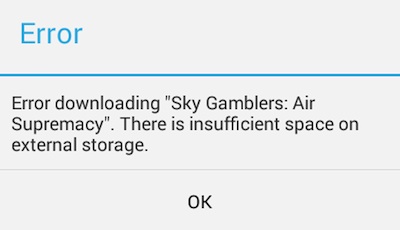 Also, you might as well factor in the cost of a MicroSD card if you’re considering a Moto E. With just over 2GB of user-accessible storage out of the box, you’ll power through your allotment in no time without a memory card there to soak up your media.

To be clear: the Moto E isn’t a disaster on the software front. For someone aware of the limitations of the device, these stumbling blocks will come as no surprise. And Android being the powerful and adaptable platform that it is, the Moto E is quite a capable little smartphone. But its constant lag and pervasive instability will grate on the nerves of those looking for something that “just works.”

Fortunately, one Moto E feature does fall into that category: a new app called Motorola Alert. A kind of all-in-one safety suite, Alert lets you specify an emergency contact to call with a single touch; on a trip, it lets trusted contacts track you on a map so they know you got to your destination; and it provides a panic button that triggers an alert klaxon if you need to get everyone’s attention.

The siren is probably Motorola Alert’s least-useful feature; we’re not sure how well it’ll do at raising the public alarm. But the tracking tools seem to work quite well. While various third-party apps provide similar functionality, Motorola Alert is very simple and seemingly quite reliable: we could see it doing well for a wide range of people including parents, disaster victims, and those who live in dangerous neighborhoods. 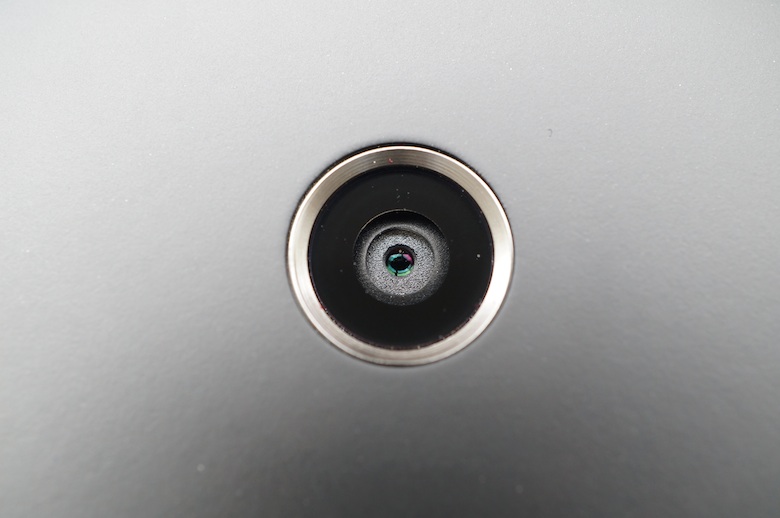 The Moto E’s camera is everything you’d expect from a fixed-focus, 5-megapixel shooter. It’s the only camera on the phone, and in bright sunlight with a good angle and a little bit of patience (or alternatively, just a bunch of burst shots), you can capture some good-looking photos. Even Motorola’s temperamental HDR mode offers a boost from time to time.

But turn the lights down, and, well … it becomes clear pretty quickly that this isn’t a phone for night owls, especially considering the lack of a flash. Also, the absence of variable focus means close-up shots are basically off the table, and the viewfinder itself is slow to launch, slow to save, and slow in general.

Also slow: the frame rate when shooting video, which the Moto E does at a max resolution of 864×480, with all the rolling-shutter, slow auto-exposure artifacts you’d expect from a low-end smartphone.

In short: the camera here is nice to have if conditions are right, but overall it’s basically an afterthought. 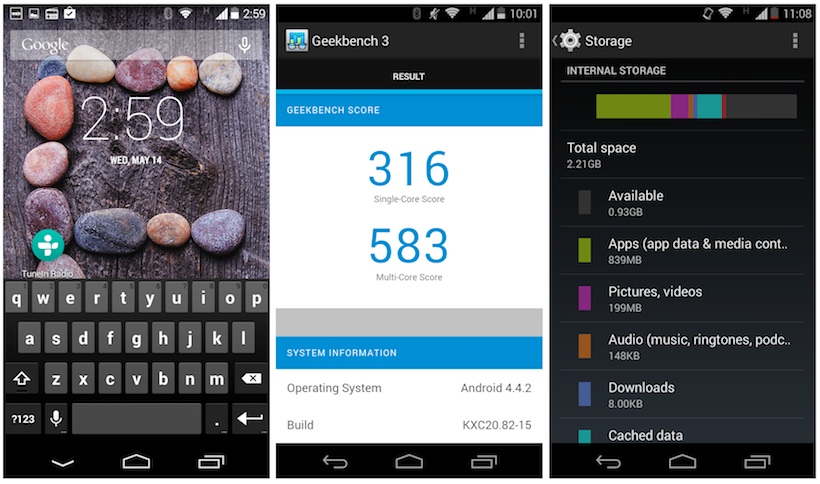 For all its sacrifices on the accoutrements, Motorola’s focus on the Moto E’s fundamentals is just as sharp as ever. From reception to voice calls to endurance, this device is a trouper of the first order.

Motorola’s 85-plus years experience in radio design and manufacturing is especially prominent in an area we usually gloss over: the FM receiver. That’s a more important feature for emerging markets –as Motorola’s website says, “there’s free music in the air”– and the Moto E does a great job of snapping it up no matter what earphones it’s using as an aerial. We heard almost no static when listening to local radio outdoors, and even when we ducked inside, the Moto E held onto a cleaner signal than we’re accustomed to on other FM-equipped smartphones.

Of course that excellence carries over to the cellular side as well. In seven days of testing on AT&T’s HSPA network between Greater Boston and New York City, call quality was seldom short of excellent on each end of the call. That held true even in speakerphone mode during our test period, with the single front-firing loudspeaker rendering two-way conversations much clearer than on comparable devices in its class with rear- or side-firing speakers.

We were slightly concerned about the endurance of the Moto E when we first began using it, especially when a day of heavy use shut us down after only about eight hours, with less than 4 hours of screen-on time. But that was a stress test early in our review period, full of near-constant audio streaming and ceaseless picture-taking. As our usage calmed, the phone’s stamina improved commensurately: it now routinely delivers closer to 5 hours of screen-on time per 13 hours between recharges, an impressive stat for such a small battery. That’s without using Android’s power saving mode, which could extend endurance even further. 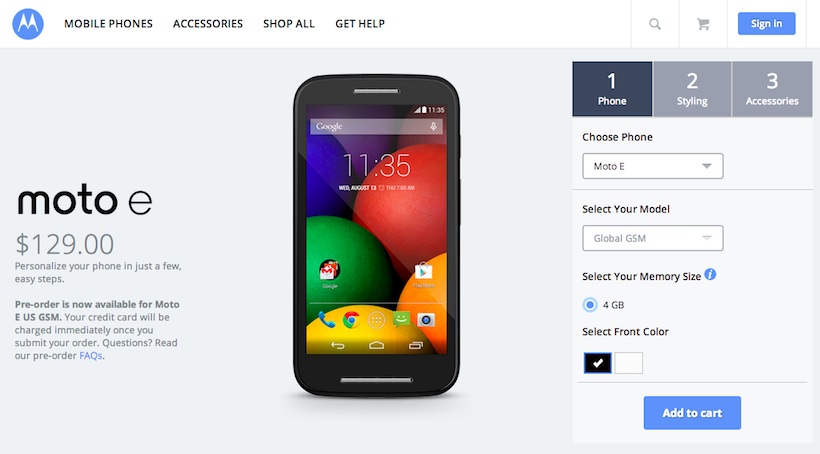 If the Moto E follows in the footsteps of its immediate sibling the Moto G, it will go on sale in more than 44 countries around the world. Regional variations in pricing should be expected; in the US, the Moto E currently retails for $129.00 directly from Motorola. It’s available in US or global GSM bands, with a front in white or black and several backplate color options for an additional cost. 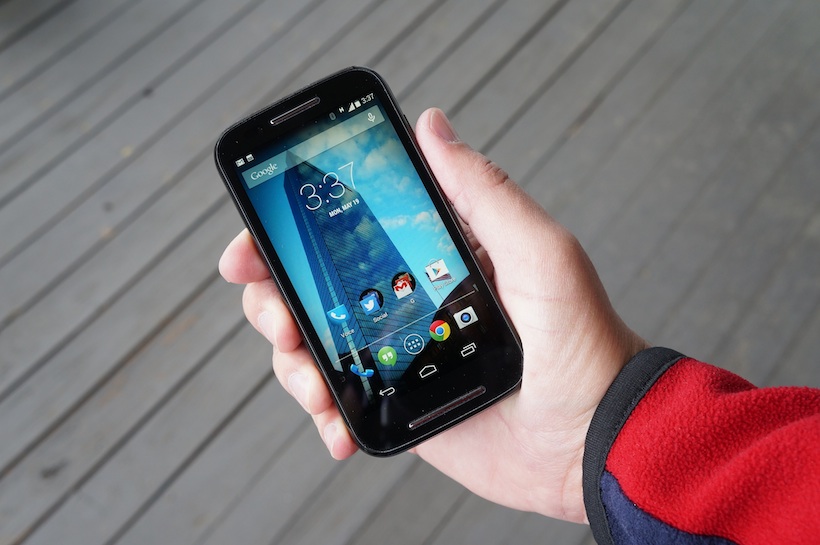 Between the software stumbles, the storage shortage, and the camera, you might think the Moto E a pretty wimpy contender. Frankly, we’re not confident that it’ll age well; consistent updates aside, smartphones usually slow down over time, and performance this sluggish and inconsistent out of the box gives us pause. In the US, where just $50 separates the E from its bigger brother, we think the Moto G is a much better buy.

But really, the Moto E was made with a global focus. In some of the markets Motorola’s targeting with it, the price gulf between G and E is far wider. And in those markets, the Moto E brings you durability, excellent call quality, and modern software capable of quite a lot. Whether it’s the world-changing development Motorola hopes for has yet to be seen, but in terms of getting what you pay for, the Moto E is a very good value. Just remember to factor in the cost of the MicroSD card … and remember, when it gives you trouble, how much you didn’t spend on it. 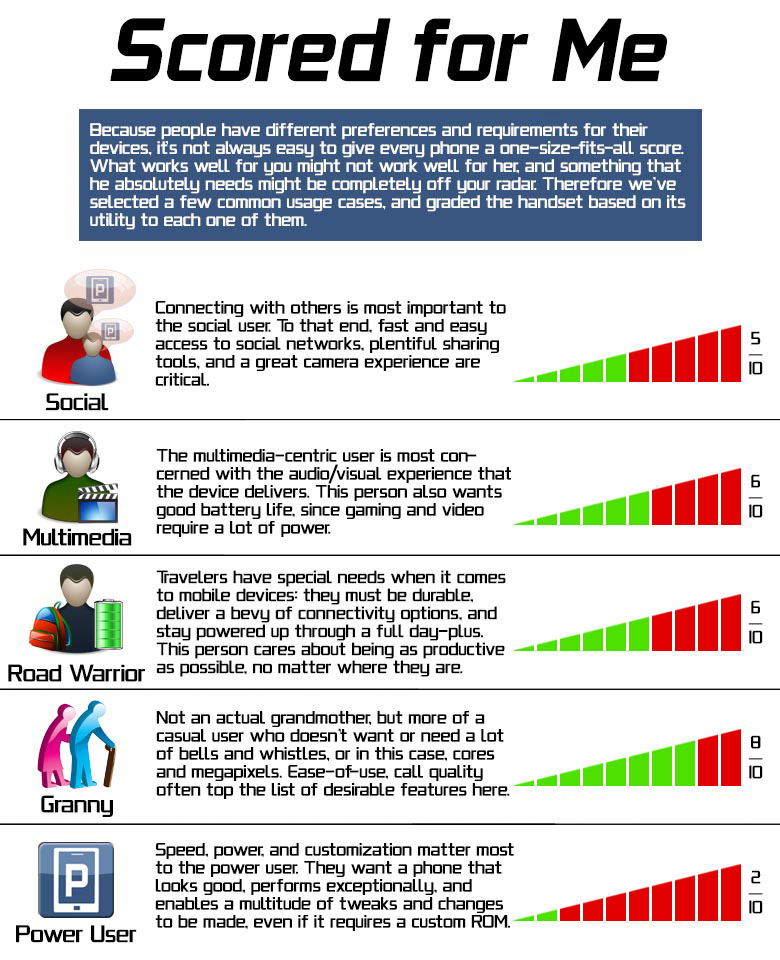