The Moto G series of Android phones has always been considered one of the best choices for a smartphone within the $200 price range. You can usually expect a good blend of stock Android with some great unobtrusive Motorola customizations and some nice, average, reliable hardware. The Moto G phones are also usually kind of boring, but that’s a good thing. There’s nothing terribly crazy going on with the G series.  They’re usually just no-nonsense, affordable smartphones that are pretty great for normal users that don’t care about fancy in-screen fingerprint scanners that don’t work very well, trendy fake background blur camera filters that ruin your pictures, extra thin bezel screens that reduce the effectiveness of a protective cover, or multi-camera zoom capabilities that complicate photo usability. The Moto G7 Power breaks the mold a little bit and does something very special though… something that may be very valuable to the average budget-conscious users the G series has normally been designed for… something that those $1000 smartphones aren’t even capable of.  Week long battery life! Read on to find out how the Moto G7 Power stacks up as a smartphone that you could probably take on vacation without packing a charger.

Usually we don’t talk about the battery life in our reviews until closer to the end, but the Moto G7 Power has such great battery life that we have to bring it to the top to brag about it right away. After its first 100% full charge, I turned the phone on Wednesday morning at around 10:30am. With my normal usage, which included setting up the whole device from scratch, installing my favorite apps, adding my email accounts, logging into a bunch of social media apps, taking a good number of photos (shot in DNG format), uploading photos to the cloud, sending pictures to friends, browsing the web, etc…. after all of that the battery lasted until about 9:30pm.  Oh, sorry… I meant to say that it lasted until 9:30pm on the following Tuesday.  Yeah, that’s more than 6 days, but not quite a full week of my normal usage on the Motorola G7 Power’s 5,000 mAh battery.

Normally I like to complain about non-removable batteries on phones since the ones that are removable are so easy to simply pop-out and pop-in a fresh one to keep the phone going for the rest of the day. With the Moto G7 Power, I can forgive the non-removable battery.  Even when the battery level is down to 9%, that’s still enough for maybe 14 more hours. 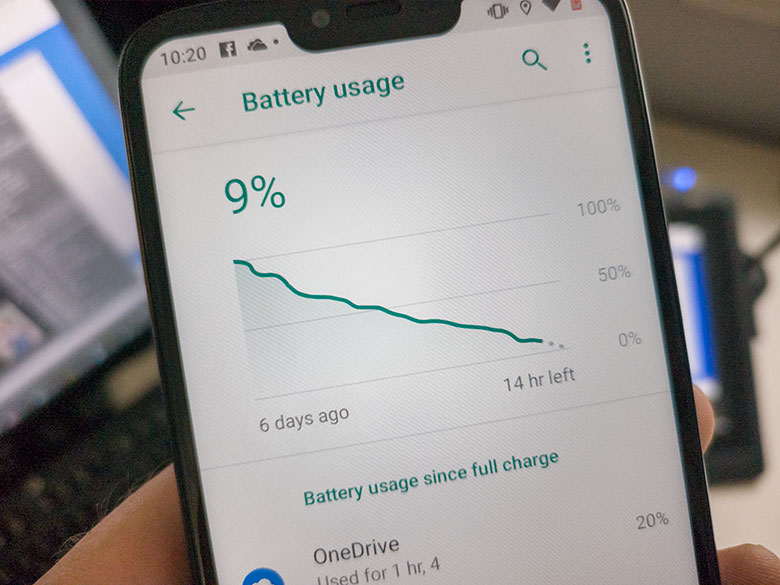 Okay, I know what you’re thinking… if this thing has almost a full week of battery life AND runs Android, it must be really thick and heavy and ugly… like that Energizer phone we saw at MWC 2019. This may not be such a bad thing. Back when every smartphone maker kept trying to make the thinnest device around, many people were not impressed and would say that they’d rather have better battery life than a thin phone. In fact, many people purchase rediculously thick extended battery packs to plug onto the backs of their thin phones. 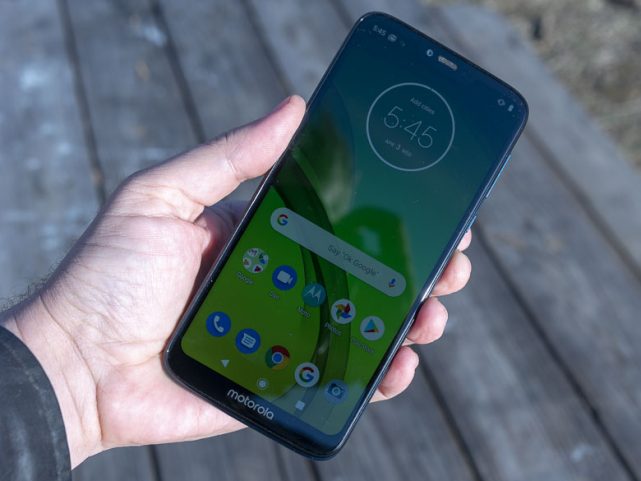 As it turns out, no… it feels just about the same as any modern non-folding flagship smartphone that’s available today. It’s certainly not extra thin, but it’s not the size of a brick. It’s honestly quite easy to hold and really isn’t much different from the other phones on the market in terms of form factor and weight.

You can see above that the bezels are not quite as thin as the more-expensive phones, but that’s a good thing because it leaves some room for a nice secure protective case that doesn’t cover up the edges of your screen. Yes, there is a big notch at the top too, but those are in style these days and the notifications icons fit pretty well on either side of it. 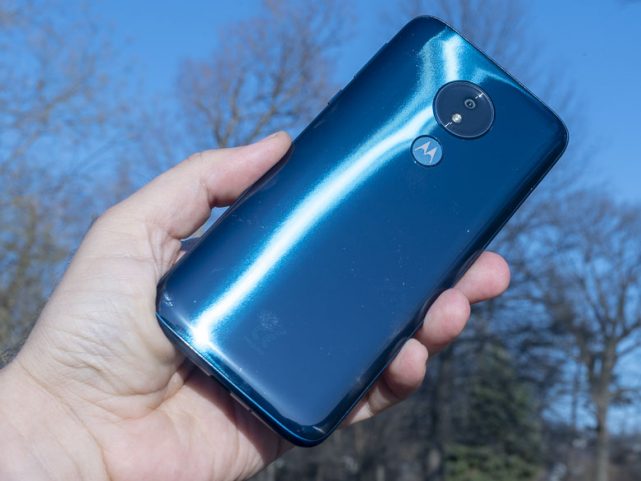 The Moto G7 Power looks really nice too!  It doesn’t feel like a budget phone and doesn’t look like one either. Our version has the glossy blue body and it’s beautiful. The dimensions are a respectable 159.43 x 76 x 9.3mm. 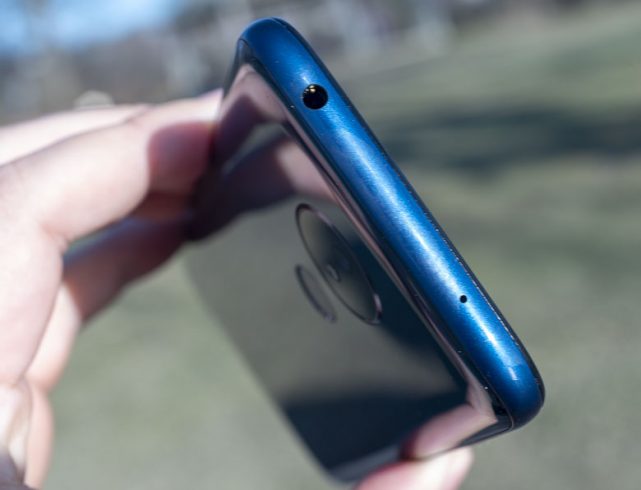 Hey, look at that! The Moto G7 Power has a standard 3.5mm headset jack on the top! You don’t have to use a silly dongle or buy expensive Bluetooth headphones for this device.  Oh, and as an added bonus, the wired headset that you plug into this will work as an antenna for the FM radio that’s built in.

On the left edge, there’s the SIM card tray with the usual pin-hole for popping it open. 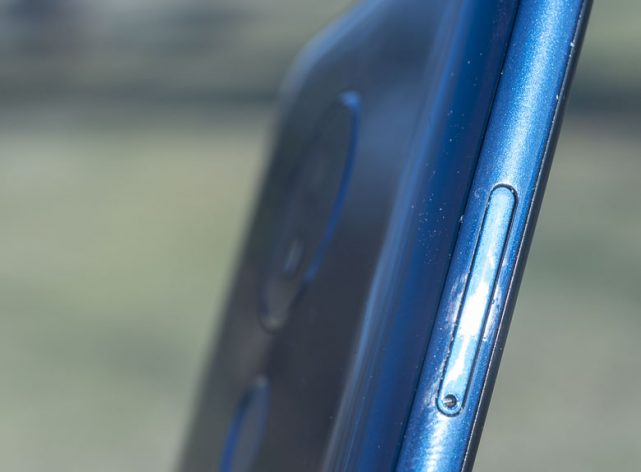 This is also where you’ll find a MicroSD card tray where you can add more storage space if the 64Gb of built-in storage isn’t enough. This is a great, inexpensive way to give your phone more room for apps, music, video, and photos. 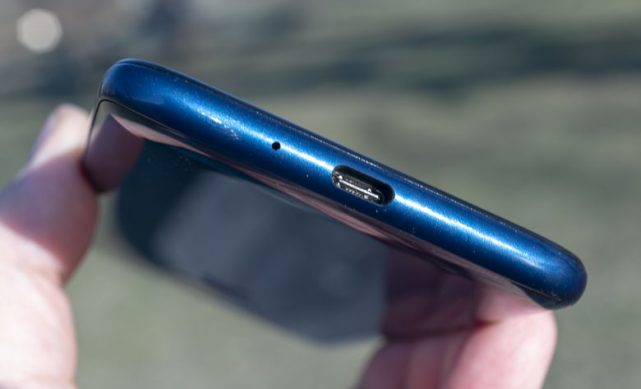 At the bottom there is a USB-C port along with a microphone hole. The USB-C port does support turbo-charging so you’ll spend even less time on the charger than that week-long battery life can provide. 15 minutes of charging will get you another 9 hours of usage. 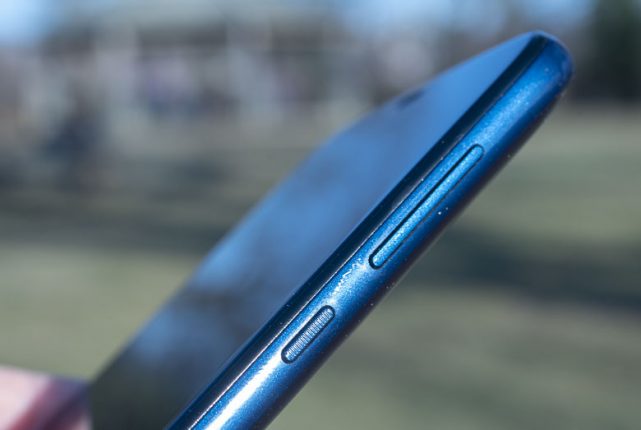 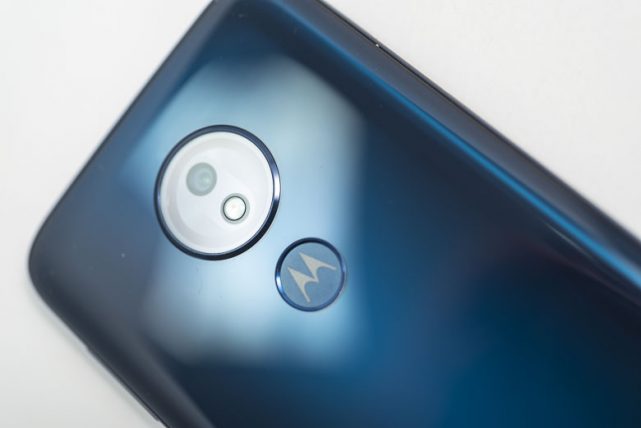 The capacitive fingerprint sensor on the back also has some tactile advantages. It’s inset a bit and also has a different texture so that you can easily feel it while holding the phone. The fingerprint scanner also nicely doubles as a little Motorola logo. Great way to combine branding with functionality!

The Moto G7 Power comes with Android 9 and it’s mostly stock Android. There are a few customizations from Motorola though and they’re good ones that genuinely improve the Android interface. For example, at first, the G7 Power uses the usually Android bottom bar navigation buttons with a triangle, circle, and square representing back, home, and task view.  Most Android users are used to those even though their functions aren’t immediately obvious to new uses. Anyway, after a while, the software will ask you if you want to switch to the single button gesture-based navigation bar.  If you do, this will change those buttons to a single-sausage button similar to what you’ll find on newer iPhones as well as stock Android One.  The sausage button is longer than Android One’s mini-sausage button though.  This will enable gestures for that button and a tutorial will appear showing you what the gestures are. If you don’t memorize the gestures right away, good luck. 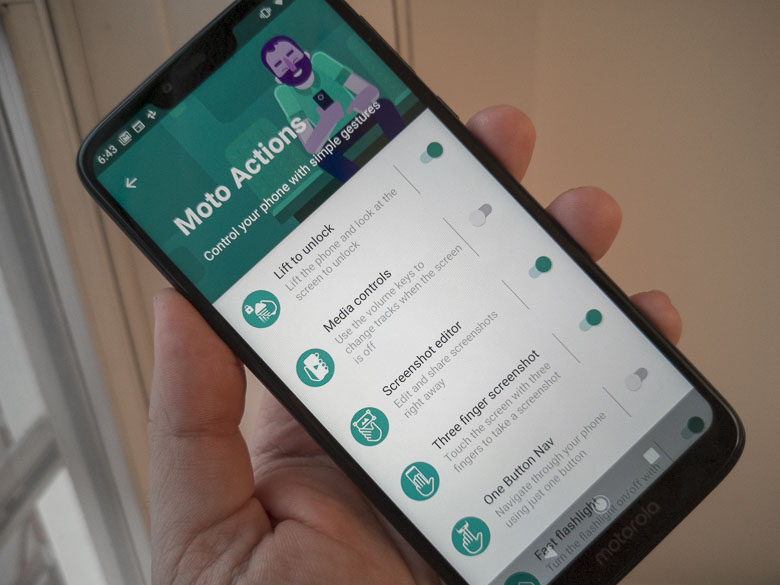 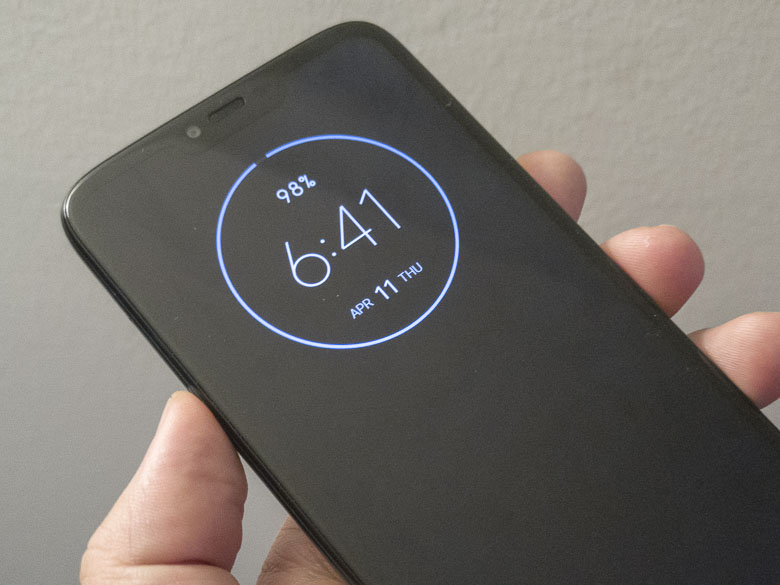 Peek display is similar to Nokia’s Glance Mode where it will just show a little information on the screen in a very low-power mode so that you can quickly see things like the battery level, date, time, and even some little notification icons which you can tap & hold for more details and response actions. 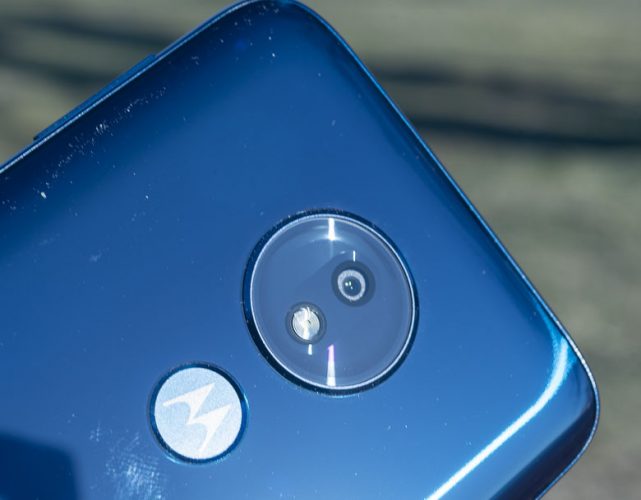 One thing that I was a little surprised with and very happy with regarding the G7 Power’s camera is its ability to save photos in DNG format… not only for the rear camera but also for the front-facing camera.

The rear camera is honestly not bad at all. I would say it’s certainly comparable to an iPhone 6S, but with the RAW DNG support you can have an extra advantage for improving the photos afterwards.

In the two photos above, one is the original JPG while one is from the DNG file (which I edited a bit in ACR). You can tell that there’s a lot of processing going into creating the JPG. Personally, I like the image from the DNG file a lot better even though it has more noise. It looks more like a real (grainy) photograph as opposed to the obviously processed noise-reduction filter used in the JPG photo.

The front-facing camera is absolutely acceptable, too!  Yes, there’s plenty of noise especially in the low-light photos above, but the outdoor daylight ones came out surprising great.

How much would you pay for week long battery life on a modern smartphone?  It turns out the retail price for the Motorola G7 Power is $299, but you can probably find it for closer to $250 at places like BestBuy, Walmart, B & H Photo, etc. Some Amazon sellers have it for even less than that.

I was very impressed with the battery life in the Moto G7 Power! If you’re sick of charging your phone every night so that you can make it through the next day, this is the phone for you. The Moto G7 Power could easily make it through a 4 day weekend away without a charger. You can go camping and hiking without worrying about it. While it probably won’t last a full 7 days of being always on, you could most likely get through a whole week if you turn it off completely at night or when not in use. The camera is totally acceptable too. I’d say it might be better than some of the more-expensive phones out there as well! For $250-$300, the excellent battery life is worth it alone, but the Moto G7 Power turns out to be quite a good all around smartphone as well.

WhatsApp is testing a redesigned layout for the picture-in-picture feature on the latest Beta version of the popular messaging app.

On today’s Pocketnow Daily, we talk about the official date of Apple’s new Unleashed event, Pixel 6 leaks, and more.