Verizon’s got some exciting new Androids joining its lineup, with the announcement of the Motorola Droid Ultra, Droid Maxx, and Droid Mini.

Last week, Verizon sent out invitations to an event scheduled for today, and it sure seemed to be implying that we’d finally see these Motorla Ultra-series devices – the Ultra, Maxx, and Mini we’ve been talking about for weeks now – go official. Sure enough, the carrier has just announced the trio, all running some new Motorola silicon.

The phones run what Motorola calls its X8 Mobile Computing System, but don’t let that lead you to believe we’re talking about an octa-core setup – at least not in any conventional sense. Instead, Motorola is counting a whole lot beyond general processing cores: the X8 had a dual-core CPU, a quad-core GPU, and stand-alone cores for both language processing and contextual computing.

That language processing core will enable a voice assistant “touchless control” mode, letting you even wake your phone with voice commands for a fully hands-free experience. An “active display” feature will let things like notifications show up on the screen without fully waking the phone by only illuminating the needed portion of the display, saving on battery life.

There’s a DROID Command Center widget for quick access to settings and messages, and these phones support a “quick capture” photo mode to help you avoid missing out on fleeting shots with their 10-megapixel cameras. They’ve also all got Ingress pre-loaded, for you gamers who have been itching for a chance to get involved.

As for individual models, the Ultra is super-thin at 7.18 millimeters thick and has a five-inch HD display. The Maxx is pretty thin too, measuring just 8.5 millimeters thick. Despite that, Verizon’s claiming the phone will still enjoy a 48 hour battery life. The Mini shrinks its HD screen down to 4.3 inches.

Pricing is simple: on contract, the Mini, Ultra, and Maxx will sell for just about $100, $200, and $300, respectively. Pre-orders begin this afternoon, with the hardware available in late August. 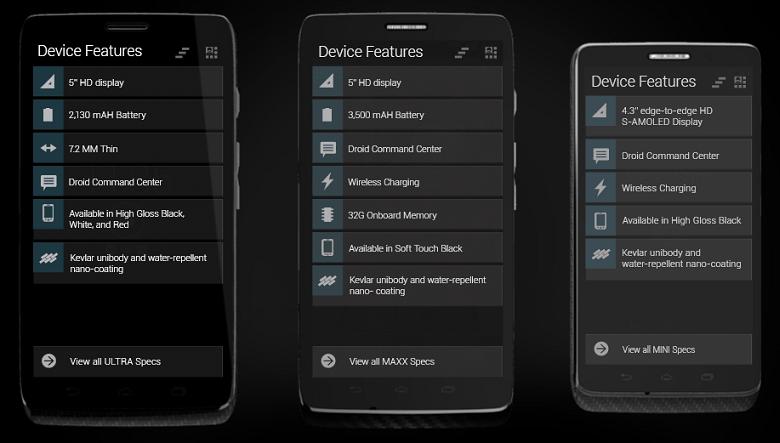 Lenovo and Motorola have extended the warranty of smartphones and accessories until May 31 to help customers affected by the ongoing health crisis.