The Moto Z2 Force debuts as Motorola’s premium smartphone for 2017 with some chips on its shoulder and some new Moto Mods by its side.

For a time after Google’s sale, there was a sense of “normal” within Lenovo’s Motorola. Okay, maybe that analogy ended up the wrong way for many in Chicago.

That sense also trickled down to its smartphones, too. Some plain ‘ol plain ‘ol. A middle road between a valley and a mountain. When you think back to the 2015 Moto X releases, the second set under Lenovo’s reign, you had Style or Pure Edition, you had Force and you also had Play.

The same for the Moto Z — Force, Play and salt and pepper. It was able to get back on the map in a limited sense, thanks to a lot of positive consumer sentiment on Moto Mods — they were the primary motivator for anywhere between 80 percent and 95 percent customers in a brand perception survey. But the bulk of buyers were Verizon customers. They are a strong pool, but thanks to an exclusivity clause, the phone couldn’t pick up much of a draft in the US unlocked market. The Moto Z2 Play may be relegated to a similar fate.

In 2017, Motorola is effectively counting on one phone (and several modular accessories) to help it regain its prestige in the US market. That phone is the Moto Z2 Force. 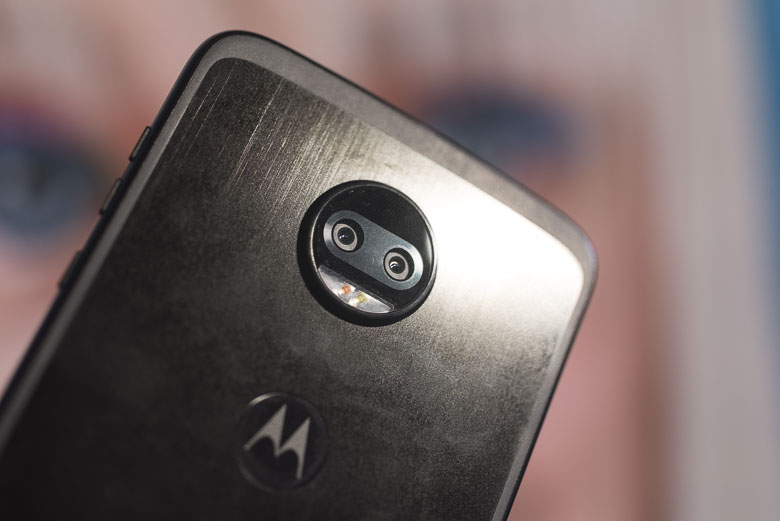 Okay, so we should probably begin with a literal hands-on, right? Well, the 7000-series aluminium unibody might lend a sense of premium build quality, but the darn thing is super-light for its mass at 143 grams. This is not an iPhone 7 with a 4.7-inch screen at 138 grams. We’re talking about a 5.5-inch quad HD display. And this thing has a Snapdragon 835 in it, too (all the specs you need are in this post). What we’re saying is that this is one hefty muscle phone in a svelte bar.

Personal note: in my rush to film all the video coverage we need with my colleagues Adam Doud and Adam Z. Lein, I was running around like a maniac with the phone in hand. It felt like a fin through the sea, but part of it was because it was actually thin at 6.1mm. I can’t definitively say I love or hate it, though. It’s just there. Akin to its rather plain looks, it’s like a canvas waiting to be covered. 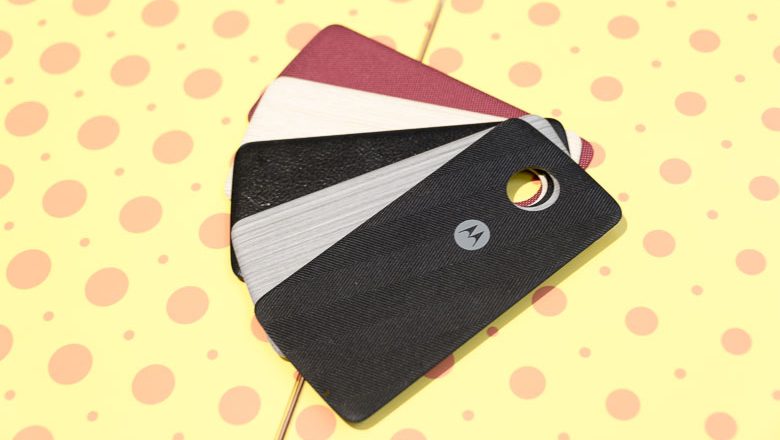 Even with any Style Cover connected magnetically to the back through those pins at the bottom, those things don’t really add so much weight. That connection is secure enough to keep things attached until you intentionally want to peel off a Mod and perhaps slap on another in just seconds. One thing you can’t accuse the Moto Z2 Force of is being unwieldy. It can be as large as you can bear, though. Check it out with a Moto 360 Camera Mod on. By the way, we’ll get to those Mods in a minute.

If you’re a fan of the headphone jack, the good and bad news is that you have 3.5mm adapter to USB-C for that. That display? It’s of the super-versatile AMOLED variety and we were able to see it get adequately bright, we have initial doubts on lower brightness output. The power and volume control buttons are little nibs that might confuse you just a bit as they’re all the same size. Less confusing is the fingerprint sensor below the display, set in from the rest of the surface. It’s touted to make positive scans within 750 milliseconds — a tad slower than sensors on other recent phones.

We move back up to the display to cover another claim from Moto: the shatter-proof Shatter Shield display. It debuted on Verizon’s DROID Turbo 2 as a five-layer stack of polyurethane that took a little effort to scratch, but could not shatter as it was not brittle glass. The phone itself might get bricked by your clumsiness before the screen tears. And throughout the duration of the event, the trio of Moto Z2 Force devices at the drop demo station toughed out dust bite after dust bite like champs. It’s needed assurance for the ambiguity we feel about the build, not that it’s at all incompetent.

The software department, if you know Moto the way we do, is fairly clean on the design and bloatware front. But the OEM is a sucker for added features and they’ve been a boon to us all this time. Take the chop-chop gesture to turn the flashlight feature on and off or the double-twist to get to the camera, stat. One-button navigation through the fingerprint sensor is back from the original Moto Z: swipe left for “back,”down for multitasking, press for “home” and hold to lock the device. This mode of movement seems best fit for when you’ve laid your phone down on a desk, but we’d quicker use a traditional navigation bar. 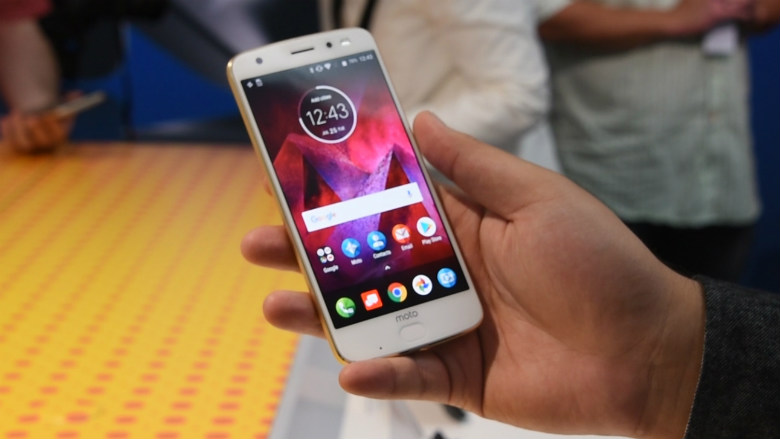 The dual 12-megapixel cameras work in tandem to provide color and monochrome data for hybrid images — much like how a modern flagship from Huawei manages its dual sensors with Leica-enhanced software. The usual trick of software-induced bokeh is included and there was also some boasting about low-light macro performance. A cursory play with this camera wouldn’t do it justice, so look out for our Real Camera Review soon.

As if the phone wasn’t eclectic enough, we got to play with two new Moto Mods at the launch event in New York: one basically transforms the phone into a Nintendo Switch-like, the other brings 360-degree video recording to the device. 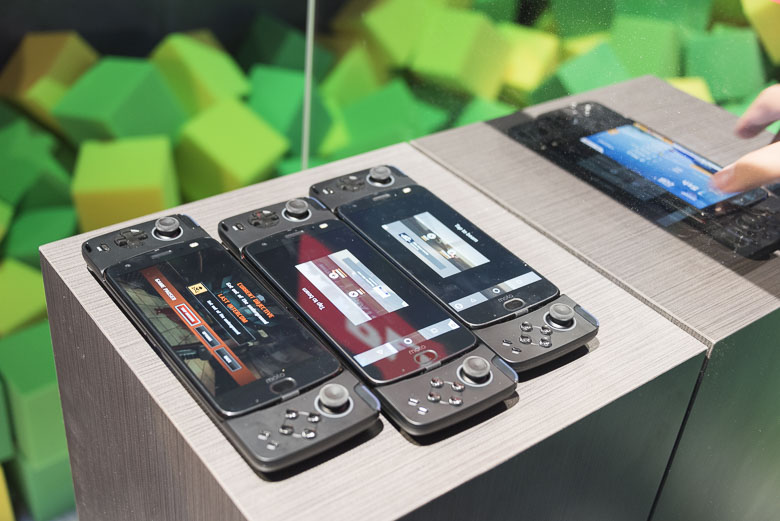 The broad and expansive Gamepad swaddles the Moto Z2 Force with its flanks of axial joysticks (not the resistive gliding kind of vogue) and shoulder buttons… well, they’re more like pads and we’re not exactly hot on them. The left side features a D-pad and the right side has an ABXY pebble button array. It’s a comfortable pad that’s nice for getting through transit or long periods of boredom and the ergonomics aren’t too bad. There’s also no issues with Bluetooth since all the data needed goes through those pin connectors at the back, so reliability should be way closer to 100 percent here. There’s a supplementary battery within that pad — and the phone needs it, too, with its minimal 2,730mAh cell built-in. 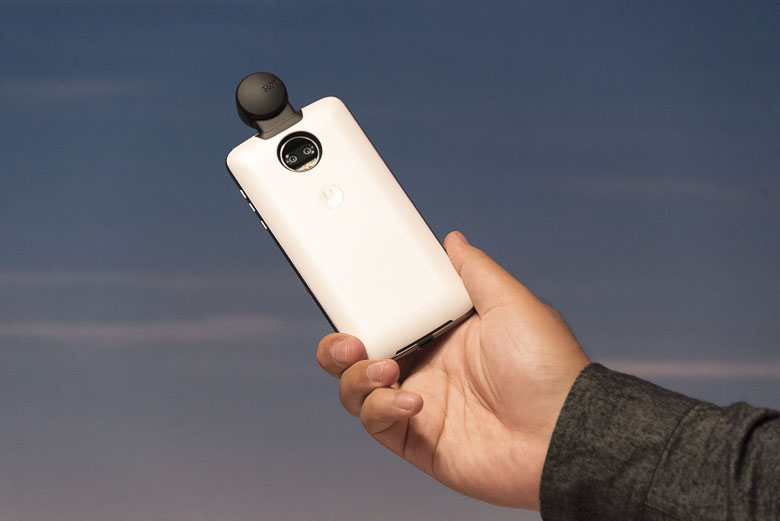 The Moto 360 Camera Mod sticks a couple of cameras on top of the phone and brings 360-degree capture in 4K to users. Four highly directional microphones on the phone add to the experience with 3D Sound recording, too. Complementary software lets users crop in for 2D images and add visual effects to whatever they shoot. It also lets content makers take advantage of 360-degree livestreaming. We noticed that framerate is generally on the lower side with a few drops, but we’ll hold full judgment before a final review and software updates. 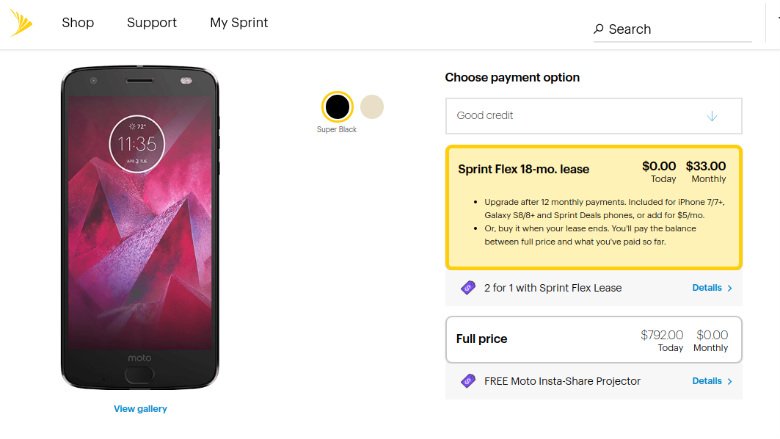 And that might be the thought that kills the chance of a person buying the Moto Z2 Force. Pre-orders are available today from $720.

Yes, multi-year financing is available from AT&T, Sprint, T-Mobile, US Cellular and Verizon. Sprint, by the way, has a two-for-one leasing deal going on right now. And yet some will take that price up higher. That same Sprint network? It prices the phone at $792 or $33 per month over two years. Verizon takes it up to $810 or $35 at its monthly EIP rate.

If people perceive that it’s an expensive phone that needs some expensive toys they might use once and never use again, we may not have a deal, here. Obviously, Motorola is interested in getting passengers on the boat and is offering a free InstaProjector Mod, but all those bulky mods still take up space — by sheer necessity, the mods cover the entirety of the phone’s surface with some going even further than that. Translate that to a backpack or purse and they’re competing with clothes, makeup and other electronics, even.

Lenovo has its work cut out for it. We do, too. Pocketnow has full coverage in the coming days and weeks with a full review, comparisons and more. Stay tuned.