In addition to a “shatterproof” display, the impending Moto Z2 Force could stand out from its “regular” sibling with more memory and internal storage.
Published 10 July 2017, 09:25 EDT

Does it make sense to launch a Moto G5S and G5S Plus so close on the heels of “regular” (and respectable) G5 variants? How about a Moto X4 following a couple of years after third-gen X Style and Play flavors?

Hard to say, but Moto Z2 and Z2 Force releases on July 25 definitely feel opportune, landing around 12 or 13 months on the back of the original modular high-end duo. The two never could afford to change much of their predecessors’ Moto Mods-friendly design, though for a while there, it seemed like they’d at least bring back the headphone jack.

That’s no longer the case, and so the big expected upgrade is a dual rear-facing camera probably shared by the Z2 and Z2 Force. Both devices should obviously run Android 7.1.1 Nougat out the box, pack Snapdragon 835 processing power and sport single 5MP selfie shooters, according to various sources. 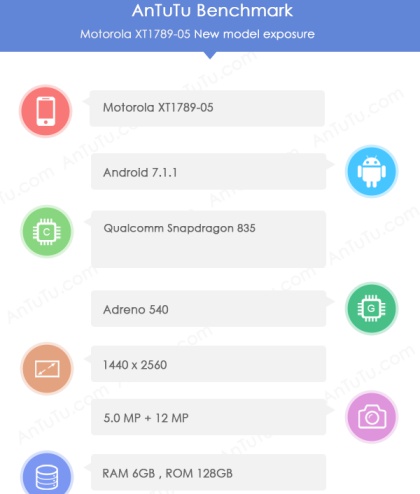 Only one is tipped to offer a plentiful 6GB RAM however, paired with 128GB internal storage space, and it hides under the XT1789-05 model number over at AnTuTu. We’re pretty sure that’s the Moto Z2 Force, Quad HD screen resolution and all, headed for AT&T, T-Mobile and possibly Sprint too in addition to traditional carrier backer Verizon.

Remember, the standard Z2 was also benchmarked rocking 2560 x 1440 pixels, but the difference is the Z2 Force’s 5.5-inch display will presumably not shatter… as easily.

Kuo adds that Apple has to handle ‘key technology and mass production issues’ before a foldable iPhone becomes a real thing.