The day has come when we can finally put an end to rumors, leaks, reports, and our anticipation, as Motorola has finally unveiled its first phone for today, the Moto X Style (the Moto X Play is the second Moto X variant for this year). Contrary to last year, and the year before, Motorola has decided to introduce not one, but two versions of the Moto X. The Moto X Style is what we’re looking at.

The Moto X Style features a 5.7-inch Quad HD display, and is powered by Qualcomm’s Snapdragon 808 processor, just like the LG G4 flagship. This SoC is a six-core chip and is clocked at 1.8GHz. Additionally, there are 3GB of RAM on-board, as well 16/32/64GB of expandable storage options. The camera on the Moto X Style is a 20.7MP shooter with f/2.0 lens, capable of 4K video capture; it is helped by a dual CCT flash, and comes in pair with the five-megapixel wide-angle front-facing camera.

Other notable specs include a 3,000mAh battery (with TurboPower fast charging, capable of charging 50% more power than the Galaxy S6 after 15 minutes of charging), 4G LTE capabilities with Universal LTE bands, front-facing stereo speakers, and, of course, Android 5.1.1 Lollopop with some of Motorola’s own software bits added, like Moto Voice, Moto Assist, Moto Display, and Moto Actions.

The Moto X Style features a water-repellent coating, and you will be able to customize it using Moto Maker (with wood and leather options). The official price has not yet been disclosed, but we’re being told the Moto X Style will cost $200-$300 less than its Apple and Samsung competitors. 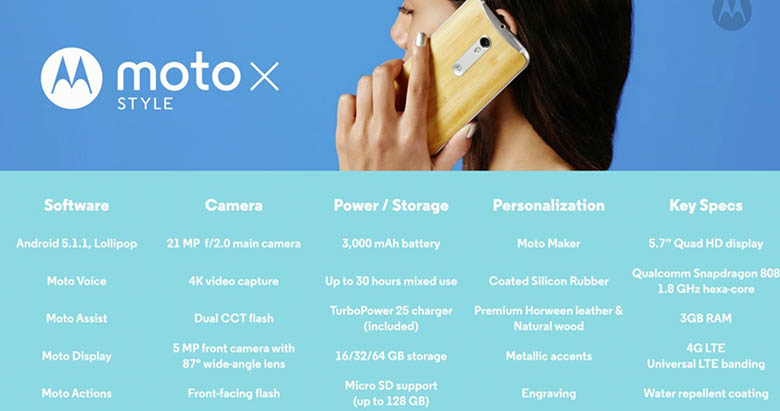 We can finally speculate and guess what Sony may be releasing at its upcoming Xperia event, thanks to the new video teaser.