The Moto X differentiator is a powerful one – you

The Moto X, like all smart phones, is search for a differentiator and it found one by customizing the phones to the customers themselves

The Moto X has been touted as one of the most highly customizable phones available today. No, no, not in terms of specs or anything that would make geeky readers like us excited, but in hardware look and feel. And that, good readers, is what consumers want. The key Moto X differentiator does not have geeks in mind, but consumers.

We want specs. Specs are sexy. Specs are quad cores and megapickels (to borrow from Taylor Martin’s forefathers). Specs are PPI’s and SOC’s and RAMs (if you read that as RAMs and not R-A-M’s and especially that there should be no “s” in the first place, you’re who I’m talking to right now). But to John Doe Consumer, specs are a mystery. They sure sound good, but they’re not really fun to brag about at parties.

And let’s face it, how much are you really going to customize in terms of processor, RAM, etc? These aren’t exactly computers here. It’s not going to be as easy as popping in a processor and tossing in a little solder. And for the most part, OEMs offer you your choice on storage space – 16, 32, etc. It just wasn’t going to happen. Moto had to look somewhere else.

But hardware, now that’s something. This is how your phone looks. This how your phone feels. This is the makeup that makes your phone pretty. It’s the first thing a woman sees on a blind date. It’s “you only get one chance to make a first impression” territory. It can become an extension of your personality.

Now, stop rolling your eyes. I’m serious here. I made several of these points last week on the first impressions Pocketnow Live. You couldn’t hear them, but believe me, they were brilliant. So I’ll repeat them here. It’s how I roll.

First of all, offering a variety of customizations to the case is a genius move. 2,000 combinations of front/side/back is a whole lot of personality to wedge into one phone frame. There has to be a market for this. There are kiosks in just about every shopping mall in America dedicated to the principle of “Make your phone more YOU”. There are even services that will professionally disassemble and dye your iPhone in case white or black isn’t your thing. 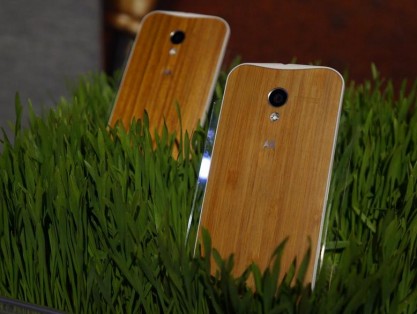 I have to confess that I kinda sorta want a wood phone. I mean come on, it’s WOOD. And it’s a phone! That is just all sorts of tasty awesome. I’ll admit that might just be a geek thing for me. But I would pay money to see someone order a wood phone and then carve their initials into it. That’d be epic, friends.

But on top of all that, what the Moto X is trying to sell is the the customer themselves. That’s no small thing. In a world where specifications have pretty much plateaued, there’s not many more places a phone can go to make it stand out against everyone else. But GS4’s and HTC Ones and iPhones all have something very much in common. They all kinda look the same. Sure there’s differences here and there. The HTC one is rounded on the back, the iPhone has a smaller screen and the S4 a bigger one. But they’re all relatively formulaic in their design.

The Moto X seeks to break away from that by offering this absolute plethora of choice. With a wide variety of colors and materials, Motorola is doing what their lords and masters Google have been doing for years – they’re making you the product. This time though they’re doing it in a good way. Customers who go through the trouble of choosing so much about their phone will feel better about their phones. That wil make them feel better about recommending their phones to others. This is a very good thing for Motorola, who seeks to reclaim their dominance in the smartphone market after a brief hiatus.

If the Moto X can truly deliver this customized experience, it could potentially overcome the shortcomings of ho-hum specifications. Motorola has to show that the phone runs well despite the specification inequality. But the customizability needs to be front and center, or this could turn out to be just another HTC First scenario. But, if the customization flames can be fanned appropriately, then this could be quite the coup for Motorola as they sell the customers to themselves.