Get a look at the first Motorola Moto X ad and see what it says about those old custom hardware rumors.
Published 02 July 2013, 17:08 EDT

Way before the Moto X was the Moto X, back when it was just Motorola’s rumored X phone, there were these recurring rumors about the unprecedented extent to which users might be able to customize phone hardware at the time of ordering. Sources seemed to go back and forth on the degree to which such customizations might be possible, but they tended to get a lot less interesting as time went on – one of the more recent suggestions was little more than the idea that the phone could be available in a couple dozen different colors. Now the Moto X has gone official, and as Motorola gets ready to start promoting the Android’s launch, it’s once again making us think about that whole issue of custom hardware.

AdAge has revealed the new Motorola ad, set to start running in major newspapers tomorrow. With Independence Day coming up for US citizens, the ad attempts to capitalize on all the jingoism that will be running rampant, emphasizing the Moto X being manufactured at home in America.

The ad’s copy refers to the phone as “the first smartphone that you can design yourself,” but doesn’t go into detail about just what that means. Motorola exec Brian Wallace didn’t elaborate much on that item in an interview discussing the Moto X campaign, but did describe a company effort to make phones like the Moto X as unique and personally relatable as shoes or watches.

Any guesses as to what we might see? More than just colors – a choice of materials, maybe? 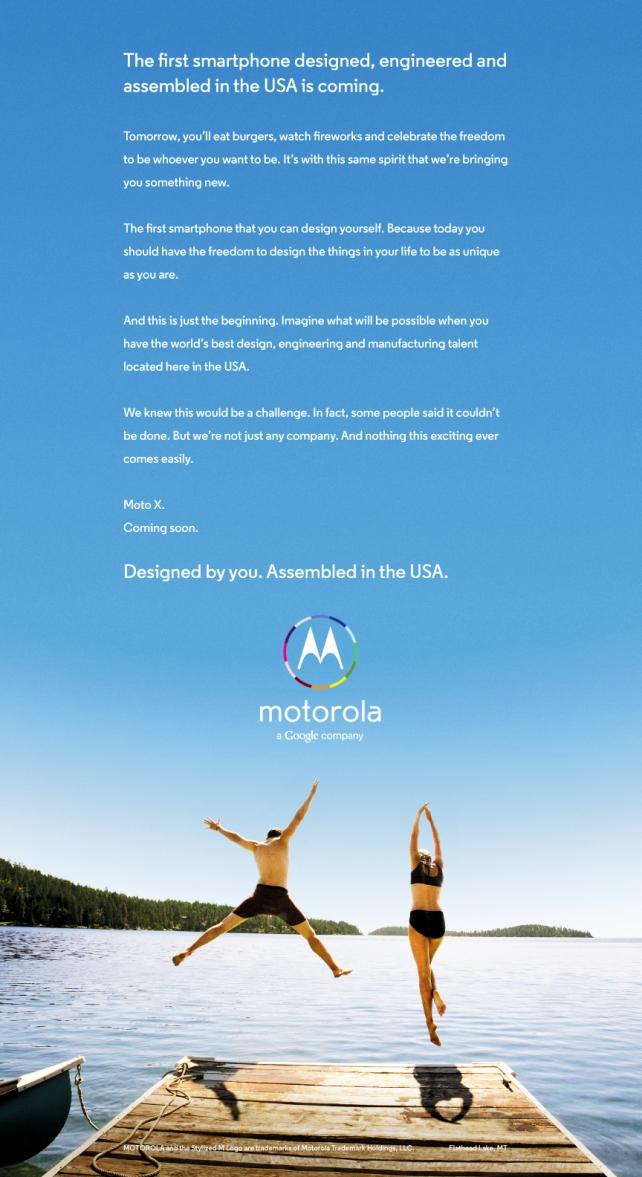