As Motorola celebrates 44 years of pioneering cellphones, the company may have let loose a little secret that we’re not supposed to have seen.

Dr. Martin Cooper led the charge at Motorola back in the 1970’s to get the first cellular phone call by creating the first cell phone ever. That call happened in 1973. 44 years later, we have a pretty damn good rap to celebrate it.

But we also have a little teaser of sorts as the flash frame montage in the beginning of the clip seems to show off the front and back of an unreleased phone that’s believed to be the mid-range Moto X (2017).

The rear design of the Lenovo-made phone seems to agree with prior photo leaks of the device with a characteristic camera hump, but it only contains one sensor, not two as previously depicted. The front of the device seems to be surprisingly conventional as a small fingerprint sensor is placed below the screen and some “Moto” branding. A second unidentified rear render suggests arcing top and bottom edges. 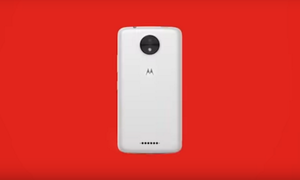 We’re not exactly sure if the continuity break is correct, but of course, we’ll get more details as they will themselves along.

Xiaomi has taken third place in smartphone sales in February. Now we will have to wait and see if Huawei manages to take it back