Seeing one of our favorite phones of 2013 get refreshed instantly piques our interest – especially when the same great features are on-board, and specs have been bumped up to an admirable level. We have a review unit in our labs now, so it’s time to finally find out what happens when you put Motorola up against … itself, in our Moto X 2014 vs Moto X 2013 comparison.

In terms of hardware, there’s a huge upgrade between the two models. We compared them spec-by-spec in an earlier post on the site, so check that out if you want to know exactly what’s different, but upgrades have been made across the board. The new Qualcomm Snapdragon 801 is leagues ahead of the previous Moto X’s Snapdragon S4 Pro on-paper, but if you ask us, both are wonderful performers in the Android world.

Moving on to how exactly that hardware looks and feels, the thinking of Motorola’s designers has changed a slight bit between these two generations. Where the Moto X 2013 had an understated design in almost every respect (unless you went with a wacky Moto Maker custom setup), the Moto X 2014 feels a tad bit more sophisticated. The dimensions – all except the thickness – have been enlarged, and aluminum has been used on the phone’s sides. Talking about Moto Maker again, there’s now an option to purchase genuine Horween leather for the backplate of your custom X, and all of last year’s customizations have been retained. 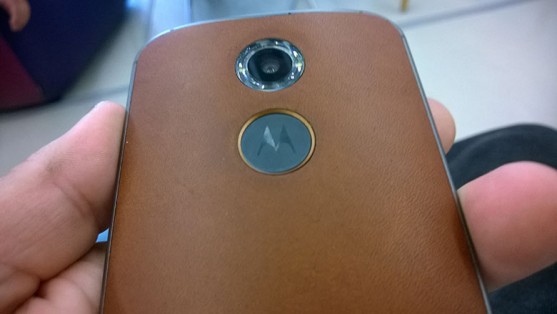 Software is much the same as last year, with improvements in what seem to be all the right places. There are four IR sensors on the front of the phone (they stick out like a sore thumb on white faceplates) for snoozing alarms, silencing ringers, and triggering Moto Display (the renamed Active Display). And other features like Moto Voice (Touchless Control, rebranded) are all still present, and better than ever before.

All of that is laid out for you, along with our thoughts on the camera (a big pain point with last year’s X) and performance, in the embedded video. Be sure to follow us across all of your favorite social networks and subscribe to us on YouTube in order to ensure that you’ll be alerted when our in-depth review of the new Moto X lands next week.