Today Motorola announces three new G-series phones ranging in price from $199 to $299. They’ve got all the features most normal smartphone users might need and there’s even one with excessive battery life.
Published 07 February 2019, 08:00 ESTUpdated 08 February 2019, 17:06 EST

The Moto G series has been successful in providing many features that are normally expected in more-expensive high-end phones while keeping the pricing reasonable and the seventh generation is no exception. All three of the new G7 models come with Android 9 Pie and a Qualcomm Snapdragon 632 processor with 1.8GHz octa-core CPU and Adreno 506 GPU, so all of them should be pretty similar in terms of performance.

All of them have a fingerprint scanner integrated with the Motorola logo on the back which is a nice touch, and… nicely, all 3 have a P2i nano coating for water repellence. They’ve all got an FM radio built in along with those 3.5mm headset jacks that we all love as well. None of these devices have wireless charging or NFC though, so that’s a bummer. 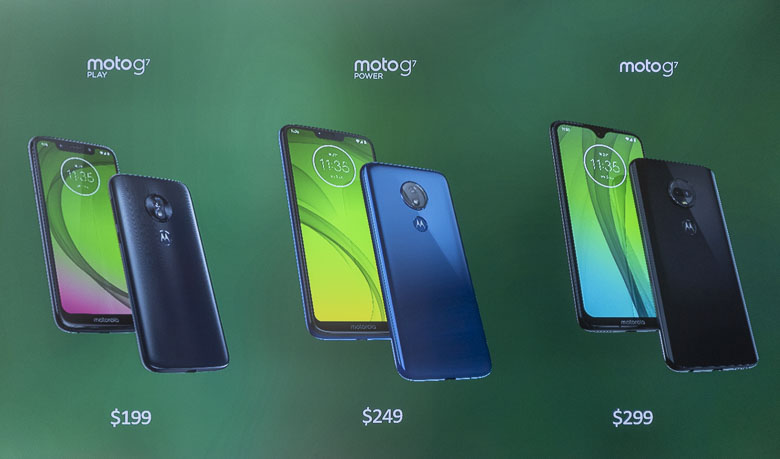 The G7 Play is the most budget-friendly of the three new Motorola G7 smartphones. This one is going to start at $199 in the United States. Motorola calls this a compact design, even though it has a 5.7-inch screen which was considered huge a decade ago. The G7 Play is also the lightest of the trio at only 151 grams. It only has 2GB of RAM and 32GB of storage, but it does support a microSD card for storage expansion. 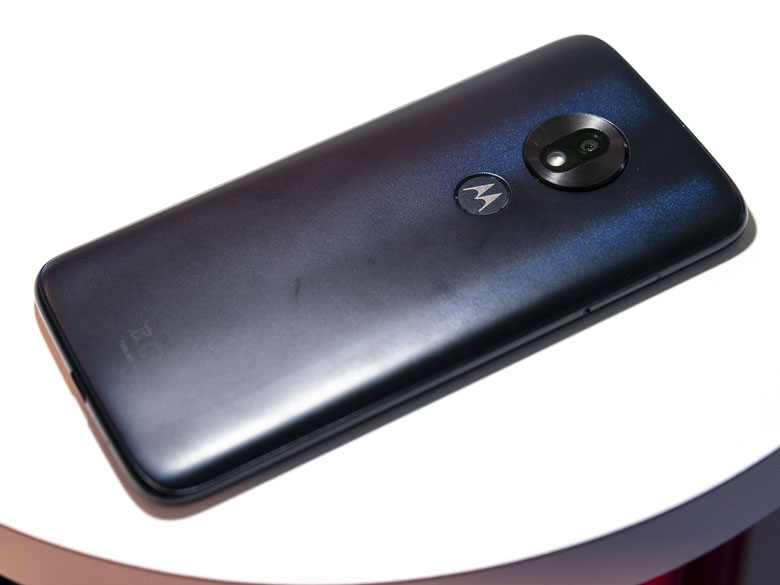 The G7 Play is available in Starry Black and Deep Indigo. You’ve got to get the light just right to see the nice color in the backing. The rear camera is 13 megapixels with an f/2.0 aperture, LED flash, and 1.12μm pixel sensor. There’s a 3,000mAh battery in there, too, and it’s non-removable. The G7 Play also does not support Motorola’s TurboPower charging. 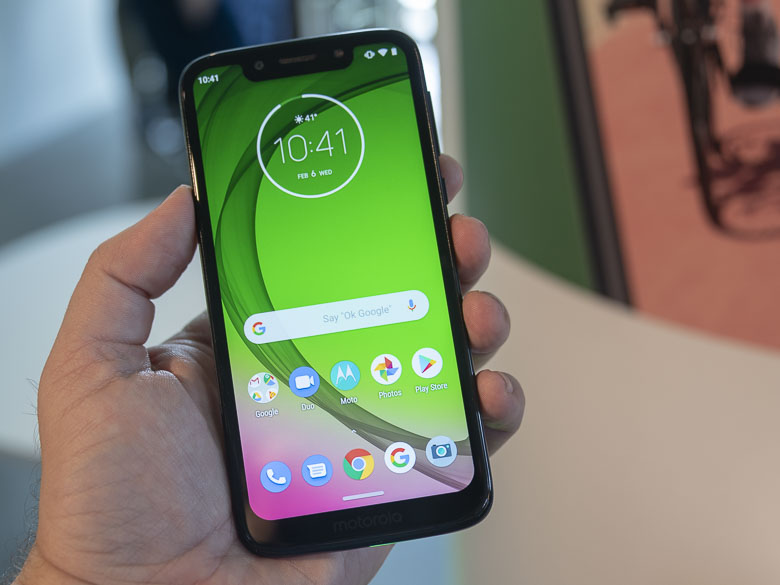 The G7 Play does have a big notch on the top and the bezels aren’t as thin as you might see on more expensive phones, but who cares? That gives you more room to add a good case!

The screen only has a resolution of 720 x 1512, but the lower-quality screen probably won’t be terribly noticeable unless you’re holding it next to a much more expensive phone.  The front facing camera is 8 megapixels with 1.12μm pixels and it also has a selfie flash in that notch there.

The new Moto G7 Play will be released in the U.S. starting this spring with subsequent availability at Boost Mobile, Virgin Mobile, U.S. Cellular, Republic Wireless and Ting, and will be universally unlocked at Best Buy, B&H Photo, Walmart and on Amazon.com.

The Moto G7 Power is called the “Power” because of its huge battery.  Yeah, it’s got a ridiculous 5,000mAh battery! That’ll probably last you about 3 days.

I know that’s not as good as the really old cellphones that would last a month on one battery, but it’s a lot better than most smartphones we have these days. If you’re all about going away on weekend adventures, this might be the phone for you. 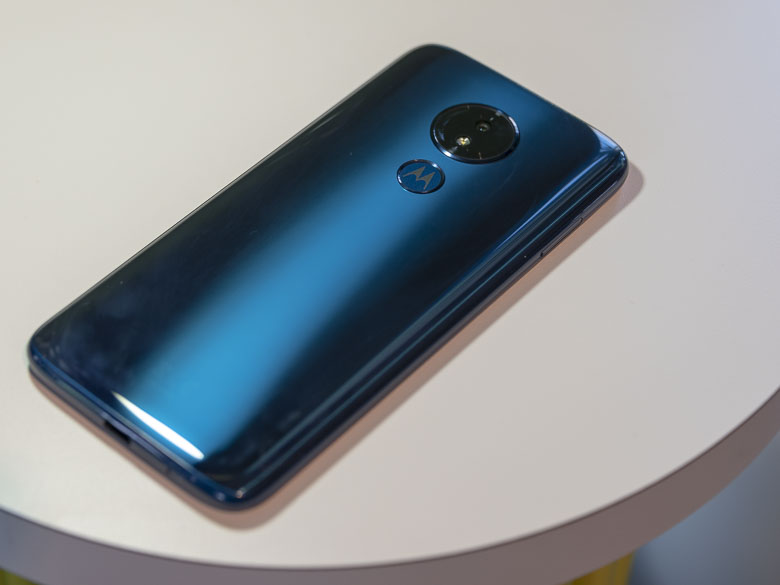 The “Marine Blue” color of the Motorola G7 Power looks great! This one ups the RAM from the 2GB on the G7 Play to 3GB and keeps the same 32GB of storage with expansion options via microSD cards. It’s also a bit heavier at 198 grams. This one also supports TurboPower charging though where you can get 9 hours of usage after 15 minutes of charging. You’ve also got a 12-megapixel camera with 1.25μm pixels and an LED flash. 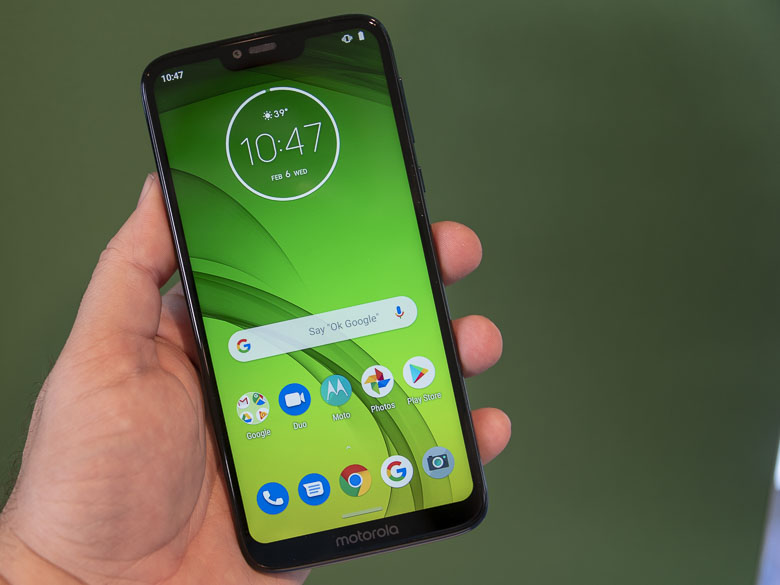 On the front, you’ll notice the notch is narrower than the G7 Play, but it’s still pretty prominent. The display is 6.2 inches with 720 x 1520 resolution.

The new Moto G7 Power will be released in the U.S. starting this spring with subsequent availability at T-Mobile, Metro by T-Mobile, Verizon Wireless, Cricket Wireless (as the moto g7 supra), Consumer Cellular, Republic Wireless, Ting and Xfinity Mobile, and will be universally unlocked at Best Buy, B&H Photo, Walmart and on Amazon.com.

The Moto G7 is the flagship of the G series — at least here in the United States — at the highest price point for the range of a still very reasonable $299.

It does not have as much battery capacity as the G7 Power though — this one backs down to 3,000mAh, but it does include 15-watt TurboPower support like the G7 Power. The G7 does take the RAM to 4GB and the storage capacity to 64GB with expansion via microSD card slot. It weighs in at 172 grams. 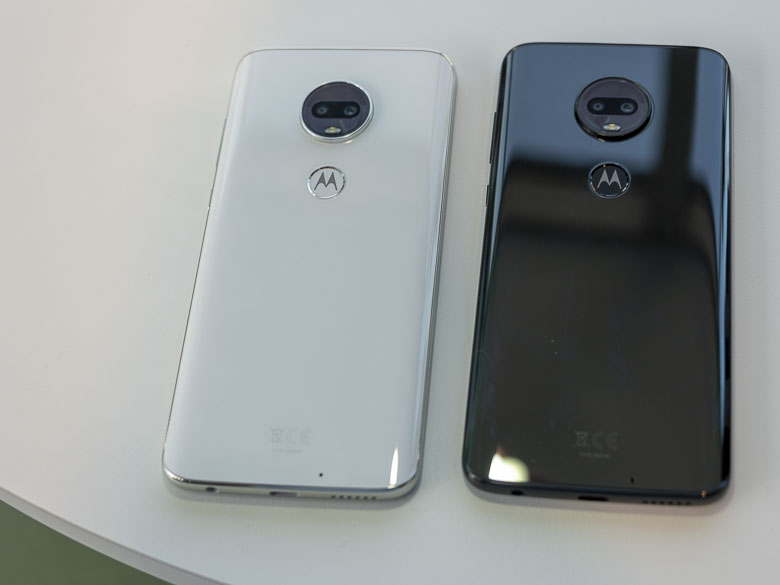 You can get the G7 in Ceramic Black or Clear White colors. The white one has nice shiny chrome edges too, so that one looks great. We’ve also got a 12-megapixel camera on the back with 1.25μm pixel sizes and an f/1.8 aperture. There’s also a second camera which is only 5 megapixels and is only used as a depth sensor for those chintzy background blur filters that try to simulate narrow depth-of-field but never really succeed in doing it right… at least that’s what I have to say. 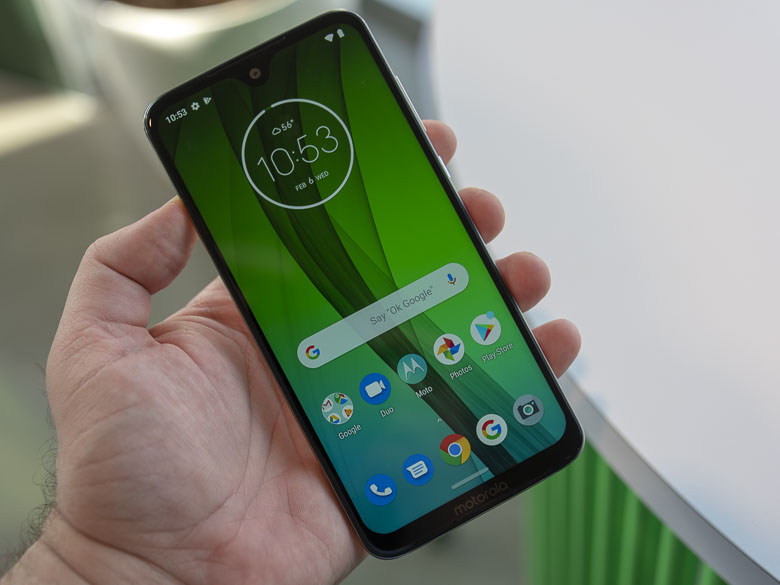 The screen on the G7 is 6.2 inches, like the G7 Power, but it’s got a higher resolution of 1080 x 2270 — that will give you 403 pixels per inch which is a third more than a normal human eye needs to see smooth imagery, so it should look pretty good. You’ve also got an 8-megapixel front-facing camera with a screen flash and the notch at the top of this one is the least obtrusive of the three devices. 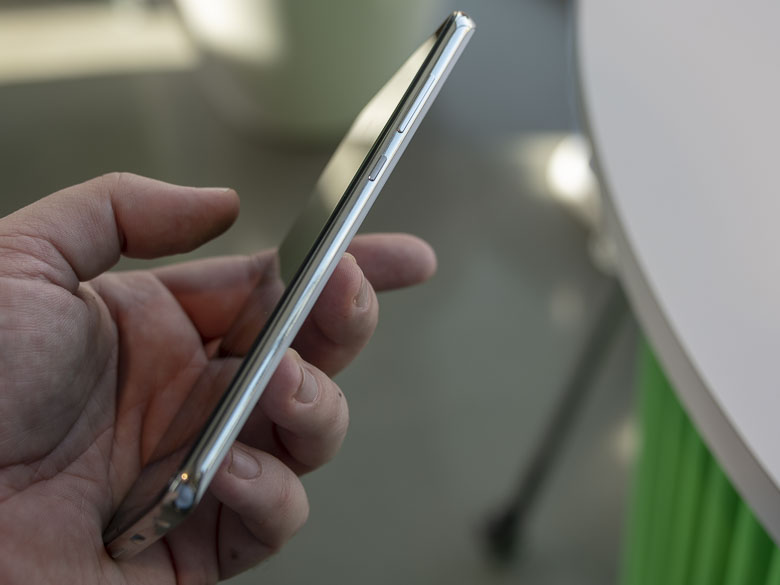 The G7 is the thinnest of the three at 8mm and here’s a good look at the cool chrome edges of the white version.

There will also be a Moto G7 Plus model with two 16-megapixel cameras for about €300 in Europe, Australia, Brazil, and Mexico. The G7 will be released in the US starting this spring and will be universally unlocked at Best Buy, B&H Photo, Walmart and on Amazon.com with subsequent availability at Google Fi, Republic Wireless and Ting.

Stay tuned for more coverage on these mid-rangers from Pocketnow!

Adam has had interests in combining technology with art since his first use of a Koala pad on an Apple computer. He currently has a day job as a graphic designer, photographer, systems administrator and web developer at a small design firm in Westchester, NY. His love of technology extends to software development companies who have often implemented his ideas for usability and feature enhancements. Mobile computing has become a necessity for Adam since his first Uniden UniPro PC100 in 1998. He has been reviewing and writing about smartphones for Pocketnow.com since they first appeared on the market in 2002. Read more about Adam Lein!