Hot on the heels of the G6 Play, the non-Play and non-Plus Moto G6 has also been benchmarked already running Android 8.0 Oreo, as well as packing a Snapdragon 625 processor.

While a number of recent deals have made the MWC 2017-unveiled Moto G5 and G5 Plus appeal to Android bargain hunters again, it might also be wise to wait for G6, G6 Plus and G6 Play announcements.

These are unlikely to go down in Barcelona at the 2018 Mobile World Congress, but seeing as how the second of three variants has already been benchmarked running Android 8.0 Oreo, the mid-range family’s launch may not be too far away either.

Rendered with radically redesigned exteriors, inspired by the higher-end Moto X4, the “regular” Moto G6 and G6 Plus were also expected last month to pack Snapdragon 450 and 630 processing power respectively. 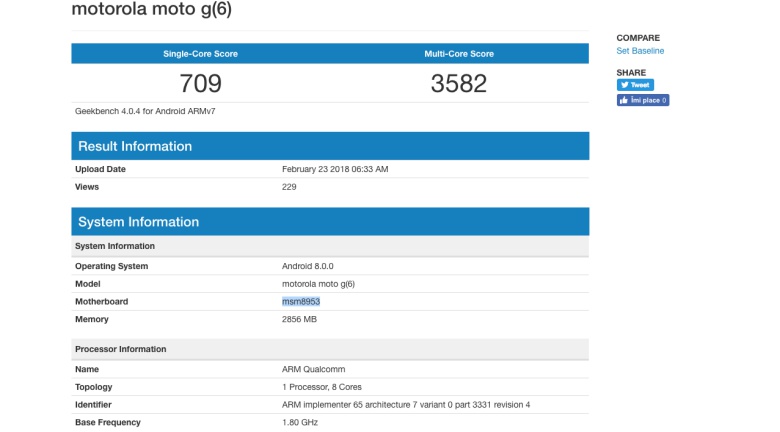 But now it seems far more likely the G6, codenamed Blaine, will actually come with a Snapdragon 625 SoC in tow, while the G6 Play, aka “Ashley”, is tipped to settle for a modest SD430 “mobile platform.”

We’re not sure where all that leaves the G6 Plus, but perhaps Geekbench will help solve the trio’s last remaining mystery as well before long. The benchmarking database lists the non-Plus and non-Play Moto G6 version with 3GB RAM in addition to an msm8953 “motherboard”, which is the same memory count revealed for the G6 Play. But we’re guessing there will be multiple RAM/ROM configurations, possibly including a 4 gig memory-packing Moto G6.