Import-export database Zauba has picked up on some components destined for a phone named “Athene,” known to the rest of us for now as the Moto G4.

It feels kinda uncomfortable using the “Moto G4” moniker, given that Motorola typically goes for the “Xth Gen.” suffix on the back of new Moto G offerings, but it’s good enough for a shorthand when blathering on about it.

A bigger name game comes down to its internal codename, speculated to be “Athene”. Quite a few components for said Athene smartphone have made their ways through India in the past month-plus and the site Moto G — yes, a whole site named for the Motorola mid-ranger — picked up on these listings. 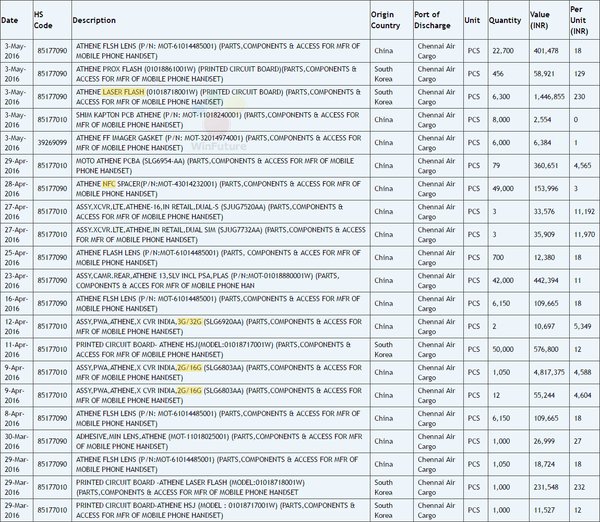 The highlights include memory options of 2GB RAM and 16GB of storage and a 3/32 split. We’re also inferring that a lower-end Moto G would have a 13-megapixel main sensor while the more powerful one gets a 16-megapixel sensor with laser-assisted autofocus. Selfie-wise, there’s a 5-megapixel unit with pixels 1.4μm big. For what it’s worth, that sensor’s sourced from California-based OmniVision.

The emphasis has been on India for a device launch on May 17. It wouldn’t be too surprising if this entire phone gets a Make in India treatment.