It may look premium, based on a few previously leaked renders, but the fast-approaching Moto E5 Plus will be decidedly humble on the SoC and memory side.

For the first time in the low-end smartphone family’s history, the Moto E will reportedly get three main variants this year, including a no doubt dirt-cheap E5 Play expected out with prepaid plans on Verizon and Cricket Wireless. But today we’re turning our attention to the Moto E5 Plus, which may or may not be officially unveiled alongside the G6, G6 Plus and G6 Play next week.

Probably not, although its launch should be right around the corner either way, since the E4 and E4 Plus saw daylight almost a year ago. Already rendered a couple of times in crisp quality, the budget-friendly handset seemingly packs a quad-core Snapdragon 430 processor and 3GB RAM. That’s a decidedly modest SoC/memory combination, but last year’s E4 Plus was hardly faster or better for heavy multitasking, with the same 3 gig RAM count on deck, and an even humbler MediaTek MT6737 chipset. 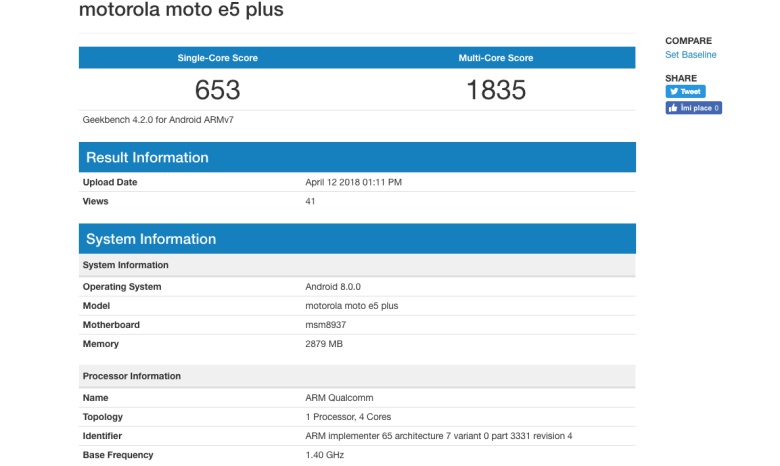 Like the E4 Plus, we should probably expect the Moto E5 Plus to shine in the battery capacity department, circling the 5000mAh magic number once again, although that’s obviously not something we can confirm with a pre-release Geekbench performance-measuring visit. The only other thing the preliminary benchmark reveals is that the E5 Plus already runs Android 8.0 Oreo on the software side.

Previous speculation was unclear on the phone’s screen size and aspect ratio, with either HD or HD+ resolution in tow, alongside a single 16MP rear-facing camera, 8MP selfie shooter, and up to 64GB internal storage space.