The second-gen Moto E Android 5.1 update has begun rolling out to devices, with both the updated Android version and several other changes in tow.

If there’s one thing you generally don’t expect when you’re buying cheap phones, it’s that you’ll be receiving fast updates to the latest versions of the device’s operating system. Well, that’s not the case with Motorola, as its budget-friendly Moto E has been receiving updates that rival even Nexus devices in speed. Today, the Moto E Android 5.1 update has begun its rollout to all users of the second-gen model of the smartphone.

Because of the fact that the Moto E is an unlocked smartphone offered off-contract, all owners of the device should be currently seeing an available update. For our review unit, the update came in as version number 23.11.15.en.US. The update takes approximately 15 minutes, and brings your device to Android 5.1 Lollipop (with the various bug and stability fixes Google ships with the update included). Motorola notes additionally in the changelog – which you can see below – that the update will also bring better notification control, as well as device protection to keep your phone safe and locked in the event of a theft.

We’ve been using the updated software for a few minutes on our Moto E now, and while there’s no significant difference, it’s definitely worth grabbing the update if you’re a Moto E owner. 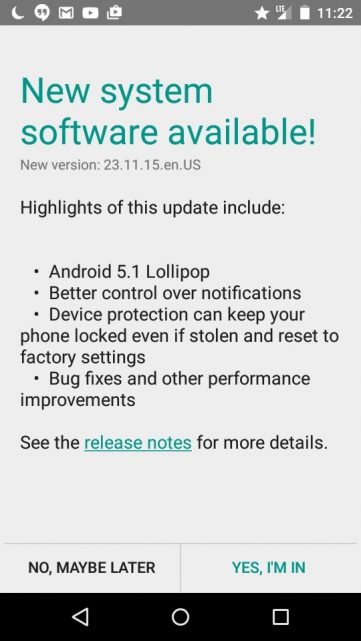