The Moto 360 “flat tire” may look like it’s wasting screen space, but a Motorola leak suggests things are actually working the other way around.

The launch of the new Moto 360 appears to be just within reach, but from the myriad ways the smartwatch has managed to already leak, revealing not only two watch sizes but also a ruggedized 360 Sport option, in some ways it may as well have already gone official. From what we’ve already seen, the new Moto 360 doesn’t appear to be a huge departure from last year’s design, and a lot of the wearable’s iconic styling makes a return. That means not only another circular display (this is a smartwatch called the “360,” after all), but also the same bottom-clipped “flat tire” look that so many users took issue with last year. How will Motorola rationalize its return? We may not have the full picture just yet, but a new leak sure suggests that Motorola thinks consumers will overlook a little display occlusion if that means getting one of the best screen-to-watch-body ratios around.

The image you see up top (original below) comes from a slide apparently part of an internal Motorola presentation, and while we can’t positively identify the wireframe 360 in question as this year’s or last year’s, Motorola’s point remains: even with that clipped screen, the Moto 360 still offers comparatively more screen real estate than its peers.

Then again, we’ve heard the valid criticism that this comparison seems to be missing some key models, and maybe the Moto 360 wouldn’t look as great when compared to other modern round-screen smartwatches like the Huawei Watch – to say nothing of Samsung’s Gear S2 – but we imagine it would still manage to hold its own.

Have you learned to live with Motorola’s flat tire, especially if that lets Motorola bring us a smartwatch with such a face-filling display, or does it still irk you that the screen falls short of being a perfect circle? 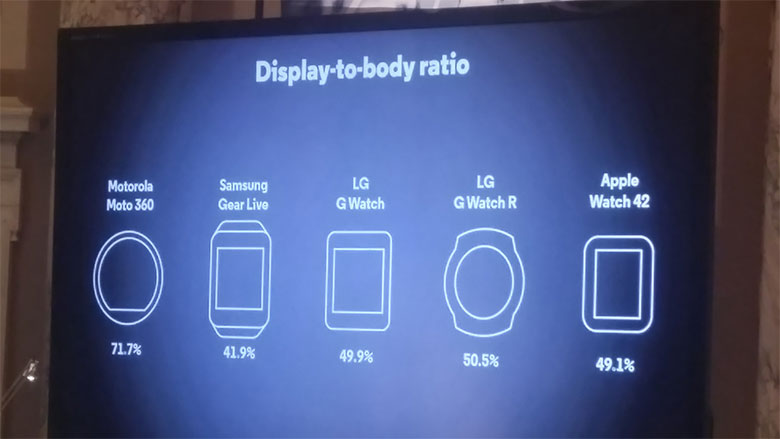