The early-year design stage has been rendered by Taiwanese subcontractor Catcher and has been picked up by Steve Hemmerstoffer of @OnLeaks.
Published 11 May 2016, 13:19 EDT

We now have a clearer idea of what the next iPhones looked like — in the minds of designers — earlier this year.

NowhereElse.fr‘s Steve Hemmerstoffer is back at it, this time leaking more computer-aided design renders of both the iPhone 7 and iPhone 7 Plus. The renders are supposedly from Taiwanese design subcontractor Catcher and reflect Apple’s blueprints from January. UK site uSwitch commissioned Hemmerstoffer for publication.

Regarding the regular iPhone 7, we can see a protruded camera port that has been seen in other Catcher leaks as provided by Hemmerstoffer. An anonymously-sourced picture of an iPhone 7 dummy unit that was sent to MacRumors this week showed off a flat-cut camera port.

What both the dummy leak and the current leak share, though, is the lack of a 3.5mm audio port on the phone. The bottom side of the phone just has a single speaker, a Lightning port and space to spare. While hopes of a dual-speaker setup remain slim, renewed discussion about Apple going on to keep the headphone jack in its phones has popped up in the past week. 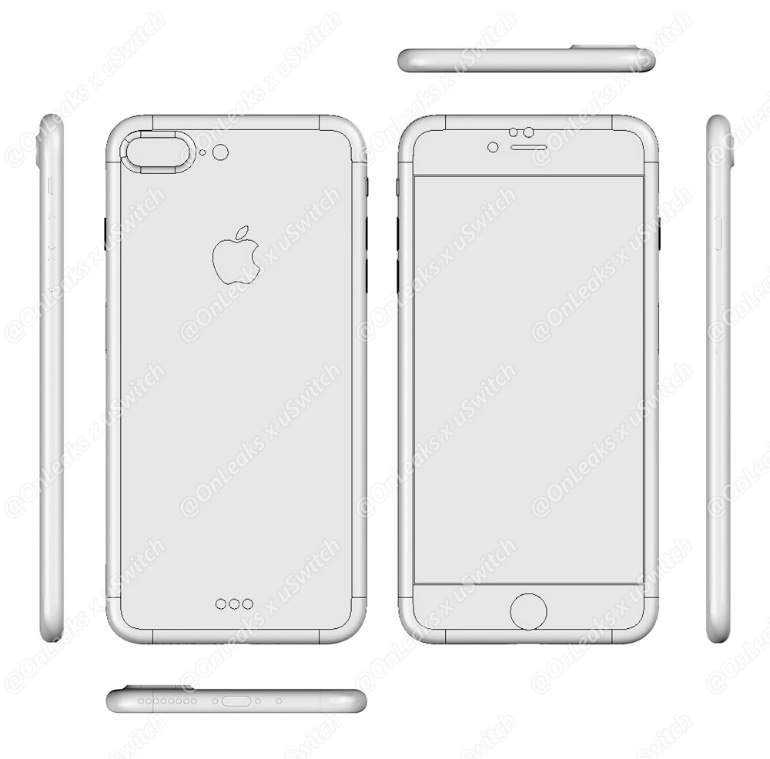 On the iPhone 7 Plus render, there’s been no change made to the design of the wide and bulging camera port that is suspected to house a dual-camera module. There’s no headphone jack on the bottom, but there are Smart Connector pins on the back, something that’s been discussed as a possibility. Contrast that with a recent rebuff from Macotakara that the feature, found on the recent iPad Pros, would not actually make it to the device which has also been dubbed the “iPhone [7] Pro”.

uSwitch is assured that the antenna line designs for both phones — hugging the top and bottom edges of the rear — remain the same as rumored. Both phones should also keep their dimensions from last year.

We know this has been a flood of information that seems to have come out at once, but remember that we’re dealing with breadcrumbs from different points along the research and development timeline. Again, these renders reflect what engineers at Apple thought of back in January.

If Apple hasn’t started putting in orders for mass production already, it should be soon.

Bottom line, the Samsung Galaxy S21 wins. Those in the market for the best bang for the buck modern flagship, this is it, not the iPhone 12.
YouTube 1.8M
Facebook 570K
Twitter 197K
Instagram 133K
RSS