It’s unclear what are the “challenges” holding back unlocked US Galaxy S7 versions, but “soon” enough, you should start receiving monthly security patches.
Published 15 March 2017, 11:53 EDT

While many die-hard Samsung fans have been willing to cut the chaebol some slack for delays in Galaxy S6 and S6 Edge Nougat updates, seeing as how it’s currently all hands on deck to get the S8 out safely to prospective customers worldwide, GS7 software support holdups are simply inexcusable.

We’re talking long waits for international Galaxy S7 and S7 Edge versions to move up to Android 7.0, longer ones for US carrier-specific models, and a complete absence of activity as far as unlocked SKUs are concerned stateside.

Those of you who didn’t fall for the implied promise of minimal bloatware and more frequent maintenance updates may not know this, but the slightly overpriced officially unlocked S7 and S7 Edge launched on American shores back in June still run Marshmallow, with an obsolete December 2016 security patch level. 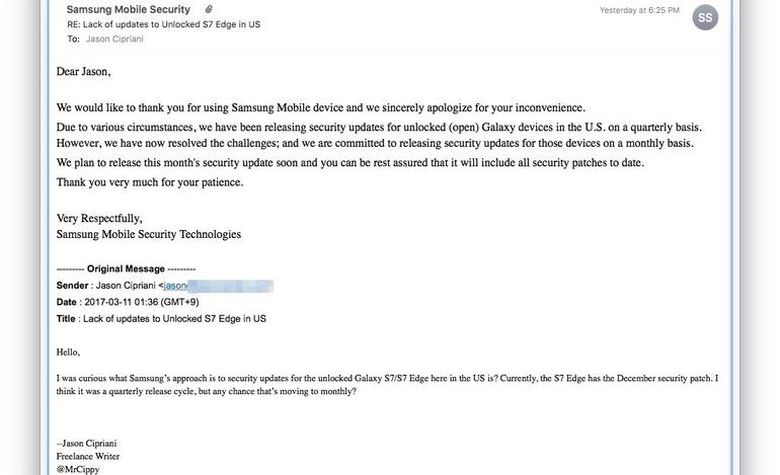 Apparently, Samsung had the two on a quarterly update schedule so far “due to various circumstances”, though the company’s Mobile Security Technologies division feels confident all “challenges” are now resolved, “committing to releasing security updates for those devices on a monthly basis”… again.

Let’s hope the new pledge will be taken seriously this time around, with March security fixes coming “soon.” No official word on Nougat promotions for a couple of phones discounted to a still-extravagant $570 and $670 respectively by Best Buy, but common sense dictates a simultaneous rollout in a matter of weeks, or maybe mere days. Fingers crossed for this nightmare to end already.