If a puny little stylus just ain’t your speed, you’ll want to take a look at the luxurious new Montblanc Note 4 stylus alternatives.

New phones, tablets, and wearables are only half the fun of the product launches we see at events like IFA 2014, and beyond the big-ticket items themselves, we inevitably learn of dozens of new accessories tailored specifically for these models. Today’s announcements have already delivered a nice assortment of add-ons, and with Samsung’s Unpacked 2 event still fresh in our mind, we wanted to touch upon one of the classiest accessories to arrive so far, the special Montblanc stylus lineup for the Galaxy Note 4 and Galaxy Note Edge.

Samsung’s S Pen stylus is already incredibly functional, and the sensitivity improvements the manufacturer has made to the Note 4’s digitizer panel promise to push the user experience we’re familiar with from previous Note models to the next level, better supporting input from multiple angles, for instance. But the S Pen isn’t the only game in town when it comes to interacting with the Note 4’s screen, and during today’s launch Samsung introduced us to the new e-StarWalker and Pix stylus pens from Montblanc.

While neither model offers features that expand beyond what the S Pen itself delivers, they both sure look a hell of a lot more impressive than the diminutive-by-comparison S Pen, and their much thicker construction could be a big benefit to users who struggle to comfortably use the Note 4’s default stylus. Of course, that means you lose the benefit of being able to easily stow the pen away within the phone itself, but when it looks this nice, maybe you won’t mind having to lug it around separately.

What’s the catch? Money, and lots of it. While a replacement S Pen from Samsung might set you back thirty dollars, these Montblanc options are priced an order of magnitude higher. The Pix sells for $350, and the e-StarWalker $525 – and both those prices appear to be contingent on the exchange of existing Montblanc hardware. As such, this is hardly going to be an accessory for everyone, but if you’re looking for a luxury twist to put on your bleeding-edge phablet hardware, this could be just the ticket.

In addition to the pens, Montblanc also offers a pair of $245 leather Note 4 covers. 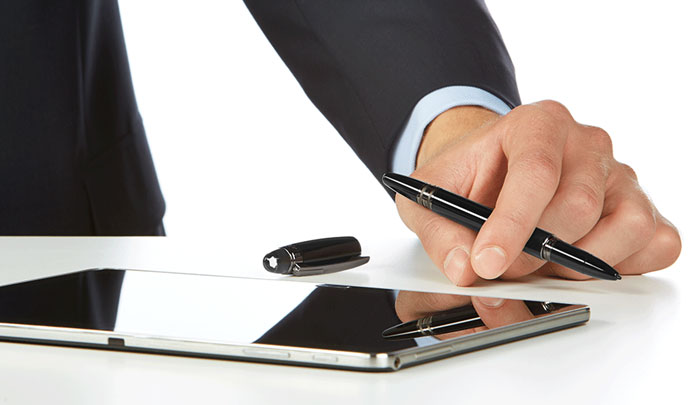