Samsung is gearing up to redefine the smartphone market’s mid-range standards again, with a Galaxy A7 (2018) seemingly packing 6GB RAM.
Published 26 October 2017, 09:49 EDT

While nowhere near as eye-catching as the ultra-high-end Galaxy S8, S8+ and Note 8, the upcoming Galaxy A5 (2018) and A7 (2018) are expected to redefine Samsung’s mid-range standards across a number of departments.

Now, it’s unclear if Samsung intends to actually bill the Galaxy A7 (2018) and A5 (2018) as “Infinity Display” continuators, but either way, we’re probably looking at slightly thicker “foreheads” and “chins” here than the company’s legit flagships.

Under the hood, the smaller model was revealed to pack a respectable Snapdragon 660 SoC and whopping 6GB RAM in a benchmark listing from August. Geekbench today confirms the latter is also true for a not-so-mysterious SM-A730F, which most likely designates the 2018 edition of the Galaxy A7. 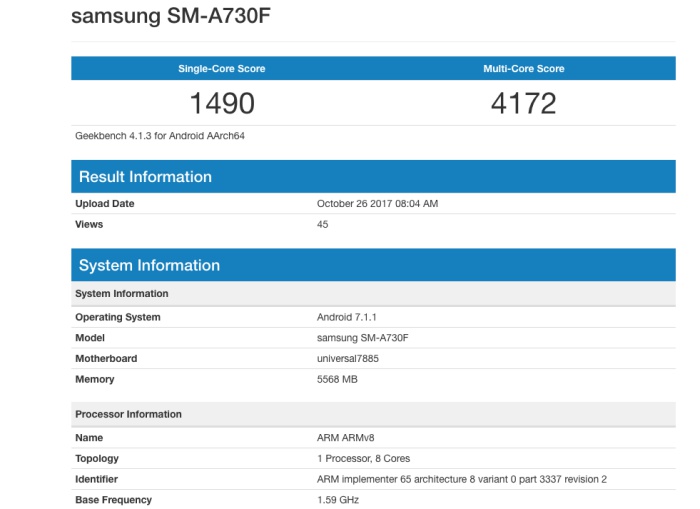 That’s because the 2017 variant was known as the SM-A720F for performance-measuring purposes, whereas the Galaxy A5 (2018) paid Geekbench that revealing visit a couple of months ago with an SM-A5300 model number.

It’s entirely possible different configurations of the next-gen A5 and A7 will roll out in different regions with a few distinctions in specs, alternatively offering 4 and 6 gigs of memory, as well as Snapdragon 660 and Exynos 7885 processing power.

But even if only one market receives 6GB RAM versions at reasonable prices, that’s definitely something to look forward to. Too bad Android 7.1.1 Nougat runs the Galaxy A7 (2018) software show this close to its probable commercial launch.

There is no official information when the rollable LG phone will arrive or how much it will cost, but rumors point to a H1 2021 debut.