The LG Q7, Q7+ and Q7α are set to begin their global rollouts in Europe early next month at unspecified prices, with modern designs and a great number of “premium” features in tow.

Back when the respectable LG Q6 was unveiled, 2:1 mid-range smartphones with modern designs and (certain) premium features were pretty rare birds. Nowadays, essentially every company has at least a few of them battling to capture the attention of bargain hunters worldwide, but that doesn’t mean you shouldn’t give the LG Q7 a chance as well.

The “thin-bezeled” body of the new 5.5-incher is not very different from its predecessor, although this time, you get both a metal frame and metal backplate for an extra touch of style and, hopefully, durability.

With no distracting notch, the FHD+ “FullVision” screen is surrounded by relatively thin bezels, which means the Q7 basically matches the Q6’s dimensions, at 143.8 x 69.3 x 8.4mm. The 145 grams weight is also quite similar, and unsurprisingly, the 3,000mAh battery capacity has gone unchanged.

The LG Q7 does shift the position of the rear-facing camera, adding a conveniently located fingerprint sensor into the mix. That’s actually part of a “Smart Rear Key” setup you can also use to quickly snap photos, take screenshots and control the notification bar. 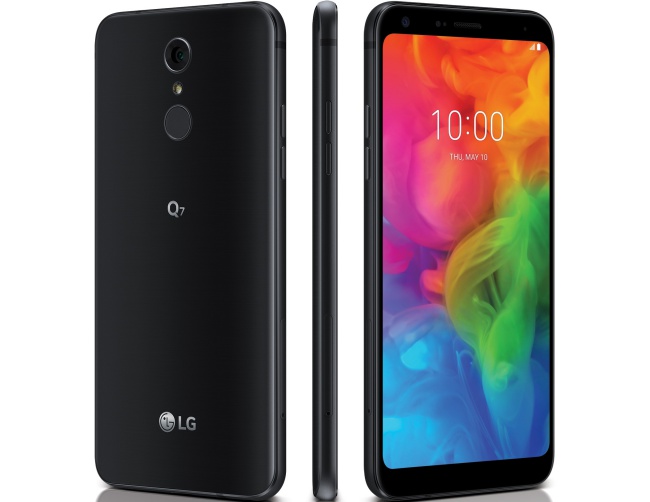 Other “premium” features “typically found in more expensive flagship smartphones” you can get from the Q7 on a tight budget include AI-based QLens support, Hi-Fi quality audio, DTS:X 3D Surround Sound, as well as water and dust resistance.

Depending on your “region and market”, you may soon be able to buy one or several Q7 variants. The Q7+ is the only Quad DAC-equipped configuration, also packing 4GB RAM and 64GB internal storage, while the “regular” Q7 and the Q7α both settle for half that local digital hoarding room and 3 gigs of memory.

The Q7alpha will be available exclusively in a Moroccan Blue flavor, with a 5MP selfie shooter and 13MP rear-facing camera, while the Q7 and Q7+ are set to offer a choice between 5 and 8MP front snappers, with color options including Moroccan Blue, Aurora Black and Lavender Violet. The Q7 Plus also upgrades the main PDAF cam to 16MP, with all three versions running Android 8.0 Oreo out the box starting “early next month” in “key markets in Europe”, followed by “countries in the Americas and Asia.” No words on pricing yet.