The sequel to the successful low-cost Honor 6X launched globally early this year is predictably coming to China first in a couple of weeks.

We don’t talk much about mid-range Honor smartphones celeased in China, as most of them tend to stay exclusive to their parent company’s homeland or at best go largely unnoticed in the few Western territories they do reach. But the impending 7X may well be special.

Slated to make its formal debut in the world’s largest smartphone market almost one full year after the Honor 6X’s regional announcement, this could follow in its predecessor’s footsteps when it comes to a European and US expansion too. 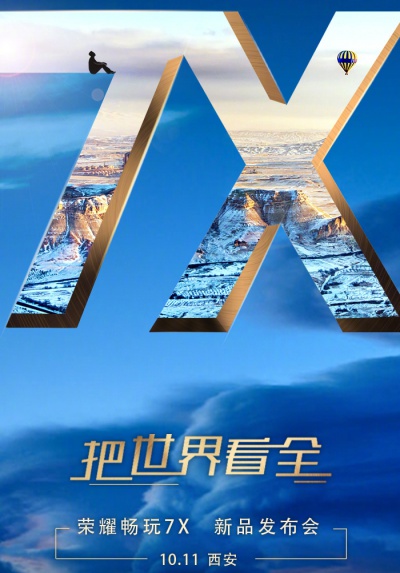 Unfortunately, we don’t know a great deal (for certain, at least) about the sequel to one of the most compelling sub-$200 value propositions around in terms of actual specs and features. Since the Honor 6X is extremely similar to Huawei’s own-brand Mate 9 Lite, a strong Maimang 6 and Mate 10 Lite resemblance feels like a definite possibility.

Then again, credible recent rumors have called for the Honor 7X retaining its forerunner’s 5.5-inch Full HD display rather than going up to the Maimang 6’s FHD+ “FullView” panel.

For its part, the company’s official October 11 teaser image lacks any obvious hints aside from the crystal clear 7X moniker, while the accompanying text includes cryptic references to a “high” and “wide” field of view. No prizes for guessing an improved dual camera setup is in the pipeline, but an extra-wide aspect ratio with thin screen bezels is also possible.