Find out just what Microsoft had to say about Windows Phone 8 at today’s launch event.
Published 29 October 2012, 14:17 EDT

Out on the West Coast, the specter of Hurricane Sandy hasn’t threatened Microsoft’s plans, letting it go ahead with its Windows Phone 8 launch event.

Microsoft’s Joe Belfiore took the stage, starting things off by highlighting the differences in the company’s philosophy towards smartphone platform design compared to Apple or Google. For Microsoft, so he claims, it’s not about having the most apps, it’s about making it easier for people to connect with other people. As the company put it in its own video spot, “we’re not for everybody; we’re for the individual”.

You’ve heard about Live Tiles before, and now Microsoft is talking “Live Apps”. That means better integration across the platform, especially when it comes to the lock screen. Such apps will bring the latest info, uploads, and news to your lock screen. Microsoft showed-off how Facebook’s app works, giving you options like pulling up a random photo from your account to display on your lock screen when you wake the phone. 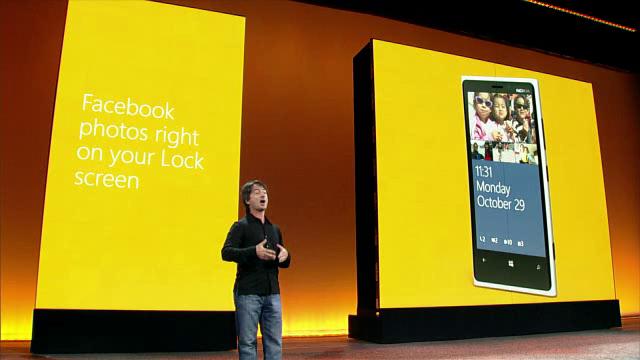 Of course, Facebook’s not the only app getting the special WP8 treatment, with new Twitter and Skype releases arriving, as well. Skype, in particular, will be tightly integrated with the operating system, letting you receive Skype calls like any other phone call, and without keeping the battery-draining app constantly running tin the background.

Windows Phone users have always gotten the short end of the stick when it comes to high-profile apps, but Microsoft is hoping to change that. It says that 46 of the 50 most popular apps from other platforms will be coming to WP8. That number includes Pandora, arriving in early 2013. Microsoft’s hoping to draw attention to that launch by giving Windows Phone users a year of ad-free Pandora service.

Data Sense will be helping you cut down on cellular data usage, compressing web data for browsing sessions, locating open WiFi access points, and adjusting how aggressively it helps you save data based on how much is left on your tier throughout the month. The web compression could lead to users being able to visit a claimed 45% more pages each month with the same data usage. Support will be carrier-dependent, with Verizon being the first to offer it. 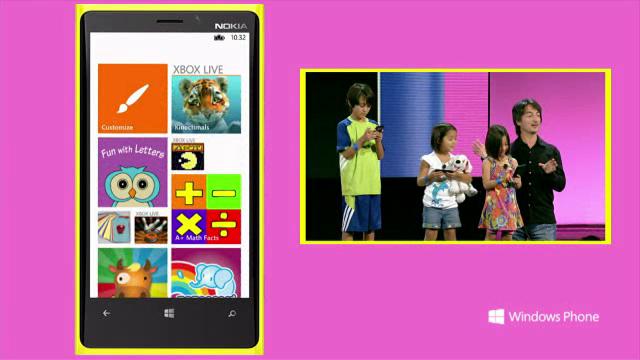 Kids love playing with smartphones, but adults need to make sure they’re able to do so safely. To that end, Microsoft is introducing its Kid’s Corner parental control feature. Parents can select which specific apps kids will be able to access with the feature enabled, preventing them from accessing the browser or apps that may be too mature for them.

We spotted Jessica Alba rocking a Lumia 920 last week, and she popped-up today at Microsoft’s event, to help the company talk about Kids Corner. Alba had some problems in the past with her kids posting to her Twitter feed, and now she can use Kids Corner to prevent a repeat of that kind of event.

The People hub now supports “rooms”, letting you create subsets of friends or family members for limiting the size of the group you interact with. You can use this to share somewhat private info that you’d rather not all your friends getting access to.

Unsurprisingly, Microsoft is all about WP8 integration with its other product families, tying your Xbox and your PC together with your smartphone. SkyDrive promotes easy cloud sharing between all these disparate devices, making photos and documents available no matter where they were created.

Xbox Music will auto-sync across platforms, letting playlists you create on your PC instantly appear on your WP8 phone linked to the same account.

Steve Ballmer came out to wrap things up, talking some more about Microsoft’s focus on making the platform supremely personalizable, tightly integrated across multiple devices, and having some really high-quality hardware from its OEM partners. The Microsoft pop-up stores we saw erected for Surface sales will be carrying a full assortment of WP8 launch hardware. Ballmer also touched on a heavy Windows Phone 8 marketing campaign, intended to saturate the media with hopes of reaching millions of new users.