Microsoft officially gets the Windows Mixed Reality show on the road

No less than four Windows Mixed Reality headsets have simultaneously been released yesterday, with the Samsung Odyssey next in line.
Published 18 October 2017, 04:27 EDT

In addition to shocking the tech world (in a positive way) with the wholly unexpected announcement of not one, but two Surface Book 2 variants, Microsoft yesterday delivered on a promise from early last month, officially launching both the Windows 10 Fall Creators Update and the first batch of immersive Windows Mixed Reality headsets.

A large number of Redmond’s traditional hardware-making partners have jumped right in to support the Oculus, HTC and Sony-challenging MR initiative, developing head-mounted displays that are perhaps a little too similar and confusing for the end user.

Basically, choosing one of the four headsets up for grabs today is a matter of design preference, as they’re all capable of the same captivating experiences, no hole-drilling into your walls necessary.

You can purchase the unnamed Acer WMR headset and the Dell Visor with or without standard bundled controllers at $299, $399, $349 and $449 respectively. The Lenovo Explorer is only available with included motion controllers, for an affordable grand total of $399, and the complete HP Windows Mixed Reality package sets you back an extra 50 bucks. 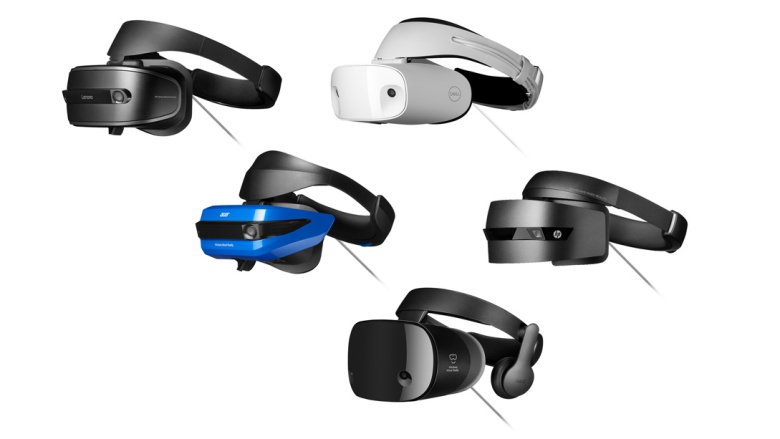 In terms of specifications, the Dell Visor and Lenovo Explorer stand out with a 105 field of view, compared to the other two’s 95 degrees FOV. All four sport LCD screens with 1440 x 1440 resolution per eye, which the Samsung Odyssey marginally upgrades to 1440 x 1600 pixels with OLED technology.

The Odyssey also features built-in premium AKG headphones, costing $499.99 with motion controllers, and shipping from November 10. Then you have the swankiest product of them all, from Asus, with a 3D polygonal design, priced at €449 on the old continent, but only slated for a commercial release next year.

Finally, Fujitsu came a tad late to the party, targeting the always distinctive Japanese market with a fairly generic-looking Windows Mixed Reality headset priced at the rough equivalent of $445, controllers included, and regionally due out in late November. Don’t forget you need compatible PCs to get these bad boys to work, although the minimum requirements aren’t exactly excessive.

There is no word on availability and price yet.

On today’s Pocketnow Daily, we talk about the cameras in the upcoming iPhone 13, Samsung Galaxy Z Flip 3 leaks, and more.