Commercial subscriptions to Office 365 will get the first whack of threaded conversations, bot-integrated chat and a whole bunch of collaboration.

Teamwork is something hard to corroborate in real life. Technology provides us with plenty of liberty to telecommute and telecommunicate with our colleagues. And a lot of those offices in those companies (some 28 out of the FORTUNE 100 companies, actually) use Slack to connect through conversations about projects and places for files associated with said projects. As an independent service, it only brings in a daily active user base of 4 million users.

Microsoft is keen on pushing cloud services these days, so you probably should’ve guessed that it was going to wield a sword over Slack. That sword is called Teams.

The service is available as a preview right now to those with Office 365 commercial subscriptions for all desktop and mobile platforms (including Windows 10 Mobile, Android and iOS) Microsoft serves and is meant to “bring together chat, meeting, notes, Office, Planner, PowerBI, and a host of extensions and applications” to let work be known and shown, according to CEO Satya Nadella. 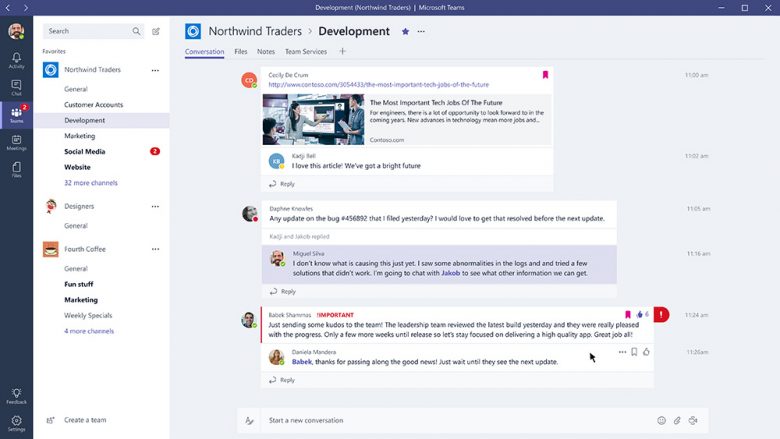 The chat stuff seems pretty standard with threaded convos, all the image, photo, GIF and emoji libraries you need to be witty, options for voice and video and sharing direct views with Microsoft Office docs. From the groups, one-on-one or limited subgroup conversations can be parsed. Tabs keep track of what documents and applications are on the docket. Some third-party apps like Zendesk and Asana can be tabbed. Notifications as served by Exchange can also be served. Microsoft’s Bot Framework is also accessible to help with users’ needs.

Ins and outs of Teams are protected by multifactor authentication and all data is encrypted passing through the system. Security measures will be compliant with standards of the EU and the US government.

Once again, the Microsoft Teams Developer Preview is available in 181 countries and 18 languages right now to the 85 million Office 365 customers right now. An official release is due next quarter.