Microsoft Tablet Rumors: Nook Out, But What About An Xbox Tablet?

Microsoft’s tablet may not be a Windows 8, or even Windows Phone 8 device at all, but one designed for use with a new Xbox system.
Published 18 June 2012, 12:20 EDT

Microsoft’s got a “major announcement” coming out later today, and all the rumors have pointed to it being some sort of tablet-related news. At the end of last week, we talked about some of those, including the possibility that Microsoft could be announcing a tablet of its own, which might feature some connection to Barnes & Noble’s Nook line. We’re still several hours away from learning the truth, but in the meantime some new documents have leaked that make the case for what looks to be a gaming tablet, described as the Xbox Surface.

First off, that Nook rumor sounds dead in the water; Barnes & Noble has confirmed it will have no part in today’s event.

As for this Xbox Surface, the documents describe what appears to be a new Xbox system, running twelve cores at 3.1GHz and featuring 5GB of RAM. Alongside this “stationary computing device” there would be a seven-inch tablet, echoing the sort of strategy Nintendo is adopting for its next-gen Wii U. The spec sheets give it a 720p display, connectivity over WiFi and Bluetooth, and a battery capable of holding a seven-hour charge.

The tablet would be powered by IBM and TI chips, and may feature some sort of Kinect-like imaging system. Supposedly, the device would have a scant 288MB of RAM, but while that sounds like a pittance for a general-purpose tablet, it might be appropriate for a gaming-only focus, especially without multitasking.

If this is really what we’re going to learn about today, it’s not quite the sort of news we were hoping for, but it should be interesting to hear, all the same. Of course, these documents, even if they’re legitimate and up-to-date, just might not be what Microsoft’s planning to discuss at all; we’ll know soon enough. 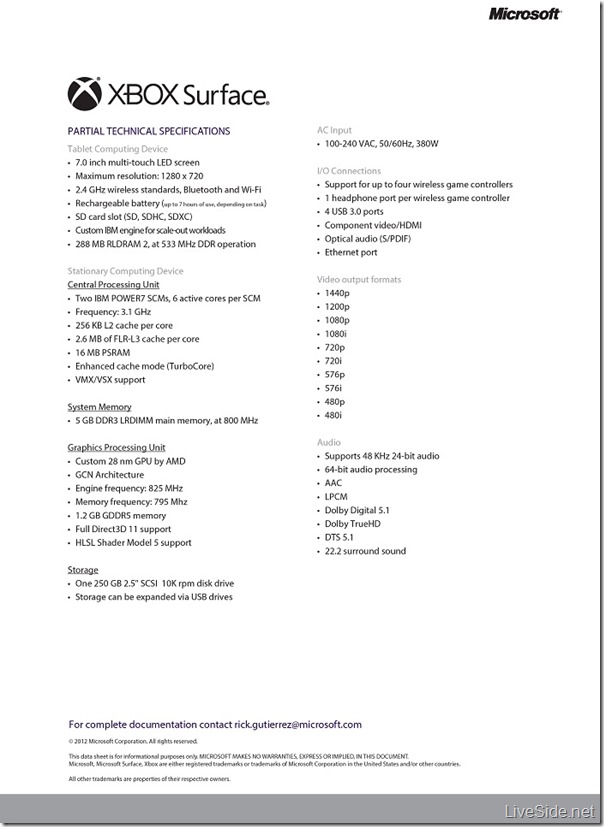