At Microsoft’s 10/26/2016 event we got to see some new hardware and some Windows 10 software updates that will be coming soon. If you’d like, you can watch the full event live stream on demand right now.

Microsoft got to show off some new features for their Windows 10 Creatives Update coming in the spring, as well as a spec boost for the Surface Book, and a completely new type of desktop computer called the Surface Studio. It seems like Microsoft is really targeting content designers and creatives right now and that’s a pretty good idea.

Creative people have long been Apple Mac fans since really early on, the Macintosh was designed to work well with postscript printers.  Today, Apple has become more of an iPhone company and has neglected its roots in the creative design fields. Apple would now rather have a huge mass-market appeal as opposed to the small niche market of graphic designers it once commanded years ago.

That leaves a bit of an opening for someone to target the people who design all the stuff that everyone else uses every day. 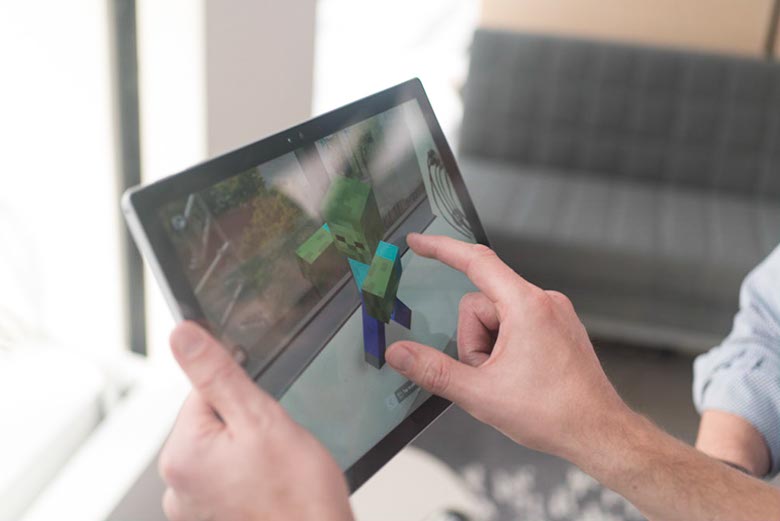 When the Surface team first released the original Surface Pro, digital artists screamed for adding pressure sensitivity support for the stylus into Adobe Photoshop, Corel Painter, etc. It may have been at that moment when Microsoft realized that digital artists and content creators could be a really good market to cater to.  With the Windows 10 Creatives Update, that mindset of content creation has spread to the actual operating system.  While, 4 years ago, all we really wanted were proper stylus drivers to use our Surface Pens with pro graphics programs, today Microsoft is making the whole operating system better suited to all the potentially creative people out there.

3D creation and consumption is a big part of the Creatives Update. The new MS Paint 3D will let anyone easily work with 3D objects, add image maps, create shapes, and position them in three dimensional space. You will also be able to scan real world objects using a phone camera and special software, then bring that into Paint 3D for further editing.  Maybe you want to create something in Minecraft it print it into a real 3D plastic toy. Or maybe you want to make it an augmented reality hologram.  All of that is going to be possible and simple soon.

The Windows 10 Creatives Update is expected to be available for free to all Windows 10 PCs in the spring of 2017. 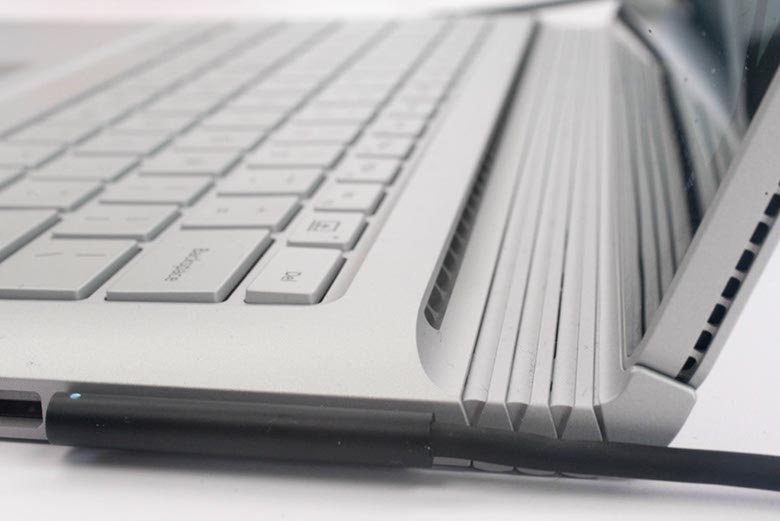 While the Surface Book released last year had some pretty great specs and configurations, there were a lot of people who wanted even more power. So, Microsoft upgraded basically the base keyboard section of the Surface Book so that now you can get a Core i7 version with a much better GPU and more batteries to bring the battery life up to 16 hours. The internals were redesigned for extra cooling and you can see that the base is a bit thicker near the hinge with a new ventilation system. Oh, it also still has an Escape key.

The Surface Book with Performance Base (as it’s called) will be available November 10, 2016. 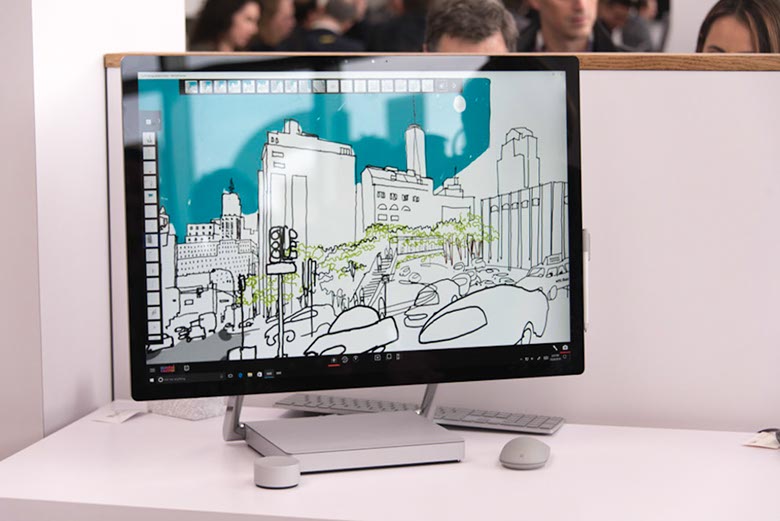 Here’s where things get really interesting. This is Microsoft’s first desktop PC product. At first it looks like an iMac clone that runs Windows 10, but it really goes way beyond that. It’s more like a large Wacom Cintiq pen/touch display with a computer built in, except it’s much more attractive and has a few other awesome tricks up its sleeve that are really going to appeal to designers and creatives. Honestly, I think the Microsoft Surface team built this just so they could use it to design more products. If other people want to use it to design more stuff, that’s fine too. 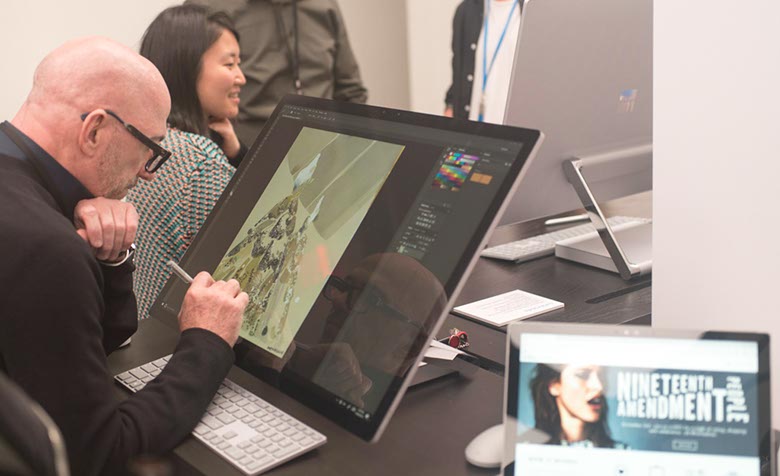 Of course, the Surface Studio works with the same Surface Pen used by the Surface 3, Pro 3, Pro 4, and Book, but it’s got a ginormous 4.5K resolution 28″ 3:2 aspect ratio “True Color” screen.  “True Color” is just a marketing term, so what you really want to know is that it displays the full Adobe RGB 1998 color gamut. That’s a pretty big deal, but there’s also a quick action button that lets you toggle between Adobe RGB, sRGB, and DCI-P3 color gamuts depending on what scenario you’re designing for. Oh, and it’s a 192 dpi screen with 1:1 scaling meaning that if you’ve got an 8.5 x 11″ inch document zoomed to 100% on the screen, that’s exactly the same size as it will look when you print it in real life. That’s going to be extremely useful. 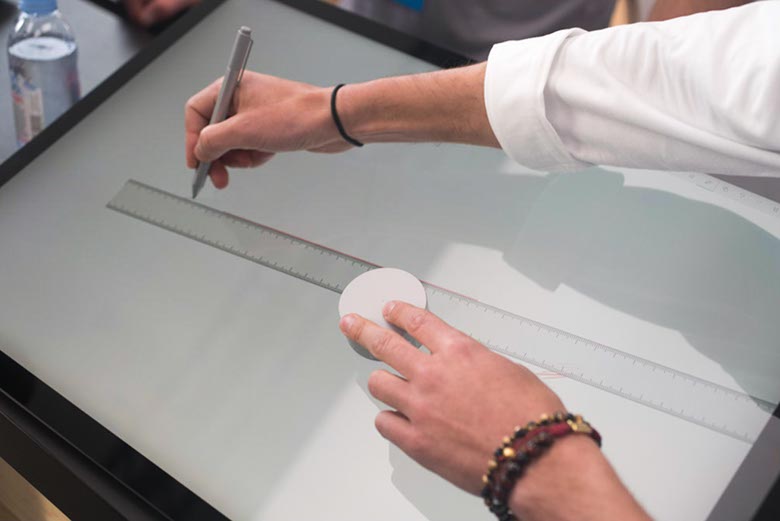 Another innovative thing about the Surface Studio is the new hardware “Dial”. It’s got Bluetooth so you can use it while it’s sitting on a desk, but there is also a copper capacitive pattern in the base which is recognizable by the screen.  So you can place it on the screen and press or turn the dial to active a host of different functions. Developers can add special functions to the dial to create their own controls for things like changing colors, changing brush thicknesses, scrolling through menus, changing numeric fields… the possibilities are endless. 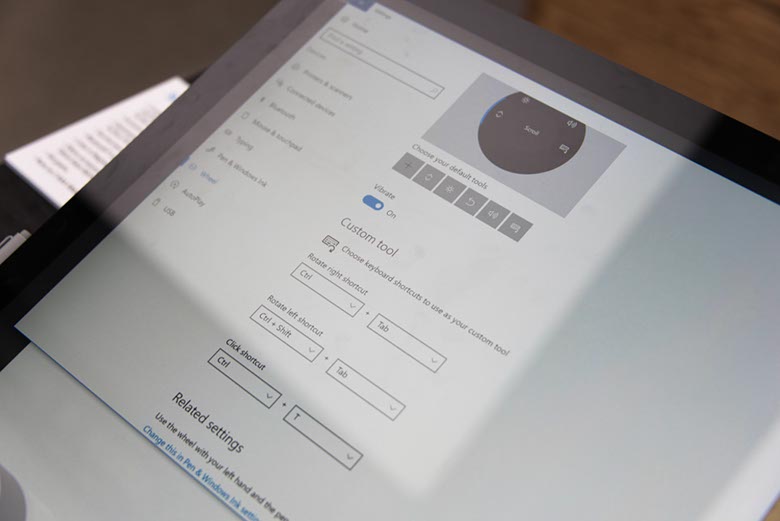 Above is the system-wide control panel for customizing the dial. You can add specific functions to it that will work throughout the regular operating system and within programs that don’t have special features added to it.

Check out the latest deals on Apple’s 12.9 and 11-inch iPad Pro models, as well as the more affordable 10.9-inch iPad Air

Microsoft shared more details today, and also released the feature to Windows Insiders in the Beta channel, there’s a small catch however.