“It’s going to seem familiar, but it’s going to feel different.” Microsoft Corporate VP of Devices Panos Panay nailed the preview of the Surface Studio all-in-one PC, a familiar but unique and, let’s be honest, gorgeous product meant to “bring your ideas to life” on a massive 28-inch PixelSense display with 3:2 aspect ratio and “over a billion possible colors.”

This is billed as the thinnest LCD monitor ever built, at a breathtaking 1.3mm, with 13.5 million pixels in tow, or “63 percent more than a 4K TV.” Moving on to clearer, slightly less bombastic specifications, it appears the Microsoft Surface Studio offers 32GB RAM, NVIDIA GeForce 980M graphics, and a monumental 2TB internal storage space.

You also get plenty of connectivity options and ports, including Ethernet and USB 3.0, as well as Dolby Audio Premium sound enhancements. All forged in robust aluminum, sustained by discrete yet elegant chrome arms designed to “completely fade into the background.”

What will not fade is your voice when talking to Cortana even from across the room, thanks to a powerful built-in mic array. There’s also an HD Surface Studio camera at the top, which obviously supports Windows Hello, and its overall performance is about much more than specs, with no less than 12,000 3DMark points proving its overwhelming graphics prowess. 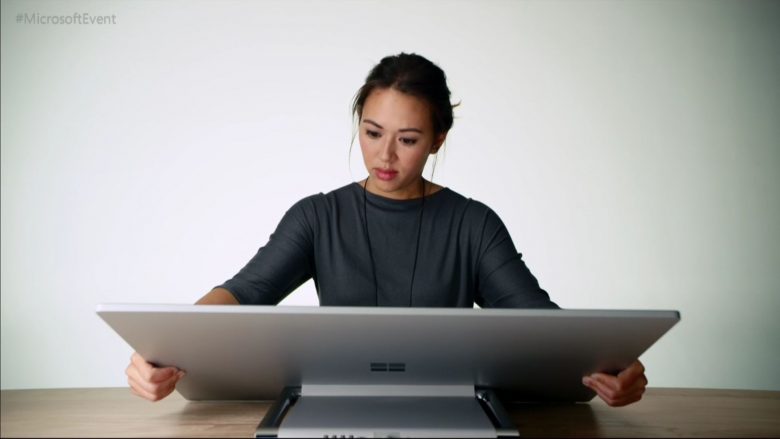 But wait, there’s more. Like last year’s Surface Book, the Studio is surprisingly malleable, letting you push the top of the display to fold down almost entirely flat on your table. Courtesy of a zero-gravity hinge, custom-tuned springs, and 20 degree drafting angle, this bad boy is truly “a new way to create, a new way to produce”, seamlessly turning your desk into, well, a studio.

Today’s best deals come from Amazon and eBay, where you will find the latest M1-powered Mac mini, Samsung devices, and more on sale

Ever since Microsoft announced that Windows 11 will support Android apps, we’ve been anxiously waiting to get our hands on the new feature and try it out.
YouTube 1.8M
Facebook 570K
Twitter 197K
Instagram 133K
RSS